‘My soul belongs to the Lord and my body and my honor to my country,’ says heavyweight champion after joining Ukrainian defense battalion 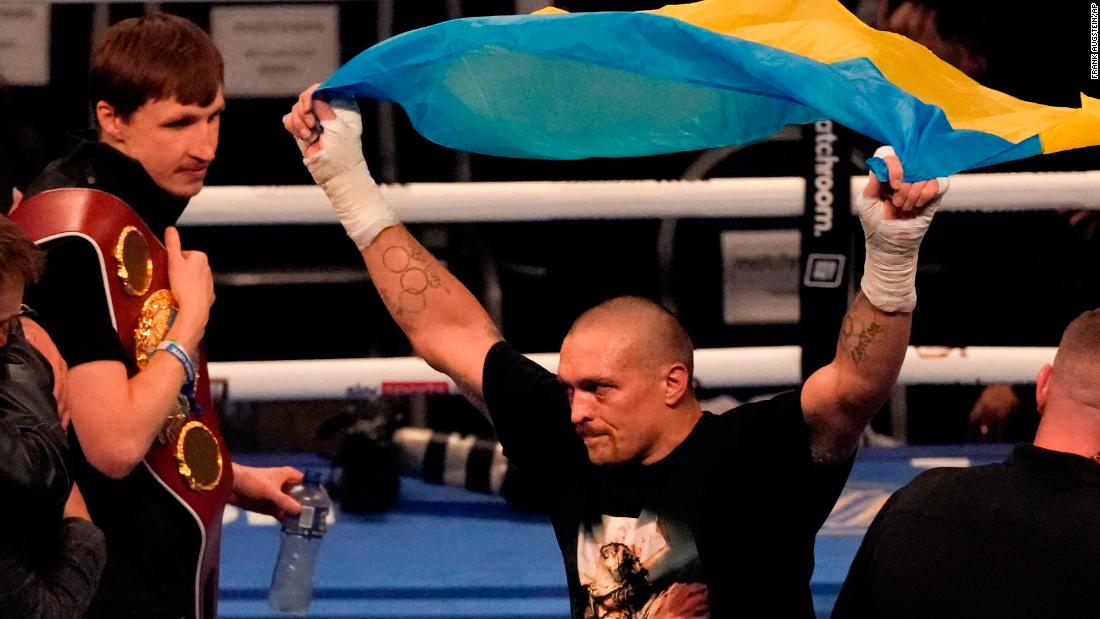 Between them, the 35-year-old Usyk and the 34-year-old Lomachenko won three Olympic gold medals and have since established themselves among the elite boxers in the world.

But now they are facing a very different fight — an existential one — for the very future of their country. Since Russia invaded Ukraine on February 24, Usyk and Lomachenko have traveled into Ukraine, taken up arms and joined the territorial defense battalion.
Speaking via a video link from a basement in Kyiv, Usyk exclusively told CNN that it’s not just invading forces he needs to look out for, but looters as well. He says that he’s prepared to take a life, if necessary.

Usyk’s manager, Egis Klimas, helped coordinate the interview and translated for Usyk, who doesn’t speak English. Despite the terrifying situation that many Ukrainians now find themselves in, Usyk says that he isn’t afraid.

“Maybe, it’ll sound sentimental,” he explained, “but my soul belongs to the Lord and my body and my honor belong to my country, to my family. So there is no fear, absolutely no fear. There’s just bafflement — how could this be in the 21st century?”

He’s not in Ukraine to box right now, but the noble art is still useful in this moment. “It has helped me to be calm and mentally prepared,” he said, “And it helps me to help others who are panicking and nervous.”

Both men were outside of the country when Russia invaded; Usyk had been in London, shooting sequences for an upcoming video game.

He was intending to fly home just hours after the hostilities had commenced, but with the airports closed, he instead flew to Warsaw in Poland and drove almost 500 miles back home and over the border to Kyiv.

Lomachenko had been visiting a monastery in Greece and returned home the next day. Instead of flying directly to his hometown of Odessa, he traveled to Bucharest in Romania, then drove for nine hours to the port and caught a ferry into Ukraine.

Their manager told CNN that he didn’t know they were thinking of taking up arms until they had already signed up for the defense battalion. Former world boxing champions, Vitali — who is also the Mayor of Kyiv — and Wladimir Klitschko, have also taken up arms in defense of their nation.

‘The bombing around is crazy’

Lomachenko was scheduled to speak with CNN at the same time as Usyk but wasn’t responding to the calls from his manager at the time. Early Wednesday morning local time, Klimas confirmed to CNN that Lomachenko was safe and sound.

He and Usyk remain close: they are godfathers to each other’s children and celebrate family birthdays together. Six days into the war, Usyk knows that nowhere is safe anymore in Ukraine.

“The bombing around is crazy,” Usyk said. “They just bombed the city of Mariupol, one of my friends got a rocket in his roof. [The Russians] are not playing games.”

As the fighting rages, so too does the debate about whether Russian athletes should be sanctioned for the actions of their country. Usyk chose not to weigh in directly, suggesting that there are innocent people on both sides of the conflict.

Usyk has only just become the IBF, WBA, WBO and IBO world heavyweight champion. In September, he defeated Anthony Joshua in London in a superb boxing display to claim the belts. His manager says that talks of a rematch this summer are at an advanced stage.

The lightweight Lomachenko has previously been world champion in three different weight classes and was planning to fight George Kambosos in Australia in June.

But understandably, boxing is the last thing on their minds.

“I really don’t know when I’m going to be stepping back in the ring,” said Usyk, who looked exhausted and emotional in his interview with CNN. “My country and my honor are more important to me than a championship belt.”

Usyk has three children and, during the interview, the sound of young voices could be heard playing behind him in the basement.

He says that family, friends and neighbors have been sheltering together. “When there is an air raid alarm, we hide. Of course, it’s fun when there are a lot of us here — we’re having fun. But we’re forcing ourselves to have fun.” They’re trying to keep the mood light for the kids.

But in a separate conversation with CNN, Usyk’s manager Klimas emphasized the gravity of the situation: “They’re in big danger. When the bullets start flying, the bullet doesn’t care if you’re a world champion. The bullet just goes through.”