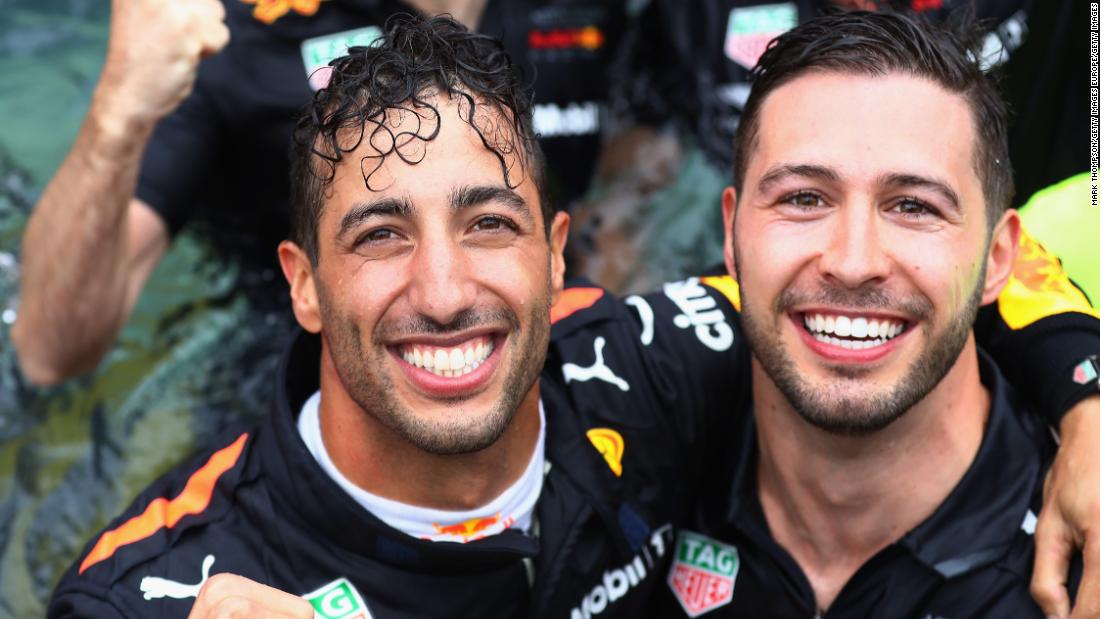 That message came from Formula One Daniel Ricciardo at the end of 2017, who wanted Italiano to travel the world with him as his performance coach.

The pair, who had met through mutual friends in Perth at the age of 12, hadn’t discussed the possibility of working together before, and most of Italiano’s experience of F1 had come from following Ricciardo’s rise through the motorsport ranks over the years.

The learning process entailed picking the brains of those around him in the F1 paddock, as well as scouring Google Scholar for any available information on the physical demands of driving headlong around a track for two hours.

But Italiano’s responsibilities don’t stop with drawing up fitness sessions for the 32-year-old Ricciardo.

An F1 performance coach is charged with ensuring their driver is in prime physical and mental condition at the start of every race — something that means the pair spend 250 days of the year together.

Italiano takes responsibility for massages, nutrition, sleep, jet lag, mindfulness and anything in between to ensure race weekends run smoothly.

“Little things like that really add up […] giving him a schedule so that he doesn’t have to think […] kind of running his week so he can just focus on racing.”

The pair are now coming off the back of a three-month preseason in preparation for the first race of the season in Bahrain on Sunday.

Italiano has worked on building Ricciardo’s neck strength — a crucial requirement for drivers to withstand the G-force of tackling sharp corners at high speed.

And as the sport advances, engines get bigger and cars get faster, placing more demand on a driver’s body each year, according to Italiano.

“It’s not about just hitting the markers with their neck strength; every year, they need to hit PBs [personal bests] pretty much,” he says.

“A typical corner on an F1 course might see drivers fighting against four to five G, which is about pulling roughly 35 kilos [77 pounds] on your neck — quite a big load.

“You might think, ‘Okay, it’s a corner, it only lasts for one to two seconds.’ But you’re doing it for two hours, so it can add up quickly.”

In an attempt to build Ricciardo’s neck strength, Italiano says he’s studied other sports like the NFL, boxing and rugby for inspiration, while he also carries a neck harness with him throughout the season for flexion and extension exercises.

“These guys are under tension in the body pretty much for two hours. They’re fighting the car and the vibrations of the car, the resistance of the car,” says Italiano.

That means whole-body strength and cardiovascular fitness become an important factor, too.

“These guys are in fire-resistant suits, they don’t breathe,” Italiano continues. “All of a sudden, thermoregulation of the body — the ability for the body to cool down — is heavily restricted.

“They’re low to the ground, the bitumen is so hot; they’ve got an engine behind them, which is bringing in more heat.

“The ability to cool down is just non-existent […] You start becoming dehydrated, you start lacking fluids, you start to fatigue.

“And if you start to fatigue, your reaction times start to hinder. That starts happening, you start losing one or two tenths per lap in a Formula One race. It could be the difference between a podium and finishing in the top 10.”

In the gym during preseason, Italiano has tasked Ricciardo with cardio sessions (running, rowing and cycling), strength exercises (deadlifts, squatting and bench-press) and core stability training.

“We also emphasize training on the posterior chain [muscles on the backside of the body] because a lot of the braking loads — when they’re smashing that brake with their left foot — is going through the calves, hamstrings and glutes,” says Italiano.

Italiano’s influence extends to Ricciardo’s diet during race weekends — meeting with the McLaren team chef to provide guidance on mealtimes, recipes and portion sizes — adapting to hot climates and high altitudes, and assisting with recovery from travel and jet lag.

“We hired a bit of a jet lag guru and we also have a jet lag app, which helps a lot with caffeine timing, light exposure, adapting to the time zone,” he says.

“The meal timing on a flight is a big one, and also exercise timing when you land can aid with sleep and getting on the right time zone. There are a lot of factors that affect jet lag. It was the number one thing we really, really tried to hone down on.”

Then there’s also mental preparation during a race weekend.

“Something we talk a lot about is getting to that flow state on a Sunday,” says Italiano. “The Wednesday or Thursday, it’s get everything off your chest day, where it’s like: ‘OK, mate, what’s bugging you? What’s on your mind?’ Just get it off your chest.

“Qualifying, I like to get Daniel in a very calming state of mind because qualifying is about just perfecting the one lap. And Daniel, he performs very well in a relaxed state for qualifying.

“Whereas race, we want him at an intensity level of about seven out of 10, we don’t want him too intense because being too fired up can actually make your reactions worse if you’re too fired up.”

Come Sunday when the checkered flag falls at the start of the Bahrain Grand Prix, Italiano will be hoping that his painstaking preparation — from calf strength to cardio, squats to sleep schedules — bears fruit.

Ricciardo, who placed eighth in the driver standings last season, tested positive for Covid-19 last week, but has recovered in time to compete in this weekend’s race.

Italiano juggles his work as Ricciardo’s performance coach with his own online coaching platform, MI Coaching, which seeks to make elite-level performance training accessible to the public.

But F1 remains the priority. He anticipates there will be plenty of nerves as the season gets underway on Sunday, but excitement and curiosity, too.

“There is an element of uncertainty and unknown,” says Italiano, “not knowing which teams have made gains and which teams are a step behind. I find it quite intriguing.”

Those emotions are always accompanied by a sense of pride when he watches Ricciardo take to the racetrack.

“It’s been a massive inspiration to see a guy from the same city as me on the world stage,” says Italiano. “It’s just inspiring to be with him and then also helping him. It gives me belief as a coach as well.”