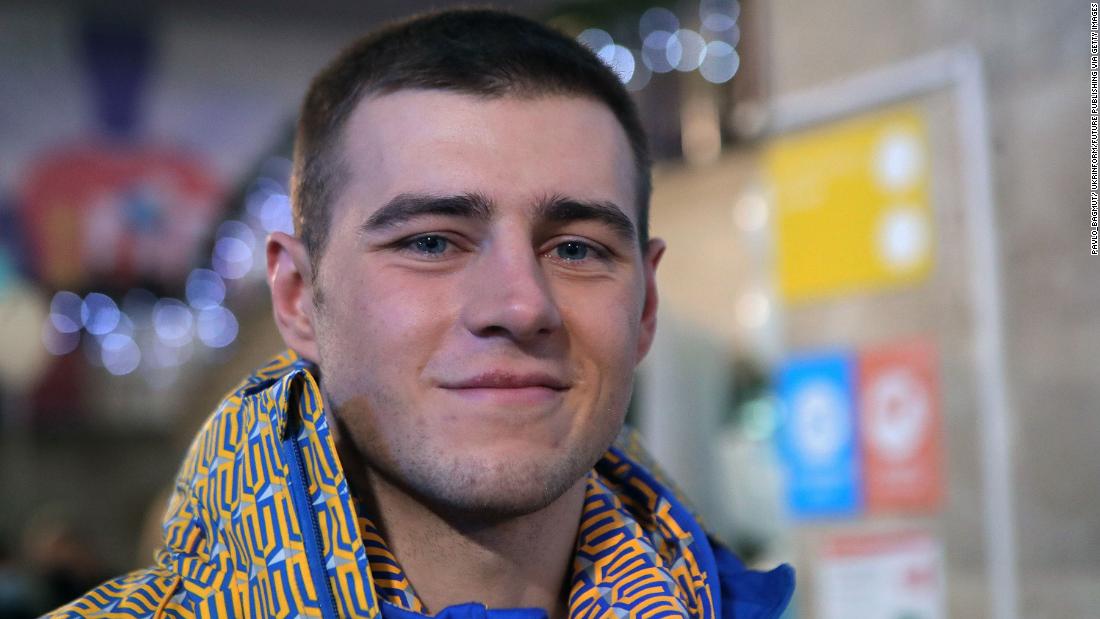 Heraskevych made headlines in Beijing when he held up a “No War in Ukraine” banner to protest the impending Russian invasion, a nightmare realized when the conflict began less than two weeks later.

Since then — as has been the case for so many of his compatriots — the 23-year-old’s life has been turned upside down.

In the capital of Kyiv on the day of the invasion, Heraskevych had initially tried to enlist in the Ukrainian army but was unable to do so as all positions had been filled and he lacked military experience.

Determined to do his part, Heraskevych returned to his father’s hometown of Zhytomir from Kyiv on Monday, having driven a van 150 kilometers to hand out medical supplies and food.

“I was close to fire points, you can literally see rockets — Russian rockets — being destroyed by our Ukrainian air defense,” Heraskevych told CNN Sport’s Amanda Davies.

“It’s very scary and absolutely crazy that now in the 21st century, in the middle of Europe, we can see this. We need to stop this war.”

With many of the roads destroyed, what would typically have been a three-hour drive took more than seven.

Regular checks from the Ukrainian military to inspect passport documents and baggage dotted the journey, with scenery frequently marked by destroyed buildings, as well as burnt vehicles.

“You see a lot of destroyed cars because a lot of spies — Russian spies — try to move in the city and our military try to stop them,” Heraskevych said.

‘You can’t be ready for war’

Heraskevych’s volunteering efforts have formed part of his broader goal to help his people by use of his platform as an athlete, a profession and a former life that now seem a million miles away.

As Russian troops amassed at the Ukrainian border in early February, the 23-year-old’s sign in Beijing — held up to television cameras at the end of a run — proved to be one of the defining moments of the Games.

However, Heraskevych admitted that, at the time, he didn’t expect events back home to escalate so far, so fast.

“At that moment, when I showed the sign, we knew that a lot of troops were near our borders, but you can’t be ready for war,” Heraskevych said.

“You can’t expect it. Till the end, till the 24th of February, all Ukraine and the whole world expects that world war doesn’t start — it’s an absolutely crazy feeling.

“A lot of deaths in the country, a lot of friends already being lost … it’s an absolute nightmare.”

Since returning from Beijing, he has worked with Global Athlete, an international start-up movement created and run by athletes to “inspire and lead positive change in world sport.”

Heraskevych added that he has spoken to a number of fellow athletes to discuss the conflict, alongside a number of media appearances to raise awareness of his country’s plight.

“I’ve just been trying to work in my area, in sports,” Heraskevych said.

“Everything feels so far away. Your whole life you try to achieve something and you go step by step, but this ladder is broken now and now your whole life goes in a different direction.

“Athletics feels so far away and not necessary at all, I just have to focus on the life of my family and my friends, my own life and the lives of other Ukrainians. I just think about how to stop the war and these many victims.”

In a video shared to his Instagram on Friday, Heraskevych said that he would “never forget those who kept silent about the war,” and the skeleton star is particularly confused by the response of some fellow athletes.

“I can’t understand why they stay quiet or why they support this war,” Heraskevych said. “It’s super scary for me.

“I just don’t understand it because it’s people who I know and they stay quiet. I’m sure that they know what is happening now.”

‘It’s crazy to support the killing of your friends’

Earlier this month, Russian gymnast Ivan Kuliak was widely criticized outside of his country — and by the International Gymnastics Federation (FIG) for “shocking behavior” — for wearing the pro-war ‘Z’ symbol on a podium next to a Ukrainian athlete.
Meanwhile, swimwear maker Speedo has recently ended its sponsorship deal with two-time Olympic gold medal swimmer Evgeny Rylov after the Russian attended a rally hosted by Russian President Vladimir Putin.

For Heraskevych, athletes that support the war and Putin are a “powerful tool” of Russian propaganda and should be banned from international sport.

“They are very powerful tool of Russian politics and propaganda and when these people support war, a lot of people in Russia also start to support this war,” Heraskevych said.

“It’s unbelievable when you see the posts of the athletes you compete with, and they support the war, I mean I understand that propaganda works but it’s crazy, it’s crazy to support the killing of your friends.”

“They should be banned … because the main mission of sport is to bring peace and unity to the world, not war.”

For now, Heraskevych is content to do what he can and ensure the continued safety of his family in Zhytomir. Though the city suffered intense shelling earlier this month and the sounds of the conflict are still within earshot, Heraskevych said it is “quiet” compared to other areas of the country.

However, he insists that if called upon, he will defend Ukraine “in the way that is needed.”

“If needed, I will go and defend my country in the way that is needed, but everyday the situation changes very quickly.”