Analysis: ‘Bridgerton’ returns with Regency-era romance that simmers just beneath the surface 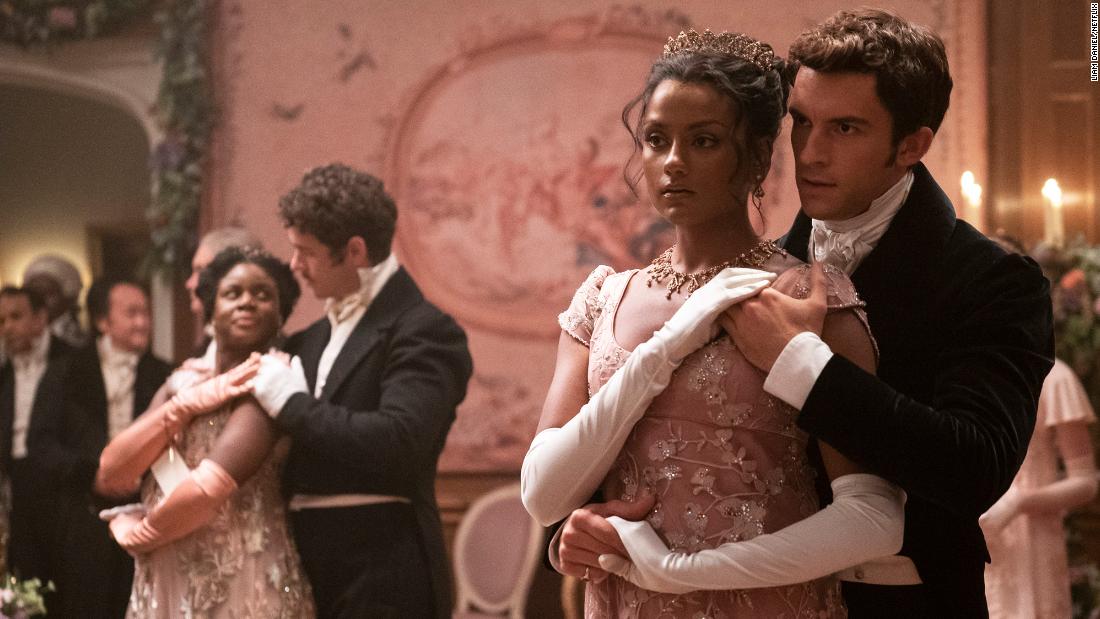 Not just because of the beautiful gowns of that time period, but also because of her ability to know everyone’s business and secrets.

I’ll admit to being nosy. And I suspect you, too, enjoy being in the know, dear reader.

The first season of “Bridgerton” was superhot and gave us a new group of stars.

Season two looks like it may do the same.

The plotline this season is the romance between Lord Anthony Bridgerton (Jonathan Bailey) and Kate Sharma (Simone Ashley) — complicated by the fact that he looks to be initially matched with her younger sister, Edwina (Charithra Chandran).

Marrying the heir of the Bridgerton family is serious business, and you can check out season two now on Netflix.

Leave it to Donald Glover to bring his FX series back after almost four years with a debut episode that doesn’t focus on the main characters.

Instead, the season kicks off with a storyline that is sure to remind some of the tragic demise of the real-life Hart family, in which Jennifer Hart drove her wife and their six adopted children over a cliff in Mendocino County, California.

Season three isn’t even centered on the city for which the show is named. It takes the main characters to Europe as rapper Paper Boi (Brian Tyree Henry) is joined on tour with his friends, manager Earnest “Earn” Marks (Donald Glover) and Darius (LaKeith Stanfield).

It’s the kind of creativity we have come to expect from the show, which returned Thursday on FX and is also available to stream on Hulu.

Grammy-nominated singer-songwriter Olivia Rodrigo takes us on a road trip from Salt Lake City — where she began writing her debut album “Sour” — to Los Angeles.

Along the way, she recounts the memories of creating her debut album. She also shares her feelings about navigating life as a young aspiring pop star.

Through new arrangements of her songs, interviews and never-before-seen footage, “Sour” is transformed into a cinematic event.

It debuted Friday on Disney+.

Even though he is well known for reinterpreting other artists, you wouldn’t think that Michael Bublé would do a cover of Barry White.

But here we are.

Bublé does just that in his 11th studio album, “Higher,” which dropped Friday.

The smooth crooner does his version of White’s “You’re the First, the Last, My Everything,” as well as a few others, including covers of Bob Dylan and Paul McCartney.

“I categorize myself as a soul singer who loves the great American songbook, but loves writing pop songs,” Bublé told The New York Times. “It’s a very strange place to live.”

Maren Morris has a plethora of fans who can’t get enough of her country tracks but also those who love her massive pop hit “The Middle” with Zedd and Grey.

Her newest album, “Humble Quest,” feels pretty introspective, with its ballads and nods to her husband, fellow singer-songwriter Ryan Hurd.

It’s a great reminder as to why Morris has become such a darling of Nashville.

“Humble Quest” is now out. Morris will celebrate with a livestream, “Maren Morris: Live From New York,” on Amazon Prime and the streaming service’s Twitch channel Saturday.

Lizzo continues to live out loud and bring others along for the ride.

Her new series, “Lizzo’s Watch Out for the Big Grrrls,” finds the zaftig singer seeking plus-size dancers to join her on tour.

“Girls that look like me don’t get representation,” Lizzo said in the trailer. “Time to pull up my sleeves and find them myself.”
I’ve written about Lizzo and the attention given to her body, and I love seeing her give a spotlight to others in a lesson about both self-love and acceptance. Plus, it’s a good reminder that big girls can be professional dancers, too.

The show started Friday on Amazon.

I often think about how stressful being famous must be, but Hanks is a great reminder that you can do so with grace and humility.

The megastar has been filming a movie in Pittsburgh and having the sweetest interactions with those who live there.

Whether joining a bride and her bridesmaids for some photos or taking a break to chat with a local woman and her toddler, he clearly realizes these meetings will be something people coming into contact with him will never forget.

Hanks has done it before, crashing a wedding last year in Santa Monica, California, to the delight of the wedding party.

Thank you, Tom Hanks, for once again reminding us of the power of connection and how much we all need it right now.