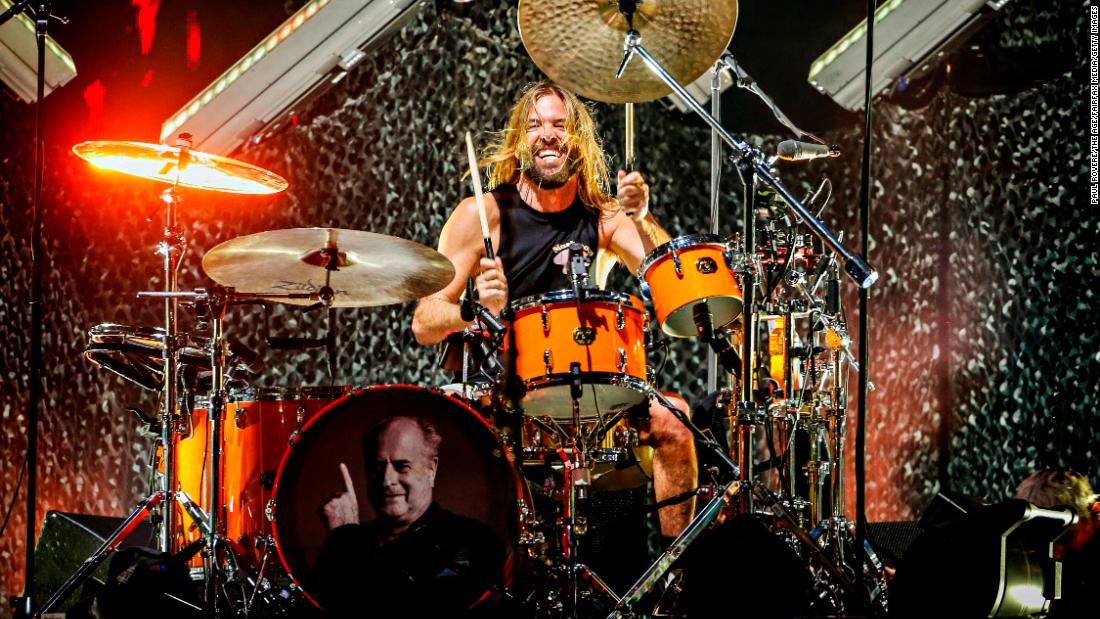 And Blink 182 drummer Travis Barker remembers Hawkins as a man who helped persuade him he had potential.

They and scores of others in rock and music royalty have been collectively struggling with the news that Hawkins is gone.

Hawkins, the longtime drummer for recent Rock & Roll Hall of Fame inductees the Foo Fighters, has died at age 50, his band announced Friday, shortly before the group was to play in Colombia.

The cause of death was not immediately disclosed.

Hawkins’ death has drawn an outpouring of sorrow on social media from fellow musicians and fans. His fellow drummers, especially, expressed a kinship with him.

Hawkins had previously said Taylor spurred his desire to get behind the kit: “I wanted to be Roger Taylor and I wanted to be in Queen,” Hawkins told Anderson Cooper for “60 Minutes” in 2014.
“Like losing a younger favourite brother,” Taylor wrote Saturday on Instagram. “He was a kind brilliant man and an inspirational mentor to my son Rufus and the best friend one could ever have. Devastated.”

On Instagram, Blink 182’s Barker recalled his early drumming days, when he was cutting his teeth in California’s Laguna Beach while Hawkins drummed for Alanis Morissette in the mid-1990s

“You’d come watch me play in dive bars and be like, ‘kid you’re a star.’ And I thought you were crazy but you gave me so much hope and determination,” Barker wrote.

“Years later we toured together with Blink and Foo’s in Australia and I have the best memories of smoking cigarettes in the restroom of flights we were on together and watching your set every night. To say I’ll miss you my friend isn’t enough. Till the next time we talk drums and smoke in the boys room … Rest In Peace.”

Lars Ulrich, the Metallica co-founder and drummer, thanked Hawkins on Instagram “for always having the biggest warmest smile on your face and for lighting up every room with your infectious energy and good vibes.”

Ulrich recalled a phone conversation the two shared a week ago: “I will always be appreciative for you championing our community as in your parting words … ‘Drummers stick together!'”

“Damn right brother. Except now the community is lesser without you,” Ulrich wrote.
The Roots drummer Questlove tweeted he is “so sad about this man.”

“Coolest dude ever,” Questlove wrote about Hawkins. “God bless & comfort his family, his bandmates, his friends & all his loved ones. … Rest In Beats.”

Matt Cameron, the Pearl Jam and ex-Soundgarden drummer, wrote Hawkins “brought so much joy and happiness to my life.”

The Foo Fighters had been scheduled to play at Lollapalooza Brasil on Sunday. Miley Cyrus is also on the bill, and said in an Instagram Story that she would dedicate her performance in São Paulo to Hawkins.

She also shared a photo of Hawkins playing the drums, captioning it, “This is how I’ll always remember you.”

Aerosmith’s Steven Tyler and Joe Perry separately posted photos of themselves with the Foo Fighters drummer on Instagram.
Rage Against the Machine’s Tom Morello tweeted: “God bless you Taylor Hawkins. I loved your spirit and your unstoppable rock power. Rest In Peace my friend.”
Joan Jett, friend of the Foo Fighters and frontwoman of Joan Jett & the Blackhearts, wrote on Instagram: “We are gutted to hear about the passing of our dear friend Taylor Hawkins.”

“He was an incredible musician and the kindest, warmest person who always had the biggest smile in the room,” Jetts’ statement reads. “We send our love to his wife, children, Dave, Pat, Chris, Rami, Nate and the entire Foos’ Family. We love you guys and we will miss Taylor immensely.”