Seborga: The Italian village that wants to be a country 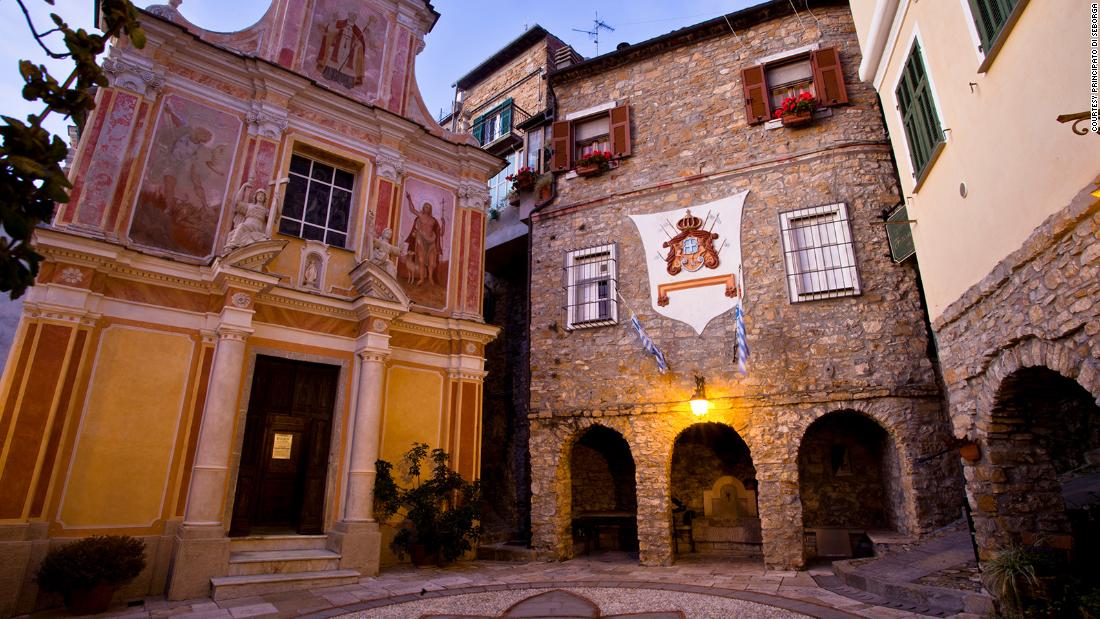 Editor’s Note — Sign up to CNN Travel’s Unlocking Italy newsletter for insider intel on Italy’s best loved destinations and lesser-known regions to plan your ultimate trip. Plus, we’ll get you in the mood before you go with movie suggestions, reading lists and recipes from Stanley Tucci.

(CNN) — Atop an idyllic hill in the Italian Riviera sits a tiny village with a big dream: becoming an independent nation.

The Principality of Seborga already has its own flag, national anthem, passports, stamps, currency and, of course, a monarch. It hopes to one day back them up with legal recognition of its sovereignty, which it has been seeking since the 1960s.

For now, however, Seborga is simply a picturesque hamlet in the northern Italian province of Imperia, close to France, with just over 300 residents and covering about five square miles of land.

The road that leads up to town has an unofficial border crossing, complete with a sentry box painted in the colors of Seborga’s flag, which on occasion is manned by self-proclaimed border guards.

Beautifully positioned, Seborga gets stunning views of the Riviera below, including the Principality of Monaco — perhaps the world’s most famous microstate and an inspiration for Seborga’s continued quest for independence.

“The lawyers are working on it,” says Her Serene Highness Princess Nina of Seborga, “that’s why I got elected Princess.”

In Seborga, where the monarchy is not hereditary, elections take place every seven years and Princess Nina is the first woman to hold the post.

Born in Germany, Nina Döbler Menegatto was living in Monaco when she discovered Seborga 15 years ago with her ex-husband and former prince, Marcello I, who abdicated in 2019.

“Initially I thought the whole story was quite funny and I didn’t take it seriously,” she says about Seborga’s claim to independence, “but then I read into it and it’s all true.”

The claim originates in the early 1960s when Giorgio Carbone, who ran a local co-op of flower farmers, looked into the town’s history and found that something was amiss.

Seborga was donated to Benedictine monks in the year 954, until they sold it in 1729 to the Kingdom of Sardinia, which would later become part of the Kingdom of Italy. But, according to Carbone, there is no historical record of the sale, which means Seborga was never legitimately part of Italy at all.

“It is difficult to think that, almost 300 years later, this absence of documentation is a realistic basis on which to build a legal recognition,” says Graziano Graziani, an Italian expert on micronations. “However, the community that believes in the independence of Seborga bases its demands precisely on it.”

Both the Italian Constitutional Court and the European Court of Human Rights have previously rejected Seborga’s bid, but the princess is undeterred. “It’s obviously not an easy case,” she says. “It won’t happen today or tomorrow, but nothing is impossible: look at Brexit.”

Princess Nina, center, is elected to her royal position.

Princess Nina concedes that the story is good for business. “It’s great for tourism as well, let’s not deny this. Who doesn’t want a fairy tale, a princess and a horse carriage? So yes, it’s a tourist attraction, but it’s also part of the history of Seborga,” she says.

She stresses that there is nothing illegal in the activities of the Principality — passports are just for fun and the local currency, the Luigino, is accepted in shops around town but is essentially a souvenir.

However, Giorgio Carbone, who ruled as Seborga’s first prince until his death in 2009, pushed it a bit further.

“In the 1960s he would close the border and not let anyone up anymore, he refused to pay taxes to Italy and he would drive around with only a Seborgan plate on his car,” she says.

One way or another, these stunts put Seborga on the map, adding tourism to flower farming and olives, the staples of the local economy. Carbone is remembered fondly. “What that man did was incredible, he deserves a monument,” says the princess.

Before taking a hit from Covid, the town attracted tourists from as far as Japan, although with a substantially different vibe from the glamour of nearby Monaco.

“Seborga is the opposite of Monaco in many ways — it’s very down to earth, quiet and magical, and the people who live there are very nature oriented and welcoming,” says Kaidi-Katariin Knox, a Seborgan who’s originally from Estonia. “When you go to the bar in the piazza, you know everybody by name.”

Fittingly for a monarchy, Seborga has had its share of drama. In 2016, Nicolas Mutte, a French national, proclaimed himself the new prince while the royal couple was abroad, in an event described in the local press as a coup d’état.

“Imitators and swindlers are the order of the day when it comes to micronations that have any claim to becoming real states,” says Graziani. “This is probably in order to claim sovereignty and related rights in the event that, in the future, any authority decides to recognize Seborga’s independence — or even just to be able to present oneself as ‘nobility’ from a tiny European state.”

Mutte is only one of several pretenders to the throne that have surfaced over the years. The Principality publishes a list as a warning; it includes social media profiles and websites, often selling merchandise or currency, purporting to belong to the legitimate Seborgan government.
The government itself says that it does not grant anyone titles of nobility, and is made up of just nine ministers, as well as a council of born and bred Seborgans. It does make its own laws, but for now, they don’t carry any legal value and the real power is in the hands of a regularly elected official. “Seborga does have an Italian mayor,” Princess Nina explains. “Officially, we should be at war — but unofficially, we’re friends.”