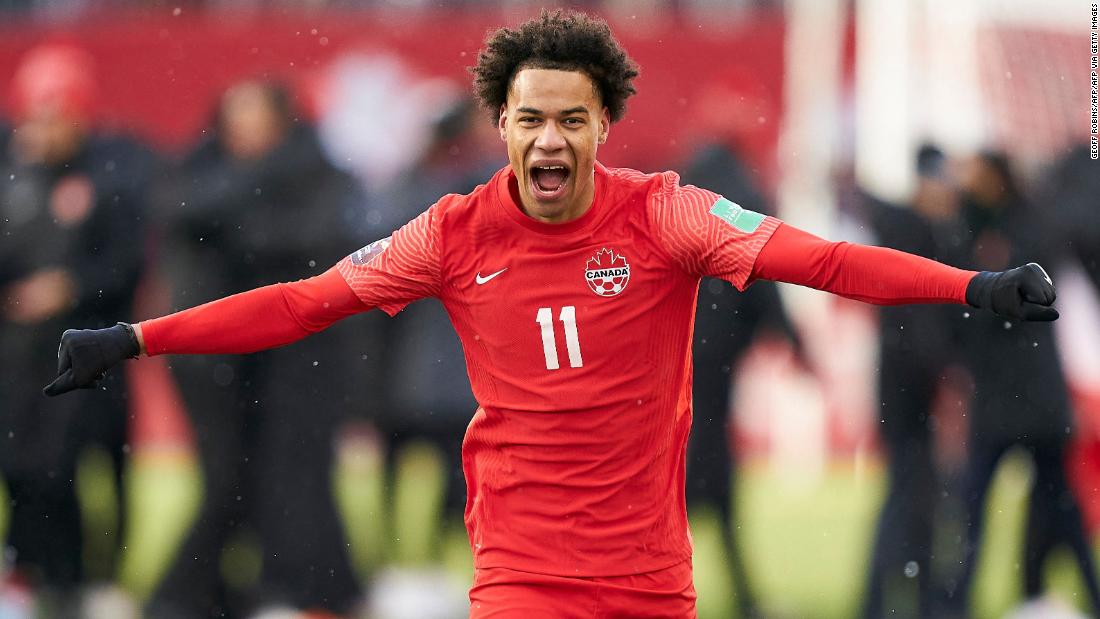 That’s the view of coach John Herdman, the Englishman who has overseen Canada’s steady rise through the men’s FIFA rankings over the past four years.

Canada’s ascension to football legitimacy culminated in a 4-0 victory against Jamaica on Sunday, guaranteeing Herdman’s team a spot at the World Cup in Qatar later this year.

It will be just the second time that Canada has featured at a men’s World Cup having lost every game in the finals of the 1986 edition, but expectations are high this time around.

“We’re going to be ready to go there at the World Cup and put ourselves really on the map,” Hutchinson added. “We’ve got a lot of confidence and we believe that we can do well.”

Sunday’s win in Toronto came courtesy of first-half goals from Cyle Larin and Tajon Buchanan, a flicked finish from Junior Hoilett in the second half, and a late own goal from Jamaica’s Adrian Mariappa.

It was enough to seal Canada’s spot at the World Cup with one game of qualifying — against Panama on Thursday — still to play, as well as gain the approval of Prime Minister Justin Trudeau, who tweeted his congratulations.

Canada leads the CONCACAF qualifying group on 28 points ahead of the United States and Mexico on 25.

The top three teams automatically qualify for the World Cup, while the fourth — currently Costa Rica — must contest an inter-continental playoff in a bid to gain a spot at Qatar.

READ: 64,375 fans welcomed at South Korean men’s World Cup qualifier amid soaring Covid-19 cases
Canada’s success in this year’s qualifying has been spearheaded by a crop of talented young players including Alphonso Davies, Jonathan David, and Buchanan, all of whom play club football in Europe.

The 21-year-old Davies — who has won the Champions League and a number of domestic trophies with Bayern Munich in Germany — has been sidelined since January as he recovers from an inflammatory heart condition having contracted Covid-19, but live-streamed his tearful reaction to Canada’s game against Jamaica.

David has scored 26 league goals in 66 matches for Lille and helped the French side win the Ligue 1 title last year, while Buchanan has recently signed for Belgian team Clue Brugge.

In Larin, Canada also has the country’s top scorer in men’s international football on 24 goals, while Hutchinson holds the record for the most appearances with 94, according to Canada Soccer.

“Look, Canada can,” said Herdman, who took charge of the men’s team in 2018 having previously coached Canada’s women.

“We’ve got Davies playing Champions League finals, we’ve got players playing all over Europe, we’ve got kids coming through the system and we’ve just qualified for a World Cup.”

READ: Italy players are ‘destroyed and crushed’ after failing to qualify for 2022 World Cup following loss to North Macedonia

Under Herdman, Canada has climbed through the FIFA men’s rankings and is currently 33rd in the world — its highest ever position.

“I told these boys right at the beginning, we’ve got to give this country something to believe in,” said Herdman. “They lost hope, they lost faith, but we’re a football country now and they all know it.”

Recent years have seen Canada boost its credentials as a footballing nation.

The women’s team won a first Olympic gold medal with victory against Sweden in Tokyo last year, and in 2018 Canada was chosen to host the 2026 World Cup alongside USA and Mexico.

Having hosted the women’s tournament in 2015, it will be the first time Canada has hosted a men’s World Cup.

After its last qualifying game against Panama on Thursday, Canada will find out its opponents at Qatar 2022 on Friday when the groups are drawn in Doha; then when the tournament gets underway on November 21, it will finally be able to announce its presence among the footballing elite.