These joyous moments from the Oscars shouldn’t be overlooked 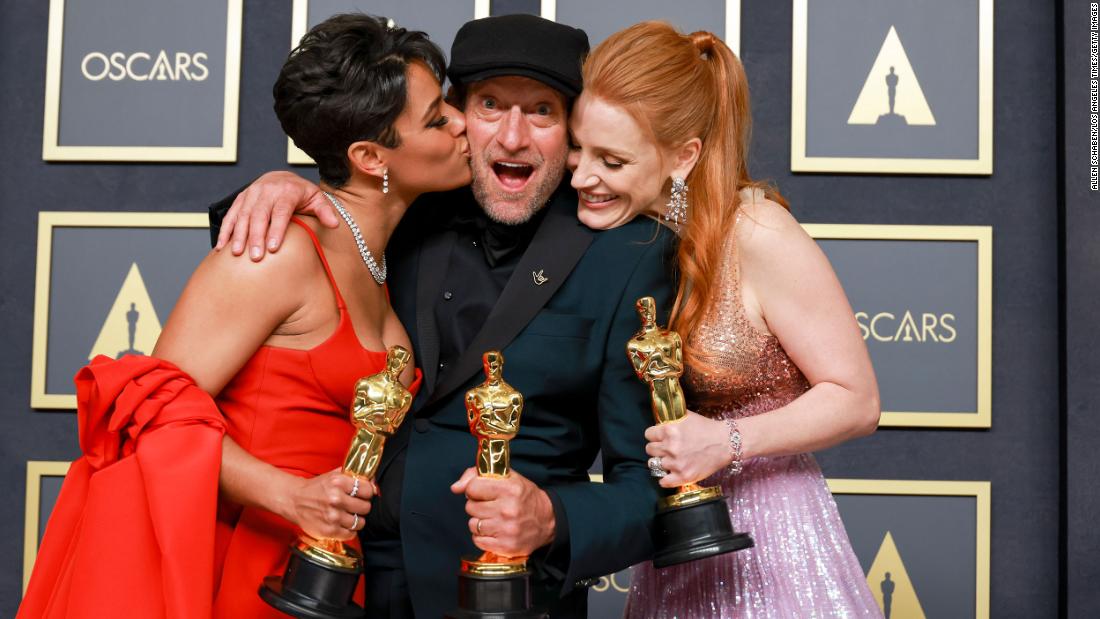 Though a certain slap heard around the world may have stolen the show, this year’s Academy Awards were full of moments that filled us with joy and even moved us to tears.

From Troy Kotsur’s history-making win to a full performance by none other than Queen Bey herself, here are all the memorable Oscars moments that you won’t want to overlook.

For her luminous performance as Anita in “West Side Story,” Broadway veteran DeBose took home the Oscar for best supporting actress, making her the first out queer woman of color to win in her category.
In a concise speech, DeBose spoke to viewers directly: “So to anybody who has ever questioned their identity, ever, ever, or if you find yourself living in the gray spaces, there is indeed a place for us.” (That line also referenced the “West Side Story” song “Somewhere,” whose lyrics were penned by In Memoriam honoree Stephen Sondheim.)

She’s also one of few actors to have won an Oscar for playing the same role as a previous Oscar winner: Rita Moreno won the same award for playing Anita in 1961’s “West Side Story,” and DeBose called the actress her “divine inspiration.”

Only the second deaf actor to ever win an Oscar, Kotsur’s victory for his moving performance in “CODA” was the culmination of an awards season’s worth of often hilarious and emotional acceptance speeches.

The actor first joked that he’d planned on teaching President Joe Biden some “dirty sign language” until his co-star (and the first deaf actor to win an Oscar) Marlee Matlin intervened. He thanked director Siân Heder for “bringing the deaf world and the hearing world together” and tipped his hat to the fishermen of the Massachusetts town where “CODA” was filmed and reminded them to “eat [their] spinach” à la Popeye.

He also emotionally acknowledged his father, who he said was “the best signer in our family” until a car accident paralyzed him from the neck down. Kotsur, who won his Oscar for playing an endlessly supportive father, called his dad his hero.

He dedicated the award to the deaf community, CODAs (or children of deaf adults) and people with disabilities.

“This is our moment,” he said.

Questlove speaks from the heart

Though the most talked-about moment of the Oscars took place mere moments before Ahmir “Questlove” Thompson won his Oscar for “Summer of Soul,” he accepted the award with grace and reminded audiences of the significance of his documentary’s subject matter.

“It’s not lost on me that the story of the Harlem Cultural Festival should’ve been something that my beautiful mother — and my dad — should’ve taken me to when I was 5 years old,” the musician and filmmaker said, choking up when he mentioned his father.

“Overwhelmed” by the win, Quest said he’d reserve his thank-yous for offstage, but ended his speech with, “I’m so happy right now I could cry.”

In a time where the civil rights of transgender people are increasingly under attack, and many states are pushing anti-LGBTQ legislation forward, Jessica Chastain used her time onstage during her best actress acceptance speech to speak up.
Winning for “The Eyes of Tammy Faye,” Chastain said. “We’re faced with discriminatory and bigoted legislation that is sweeping our country, with the only goal of further dividing us.”
Though Chastain, who won her first Academy Award on Sunday, did not specifically mention any states, many took it as a reference to Florida’s so-called “Don’t Say Gay” bill, which was signed into law by Gov. Ron DeSantis Monday.

“In times like this, I think of Tammy and I’m inspired by her radical acts of love,” Chastain said. “I’m inspired by her passion. I see it as a guiding principle that leads us forward, and it connects us all in the desire that we want to be accepted for who we are, accepted for who we love, and to live a life without the fear of violence or terror.”

Beyoncé may not have finished Sunday with an Oscar, but she did win our hearts.

Decked out in a neon green dress — similar to the color of a tennis ball — the legendary singer opened the Academy Awards with a performance of her nominated song “Be Alive” from the film “King Richard,” which was nominated for Best Picture.

The live band and her dancers all wore the same tennis ball color, creating a visual feast like only Queen Bey can.

The Oscars paired two larger-than-life performers to present the last award of the night — Lady Gaga and Liza Minnelli.

The 76-year-old Oscar winner, there to commemorate the 50th anniversary of best picture nominee “Cabaret,” stumbled over her words at one point, and looked to Gaga. The pop icon gripped Minnelli’s arm and quietly told her, “I got you.” Minnelli whispered back, “I know, thank you,” and went on to announce that “CODA” had won best picture.

It was a hushed moment of support between two showbiz legends, one that felt true. Their lovely onstage partnership was a fitting end to a whirlwind ceremony.