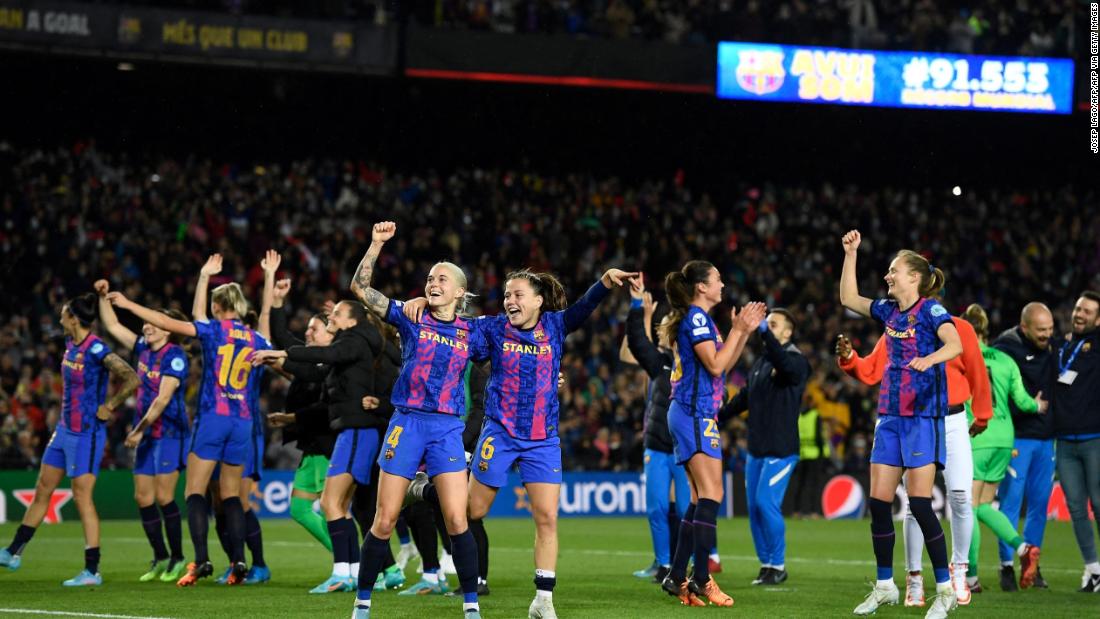 The attendance was the biggest to ever watch a women’s football match, and Barcelona certainly made the most of the home support.

Already holding a two-goal advantage from the first leg last week, the host emerged victorious again with an emphatic 5-2 win over its Madrid rival to secure a place in the semifinals.

“The fans [are] not leaving for home, they’re just staying to celebrate with us. I didn’t imagine anything like it and it’s just goosebumps all over the place,” Barca forward Caroline Graham Hansen told reporters after the game.

“They have been singing all game and it’s been amazing. It’s something I never dreamed of happening and here today we did it. Hopefully it’s not the last time we’re doing this.”

The new attendance record smashes the previous mark for a women’s club football match, which was set in 2019 when 60,739 people watched Atletico Madrid face Barcelona at its home stadium, the Metropolitano.

The attendance at Wednesday’s El Clásico also breaks the overall record for any women’s game, which was 90,195.

That was set in 1999 when the US beat China in the women’s World Cup final at the Rose Bowl in Pasadena, California.

READ: Women’s soccer settlement is a landmark win for fairness

‘You LOVE to see it’

The new record was welcomed by stars of the women’s game.

US women’s national team superstar Megan Rapinoe tweeted her appreciation, writing: “A crowd fitting for the team on the pitch! You LOVE to see it.”

Playing in front of record-breaking support, Barcelona put on a show to thrash its fiercest rival.

Trailing 2-1 early in the second half, the hosts scored three quickfire goals in 10 minutes to put the tie beyond any doubt.

With the 8-3 aggregate win, the defending European champion advances to the semifinals for the fifth time in six years.

It will face either Arsenal or Wolfsburg for a place in the final.

“I’m speechless. It’s a dream come true. I can only answer with more work, getting better and winning games so we can give them a big spectacle,” said Barcelona’s Alexia Putellas, who was one of the goalscorers on the night.

“I saw a lot of girls, children with that spark in their eyes. It’s amazing to be part of history.”