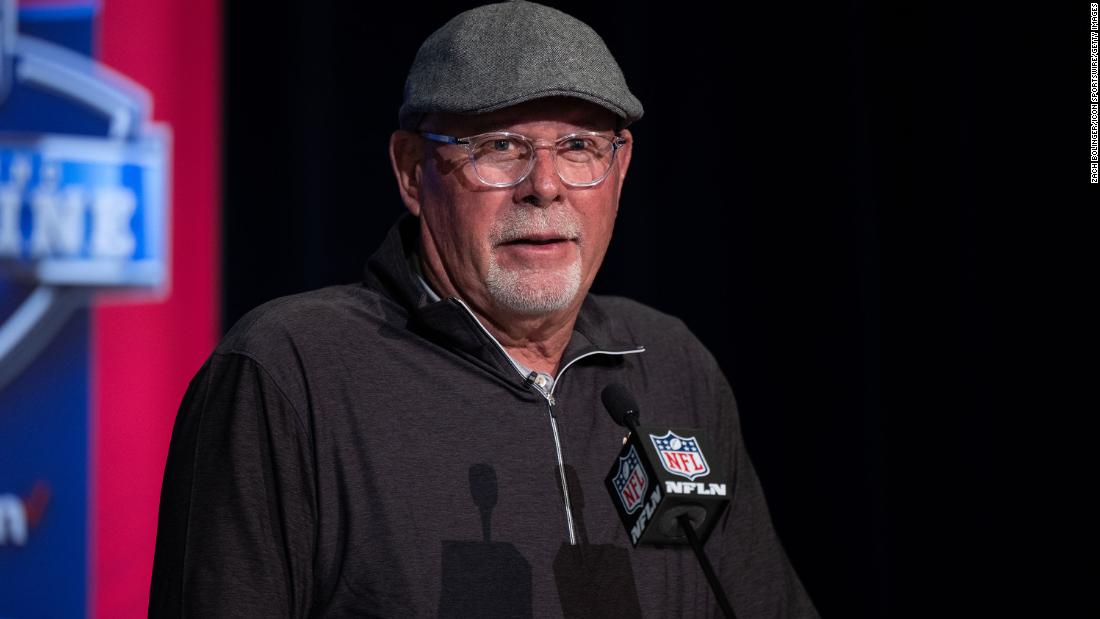 Arians — who led quarterback Tom Brady and the Buccaneers to a Super Bowl victory in February 2021 — will begin a new role as senior football consultant, the team said in a statement. Brady announced earlier this month he would return to Tampa Bay for another season after briefly retiring.

Arians said he “accomplished more than I ever dreamed I could during this incredible coaching journey” of 50 years, according to the statement. He won the 2012 AP Coach of the Year award as an interim head coach for the Indianapolis Colts, then served as head coach for the Arizona Cardinals from 2013-2017. Arians came out of retirement in 2019 to lead the Bucs.

“Winning Super Bowl LV at our home stadium, with my mom and family in attendance, was really the last item I wanted to check off my career bucket list. For me, this is about more than just trying to add more wins to my coaching record,” he said.

The 69-year-old Arians denied in his statement that his health was a motivator in stepping down.

“Before you start thinking this is about my health, don’t. This is the best I have felt in many years and I’m looking forward to helping this team continue winning through my new role.”

Defensive coordinator Todd Bowles has been named the team’s new head coach and a press conference is scheduled for Thursday afternoon, according to the Bucs. Arians praised Bowles and endorsed his elevation in his statement.

“Todd is a great football coach and I know he will do excellent things here with the Buccaneers. The coaching staff has been crucial to the success we have enjoyed here the past few seasons. Coaching is about teaching players, and this staff has some of the best teachers in the business,” he said.

Bowles will be sixth minority head coach in league

Bowles, who has head coaching experience and led the New York Jets from 2015-2018, will be the sixth minority and third Black head coach among the NFL’s 32 franchises, joining Pittsburgh’s Mike Tomlin and Houston’s Lovie Smith.

The NFL has faced heavy criticism for the lack of minority head coaches in a league where nearly 70% of the players are Black.
Brian Flores, the former head coach of the Miami Dolphins, filed a lawsuit earlier this year against the NFL and three of its teams for racial discrimination. The NFL and the three teams have denied the allegations from Flores, who is Black. The Dolphins later replaced Flores with Mike McDaniel, who is multiracial.
NFL commissioner Roger Goodell said in February the NFL had fallen short by “a long shot” in ensuring head coaching opportunities for Black and minority candidates and vowed to reevaluate league policies. The league is now requiring all teams to hire a minority or female offensive assistant coach for the 2022 season.
Under Arians, the Buccaneers in 2019 became the first NFL team to have two women as coaches on its staff. In 2015 with the Cardinals, Arians made Jen Welter the first female NFL coach in history.

CNN’s Jill Martin and David Close contributed to this report.

Share
Facebook
Twitter
Pinterest
WhatsApp
Previous articleAcademy initiates ‘disciplinary proceedings’ against Will Smith over Oscars incident
Next articleAfter an 8-year wait, the US men’s soccer team will once again compete in a World Cup