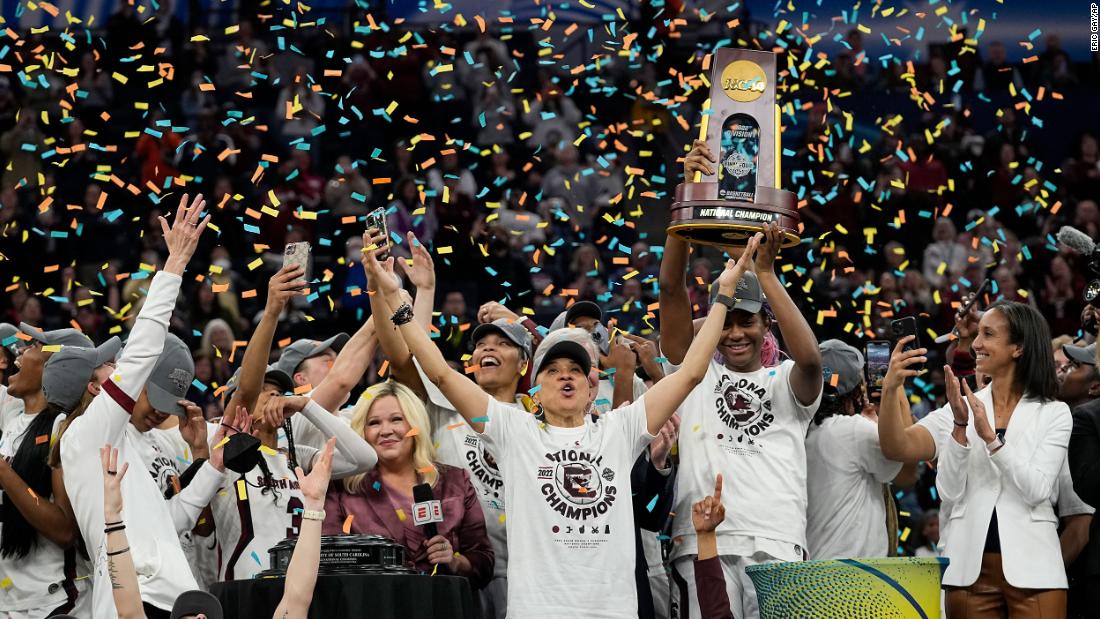 The name of the game Sunday was defense and offensive rebounds for the Gamecocks, who controlled the game from the start with a 13-2 lead in just the first six minutes of the game. It was the fewest points the Huskies had scored in a quarter this season.

The Gamecocks outrebounded the Huskies 49-24 in the win.

The Huskies went on two runs — a 9-0 run in the second quarter and a 10-0 one in the third — but the Gamecocks kept the lead the entire game.

South Carolina guard Destanni Henderson and forward Aliyah Boston were the stars of Sunday’s game. Henderson ended the game with 26 points and Boston with 11.

“I’ve been thinking about it since last season, everyone had a picture of me crying. But today we’re national champions and I’m in tears,” Boston said, referring to last year’s Final Four loss to Stanford.

The Gamecock defense held off the star trio of guards for the Huskies — Paige Bueckers, Christyn Williams and Azzi Fudd. Both Williams and Fudd did not score until late in the fourth quarter and Bueckers ended the game with 14 points.

“I know our players were exhausted, but they were determined to be champions today,” said South Carolina coach Dawn Staley.

UConn was 11-0 in national championship games before Sunday, which all came under head coach Geno Auriemma.

Sunday’s title game was a rematch. South Carolina beat UConn 73-57 in November in the Battle 4 Atlantis in the Bahamas, relying on 22 points from Boston and a stifling defense that held the Huskies to just 3 points in the fourth quarter.

UConn, the premier women’s basketball program for almost three decades, finds itself in the odd position of underdog. A 2-seed in the tournament, UConn had 11 starting lineups this season due to a mix of injuries and Covid illnesses.

Still, UConn reached the Final Four by topping 1-seed NC State in an epic 91-87 win in double-overtime, the first time in women’s NCAA tournament history a game in the Elite Eight or beyond needed double overtime. They followed that up with a 63-58 win over another 1-seed in Stanford on Friday night to reach the title game.

South Carolina has been the top-ranked team since the preseason and is 34-2 on the year, with each of its losses coming by 2 points or fewer.

The Gamecocks reached the Final Four by beating 10-seeded Creighton 80-50 and then dropping 1-seeded Louisville 72-59 on Friday to reach the title game. In the win over Louisville, Boston and her pink and purple braids scored 23 points and snagged 18 rebounds, the 29th double-double of her stellar season.

This was UConn’s 14th consecutive Final Four appearance stretching back to 2007.

South Carolina has made the Sweet 16 every year since 2014 and won its first national championship in 2017. They were the top-ranked team in the country in 2020 when the tournament was canceled due to Covid-19 and last year lost in the Final Four.

The two teams last played in the NCAA tournament in 2018, when UConn beat South Carolina 94-65 to go to the Final Four.