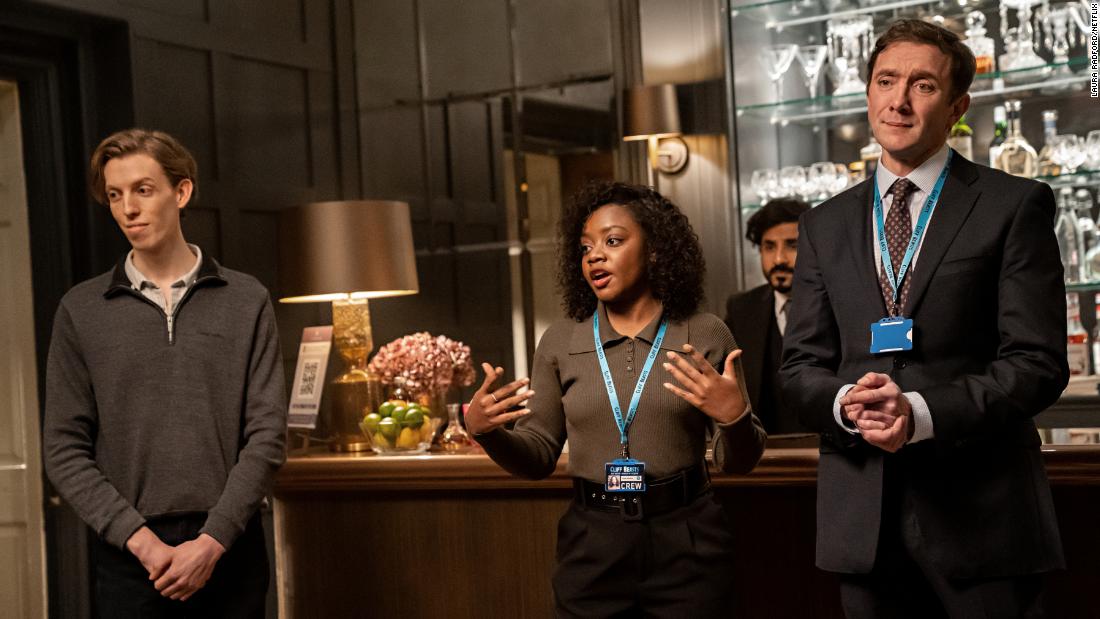 The potentially amusing conceit involves the production of the latest sequel (No. 6!) to “Cliff Beasts,” a fictitious movie franchise described as the 23rd most profitable in history. The cast must reassemble under production guidelines imposed during the height of Covid, sequestered together in a hotel when they’re not suspended by wires in front of a green screen, spouting stiff dialogue and fighting computer-generated monsters.

“The safest place in the world right now is a film set,” one of the cast members, Carol (Karen Gillan), is told by her agent when she balks at participating, having previously irked her co-stars by skipping the last sequel to do an ill-advised project about Jews and Palestinians uniting against aliens.

All the craziness that goes into producing a film gets essentially put on steroids, with the crew receiving warnings about just how strange actors can be, eccentricities heightened by isolating everyone in a confined space.

Obviously, the lack of creativity in sequel-minded Hollywood is ripe for parody, but all the coy asides would probably play better at a film-industry premiere than at home via Netflix. Those inside-baseball gags include a mention of the People’s Choice Awards, an actor convinced he can improve the script, and a studio boss (Kate McKinnon) who issues threats from afar with an insincere smile.

Still, the boredom the cast endures sitting around in isolation begins to spread to the viewer, overcoming the over-the-top efforts of Leslie Mann (Apatow’s spouse), David Duchovny, Keegan-Michael Key, Pedro Pascal, Iris Apatow — playing an influencer cast to tap into her social-media following — and many, many celebrity cameos, which manage to be both impressive in their volume and mostly gratuitous in their execution.

Sharing script credit with Pam Brady, Apatow serves up some clever lines, but they’re mostly lost in the overall noise and manic tone. While it’s not necessarily too soon for a funny Covid movie, “The Bubble” labors to achieve a sought-after level of zaniness right up until the ending.

“I am the painter, and you are the paint,” the predictably stressed-out director, played by Fred Armisen, eventually snaps at his cast.

Having recently devoted time to documentaries about comedy legends Garry Shandling and soon George Carlin, Apatow has certainly made his share of memorable comedies since “The 40-Year-Old Virgin.” “The Bubble” also overtly states its unassuming mission, which is to offer people a light distraction in these troubled times.

It’s a nice thought, but as distractions go, this one’s too much like watching paint dry.

“The Bubble” premieres April 1 on Netflix.