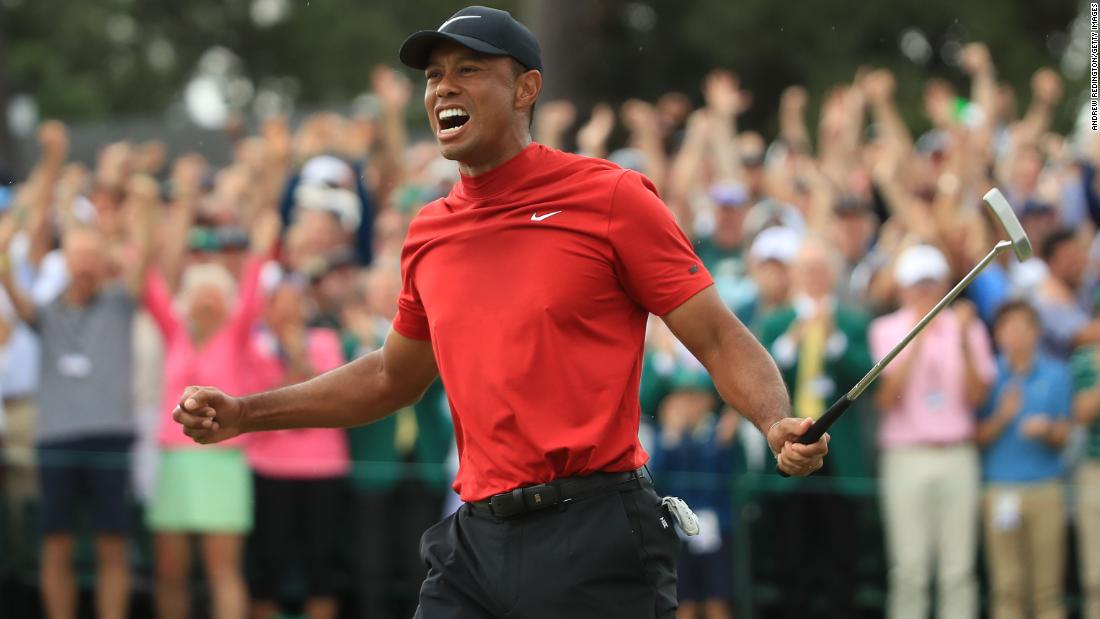 For one of golf’s greats, it’s been an uphill struggle for Woods following a car accident in February 2021 when he suffered serious leg injuries requiring surgery.
His only prior appearance on the golf course had come with his son Charlie at the PNC Championship in late 2021, but a rare sighting of Woods’ private jet landing at an airport near Augusta last week caused speculation to circulate that the 15-time major winner could be in line for a stunning return to action.
After some practice rounds, Woods has now confirmed that he would indeed be making his return to competitive golf.

And for a man and a player whose career has been defined by extraordinary highs and lows, a return to competitive golf after 16 months away is yet another landmark on a roller coaster of a career for the 46-year-old.

Fans were using flight tracking software to follow Woods’ plane’s path when it was rumored he was on his way to Augusta National.

His appearance at the course was met with a fanfare similar to that of a famous actor’s public appearance. And no wonder — his career is more akin to a Hollywood blockbuster.

From breakthrough golf sensation and winner of 14 majors in 11 years, Woods was one of the biggest names in sports, not just golf, with his face plastered across billboards and TV screens worldwide.

Then came the fall.

First, there was the statement admitting his “transgressions” and saying he had “let my family down” as Woods announced he would be taking an “indefinite” break from golf while a number of sponsors such as Gillette, Accenture and AT&T cut ties.

There was the stay at a Mississippi addiction clinic, and that press conference in February 2010.

“I was unfaithful. I had affairs. I cheated,” he told a select group of friends and family — his mother Kultida was sitting in the front row — as well as the world’s media at the PGA Tour headquarters in Florida.

Woods admitted his actions were “not acceptable,” and that he had “stopped living by the core values” he was taught by his parents.

“I knew my actions were wrong, but I convinced myself that normal rules didn’t apply,” he said

Despite attempts to patch up his marriage, divorce from Elin followed later that year. His form plummeted, he tinkered with his swing, he changed coach and caddie, climbed back to world No. 1 in 2013, before serious short game yips.

There was also a growing list of injuries, leading to four back operations including spinal fusion surgery, the “dark times” where the pain was so bad he couldn’t even get out of bed, or play with his kids, and fears for his future quality of life let alone the pursuit of a top-level golf career.

There were aborted comebacks, the line leaked from a Masters Champions Dinner where Woods admitted his career was “done,” the world ranking plunging outside the top 1,100, the arrest on a DUI charge and an addiction to painkillers used to treat his back.

A police mugshot showing a haggard and puffy-looking Woods provided graphic evidence of just how bad things had got.

Then came the comeback.

Social media clips of Woods playing in 2018 once again started a fanfare of hope about a potential return.

And he capped off one of the most remarkable comeback stories by winning his fifth Masters title at the age of 43, gripping the world in the process and writing a magical story a scriptwriter would be proud of.

“To have my kids there, it’s come full circle,” said Woods, who embraced his mother, Sam and Charlie, and girlfriend Erica Herman after walking off the final green. His father and mentor Earl died in 2006. “My dad was there in 1997 and now I’m the dad with two kids there,” added Woods.

Yet there further ups and downs to come.

At the end of the summer in 2019 he took time off for further knee surgery, but in vintage Woods fashion, he hit back with victory in Japan to equal Sam Snead’s record of 82 PGA Tour victories.

After a long road to recovery — he admitted in February this year he was “frustrated” with the speed of his rehabilitation — Woods is ready to step back onto the course, and possibly write a new chapter to his own personal movie script that just keeps on delivering.

Rob Hodgetts contributed to this report.