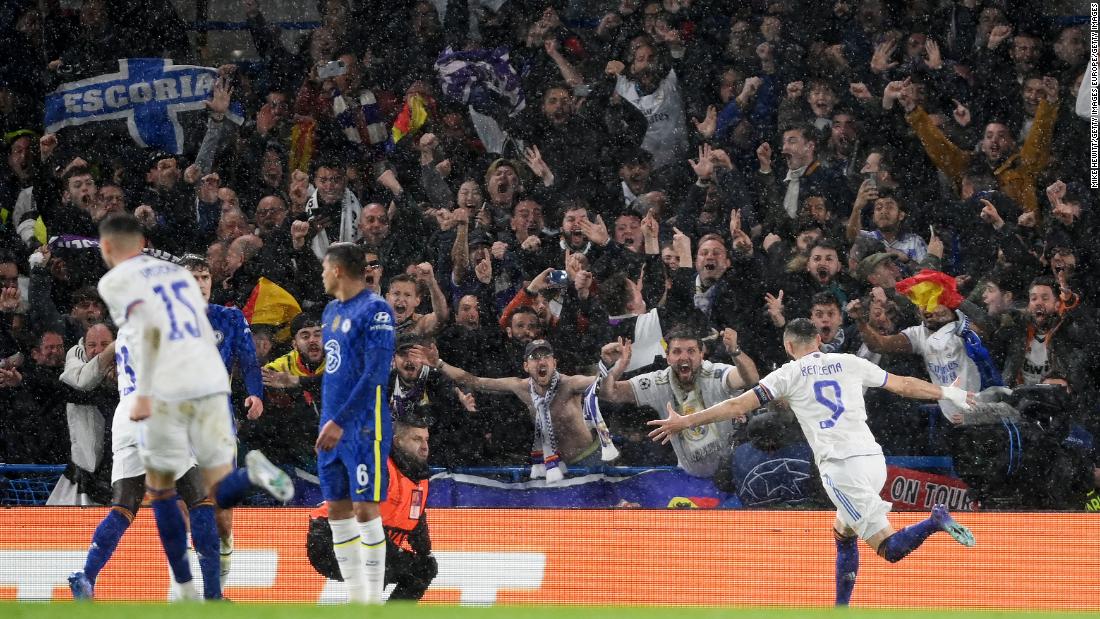 A hat trick for Karim Benzema inspired his side to a 3-1 win on a wet and windy night in west London, putting the Spanish side in firm control of the matchup ahead of the return leg.

It was a game that promised to look very different when the draw was made.

Sanctions on out-going Chelsea owner Roman Abramovich, due to his links with Russian president Vladimir Putin, looked likely to have a huge impact on what was the biggest game of the club’s season so far.

There was uncertainty whether any fans would be able to attend the game and restrictions on travel budgets brought into doubt whether Chelsea would even be able to participate in the Champions League at all.

But, after further clarifications and working with the British government, it was easy to forget about the off-field troubles as a full capacity Stamford Bridge cheered on its side.

On the pitch, it was Chelsea who started better, swarming on Madrid players who took a while to settle — but settle they did.

The visitors worked a brilliant chance for Vinicius Jr. who smashed the crossbar with his early effort and Chelsea didn’t take heed of the early warning.

The goals were greeted by frenzied celebrations in the away end with many of the Madrid fans at the mercy of the stormy conditions.

With the semifinals looking like a distant dream for Chelsea, the home support started to become frustrated but there was still a twist to come in a frantic first half.

Kai Havertz halved the deficit with a header of his own, latching onto a beautifully crafted cross from Jorginho.

But before many had taken their seats after the restart, Benzema was on target again, this time taking advantage of some sloppy play by goalkeeper Mendy.

His pass to Antonio Rudiger was poor and the defender could do little to prevent Benzema from stealing possession and passing into an open net.

It was a second consecutive hat trick for the Frenchman in this competition, coming after his heroics in the round of 16 against Paris Saint-Germain.

Despite Chelsea having more attempts and plenty of the ball in the second half, it was the Madrid fans who were dancing as the home fans became increasingly agitated.

There was enough to suggest Chelsea had a chance, albeit slim, in the second leg but who knows what the club will look like by then.

A number of potential owners have expressed interest in taking over the stewardship of the club but there is yet to be a decision on where Chelsea goes next from here.

Abramovich himself has been acting as an intermediary between Russia and Ukraine, shuttling between Moscow, Kyiv, Istanbul, Warsaw and beyond amid a whirlwind of talks aimed at ending the conflict, his spokesman confirmed earlier this year.

All this as the brutal realities of war have begun to emerge across Ukraine as Russian forces retreat from the Kyiv region and shift their focus to the country’s east.