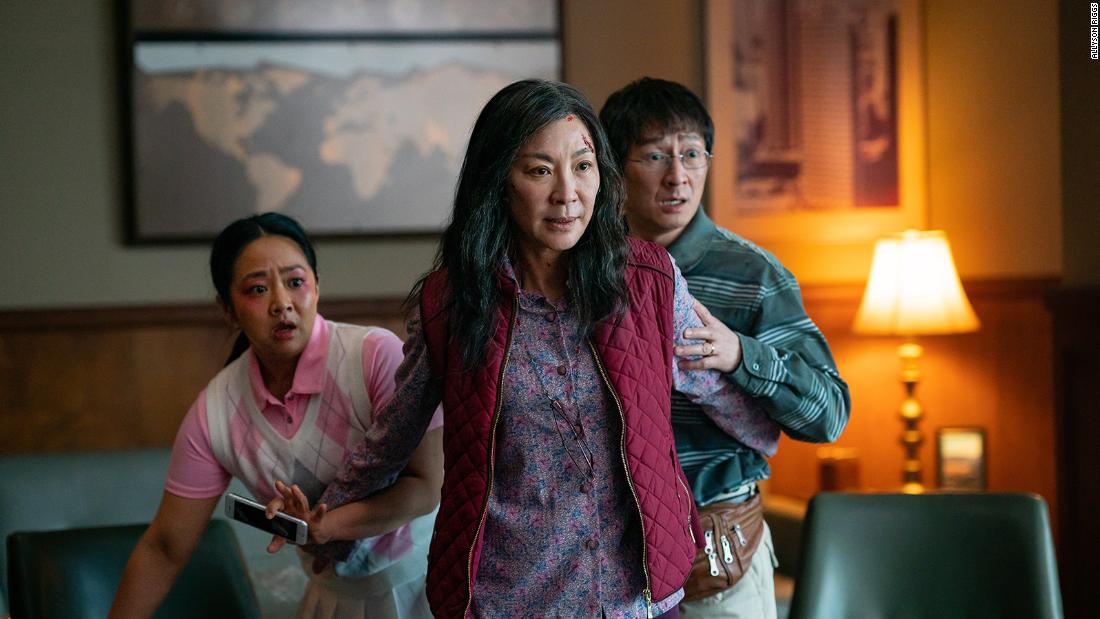 On the plus, it would be hard to spoil a movie that moves at this sort of frenetic pace, and that works from the Marvel-esque conceit that there is a multiverse of infinite possibilities, with different universes created by the different choices that we make along the way.

All this comes as jarring news to Evelyn (Michelle Yeoh), who is living a rather tedious, hectic life running a struggling laundromat, dealing with her upbeat but ineffectual husband (Ke Huy Quan, the kid from “Indiana Jones and the Temple of Doom,” now grown up and returned to acting) and a grown daughter, Joy (“The Marvelous Mrs. Maisel’s” Stephanie Hsu), who is understandably irked by mom’s reluctance to acknowledge that she’s gay.

Meeting with an IRS agent (Jamie Lee Curtis, buried under unflattering makeup), Evelyn is suddenly pulled into the multiverse, apprised that she’s the one person who can stop an “agent of chaos” that represents a threat to them all. Moreover, each time she accesses one of the other universes she acquires the skills that she developed there, which given the dangers and Yeoh’s martial-arts background, certainly comes in handy.

Directed by the team of Daniel Kwan and Daniel Scheinert (who go by Daniels), the film owes a sort-of debt to “The Matrix,” but that comparison doesn’t come remotely close to capturing the whimsical tone, which can then become thoughtful and melancholy. This isn’t the kind of movie one would necessarily seek out for a deep contemplation of roads not taken, “dreams you never followed” and achieving serenity with one’s choices, but that’s certainly one of the universes that “Everything Everywhere” occupies.

Indeed, those expecting a full-throttle action vehicle, as the trailer seems to indicate, might find themselves adjusting to the movie’s initial pacing. Once the plot does kick in, the real triumph resides in the editing, slicing and dicing together glimpses of the infinite possibilities at work, and requiring the cast to embody all of them, from the sober to the absurd.

Whether that will translate to an audience beyond hardcore cinephiles is an open question, and the limited release before a wider rollout indicates a desire to capitalize on word of mouth and let those fans do some of the marketing work on the film’s behalf. Nor does it help that the movie could excise 20-30 minutes and not lose much, certainly in the way of clarity.

Still, Daniels (working with producers that include “Avengers” duo the Russo brothers) have delivered the kind of imaginative, uncompromising effort that can get people excited about movies. While the net effect can be an almost overwhelming exercise to absorb, “Everything Everywhere” deserves to be seen some time, and somewhere.

“Everything Everywhere All at Once” premieres in wide release in US theaters on April 8. It’s rated R.