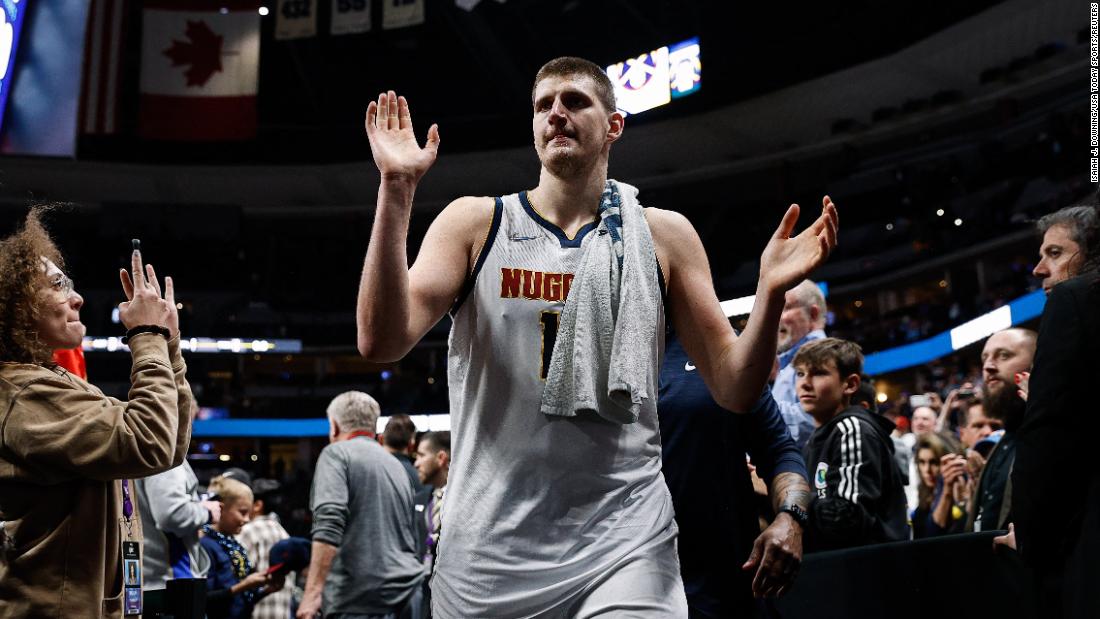 As far as good days at the office go, they don’t come much more perfect than that of the Serb — sporting a bright red headband — who led scoring with 35 points on his landmark night, adding 16 rebounds and six assists.

The reigning MVP’s headwear was donned after an accidental elbow from Grizzlies forward Jaren Jackson Jr. in the opening minute of the game, as TV images showed blood pouring from a gash on his head.

Jokic had initially returned to the court, but as blood continued to flow, he went back to the bench to be fitted with the headband.

The rest, quite literally, was history. Jokic clinched the feat with just over five minutes left, driving to the basket before spinning and looping a shot towards the basket — the ball bouncing once off the rim before dropping in and securing the Serb’s place in the NBA record books.

Cue pandemonium among the home crowd at the Ball Arena, as a subsequent time out allowed fans to serenade their history-making center.

“I just love how they [the fans] treat me, how they’re really on my side. I just love Nuggets fans … they’re always bringing the energy that we need.”

Jokic’s achievement will only strengthen calls for the four-time All Star to retain his MVP status following a monster end to the regular season.

The Serb has averaged 38 points, 17.5 rebounds and six assists per game in April, building on a 29.9ppg, 12.7rpg and 7.9apg average through March, which included a dazzling 46-point triple-double to almost single-handedly drag his team to victory over the New Orleans Pelicans.

As far as his coach Michael Malone is concerned, the defense of his title is not up for debate.

“The MVP isn’t even a competition,” Malone said in his postgame press conference.

“There’s other great players. I’m not saying they’re not great players. But what Nikola Jokic has done this year — with this team — everything we’ve had to go through, is just incredible.

“He was good last year and he’s even better this year.”

While Jokic agreed he’d gone up a notch this season, his answer was more understated.

“I think I had a great season, the whole season, even better than last year,” Jokic said.

“If that is enough, it’s enough. If it’s not, you cannot control that.”

Victory helped the Nuggets seal a top-six spot in the Western Conference playoffs, condemning the Minnesota Timberwolves to the seventh seed and the subsequent play-in tournament beginning April 12.

Victory for the Timberwolves against the eighth-seeded team in the West would see them face the Grizzlies in the playoffs, who had already locked in the No. 2 seed in the West.

Aaron Gordon followed Jokic in scoring for the Nuggets, adding 22 points, with Will Barton and Bones Hyland scoring 16 apiece.