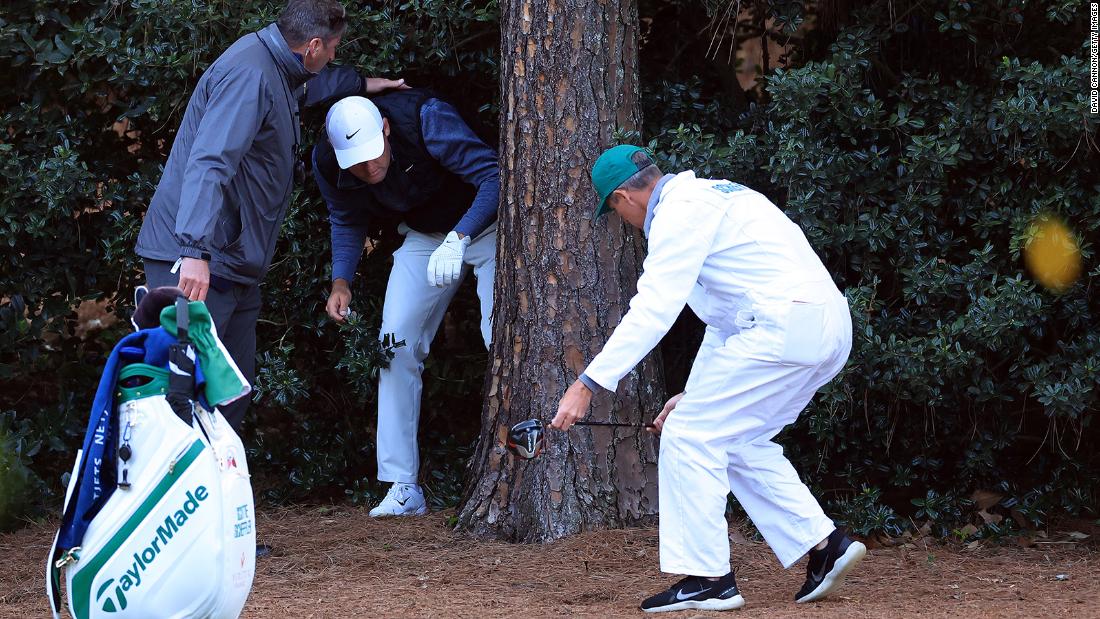 Scottie Scheffler, who looked to be heading in with a commanding lead, hit a wayward tee shot on the 18th hole, with his ball flying into the bushes to the left.

The newly crowned world No. 1 eventually found his ball, which ended up deep in the foliage, and was forced to take a drop just to be able to play his next shot.

He was able to produce an extraordinary shot to get his ball near the green but the penalty meant he finished with a bogey on the final hole, eventually carding a one-under par 71 on Saturday.

It means the US golfer has a three-shot advantage over second-placed Cameron Smith who surged up the leaderboard with his own excellent round of 68.

With just 18 holes left at Augusta National, Scheffler has a chance to win his first major and continue his excellent run of form.

Scheffler is the hottest man in golf.

Last month, he was named the world No. 1 after a magnificent stretch in which he won three PGA Tour events in five starts.

So coming into the 2022 Masters, a tournament at which his best finish came last year when he finished tied for 18th, the 25-year-old was one of gallery’s favorites.

And he rewarded those beliefs, earning himself a five-shot lead after 36 holes.

Despite holding the Masters lead, the pressure never seemed to daunt Scheffler, as he laughed and joked with caddie Ted Scott during his third round on Saturday.

He oozed calmness as he quickly added to his overnight eight-under score, jumped to 10-under on the third hole.

A brief blip on the fourth hole meant he dropped back to nine-under but a blistering stretch of golf — in which he displayed all his qualities — helped reassert his lead as he went to 11-under.

All the while, Smith was making his move. The Australian player started the day on two-under, but vastly improved after a disappointing Friday as he showed glimpses of his best around the famous course.

The 28-year-old finished six-under — carding the only score under 70 on the day — to move into second position with Scheffler still out on the course, and thrust himself in the running for the green jacket.

However, just when it seemed like everything was lining up for a big Scheffler lead heading into the final day, some small cracks began to appear in his typically steadfast game.

Consecutive bogeys on the 14th and 15th holes cut his lead down to just three, with two holes remaining.

He recovered in magnificent fashion just a hole later, claiming a vital birdie on the penultimate hole to once again stretch his lead to four.

Just when it looked like he was running away with it thought, his wayward drive on the final hole made things more enticing.

While he could’ve lost his head and been flustered, he remained calm and collected to salvage a bogey and maintain his lead.

With just 18 holes left to go to decide the winner of golf’s most prestigious major, Scheffler remains in pole position to claim his debut Masters title.