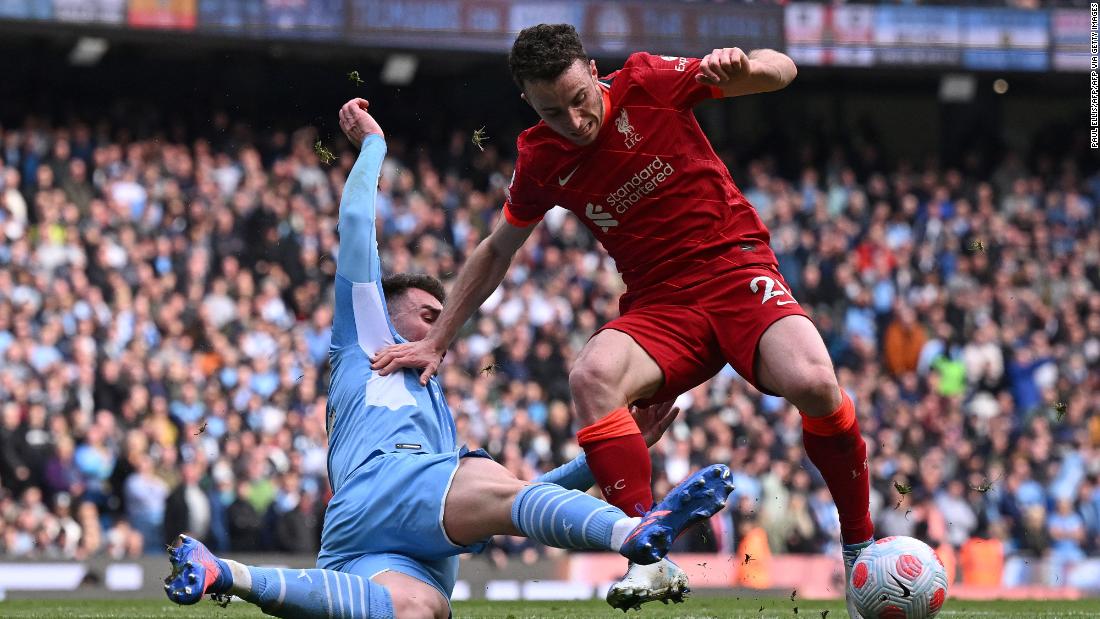 City took the lead in the first five minutes when Kevin De Bruyne’s deflected shot flew past a despairing Alisson in goal.

But Liverpool bit back soon after, with Diogo Jota tapping home from close range.

And in an pulsating first-half, Gabriel Jesus tapped Manchester City back into the lead only for Sadio Mane to equalize 47 seconds after half-time.

The draw means City have a one-point lead over Liverpool at the top of the Premier League with just seven games remaining of the season.

From the first whistle, it was an enthralling battle at the Etihad Stadium.

Two of the most entertaining teams in Europe are both in excellent form and coached by two of the best managers in the world.

With a powder keg of an atmosphere, it seemed both teams fed off that energy — with each preferring attack over defense.

And Manchester City landed the first punch of the afternoon, Belgium midfielder De Bruyne’s strike from the edge of the area deflecting into the Liverpool goal to the delight of the home fans.

Just when City were looking to build a head of steam, Liverpool hit straight back, Jota tapping home after a delicate pass from Trent Alexander-Arnold.

But, showing its champion pedigree, City once again struck back with Jesus — who had not scored since September — justifying his selection as he tapped home from Joao Cancelo’s well-timed cross.

With his side trailing, Liverpool manager Jurgen Klopp might’ve had some stern words for his players at half-time.

And with his words ringing in their ears, his players scored almost immediately after the break, with Mane finishing coolly after a brilliant pass from Mohamed Salah.

Former Liverpool player Raheem Sterling thought he had given City the lead when he poked his effort under Alisson, only for the video assistant referee to rule it out for offside.

The final 20 minutes were high in energy but with chances at goal few and far between, with Riyad Mahrez’s late free-kick clipping the post.

The draw means that the two sides remain locked just a point apart with seven games remaining of the 2022 season.

Both teams have four home and three away games remaining, with the Premier League title race looking like it will go right down to the wire.