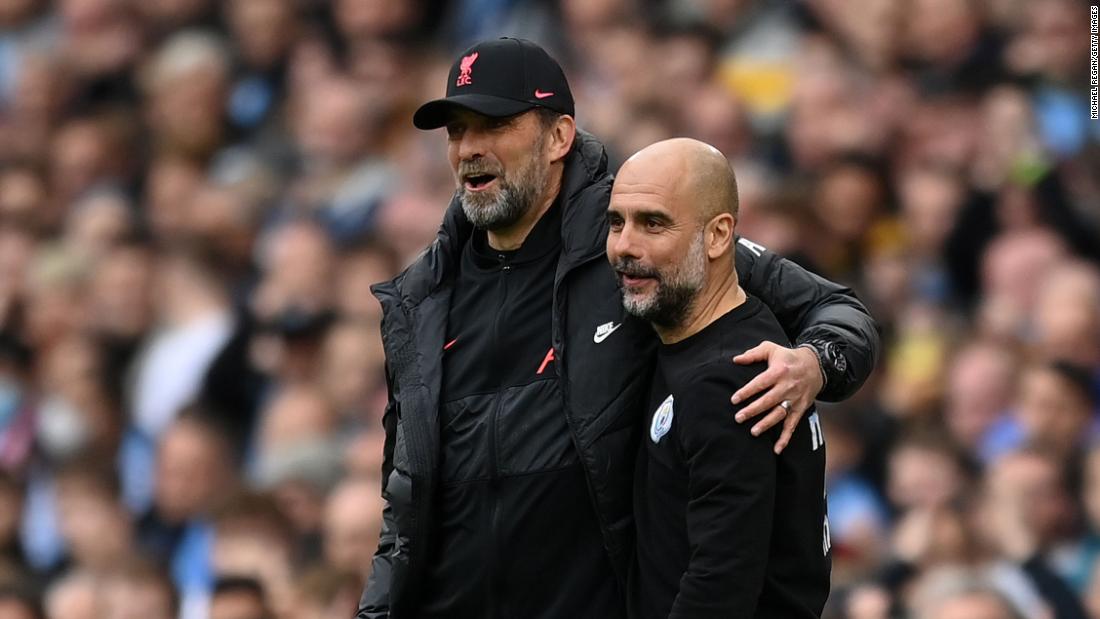 This is, in large part, due to the numerous complex historical, sometimes political, reasons that shape decades-long feuds between two opposing sets of supporters.

But prior to the past four seasons, it’s unlikely either set of supporters would have had a bad word to say about the other.

The current iterations of these two sides are likely the most talented this league has ever seen, but a clash of talent alone does not make a great rivalry.

This matchup has no doubt earned the label of English football’s new ‘Clasico’ bestowed on it by some sections of the media, though it certainly lacks the punch of its Spanish namesake.

Even Manchester City manager Pep Guardiola and Liverpool counterpart Jurgen Klopp, two intense characters that are widely considered two of the greatest tactical masterminds of their generation, did their best to avoid creating any animosity at all in the build, with both men exceedingly complimentary about each other.

Klopp called his counterpart “the best coach in the world” and Guardiola returned the favor by insisting the German “makes world football a better place to live.”

Guardiola even went as far as saying he believes this Liverpool team is “the toughest opponent I have faced in my 13 years as a manager.”

Compare this to Premier League managerial rivalries of old, where the mind games of Alex Ferguson and Arsene Wenger would dominate headlines for weeks in the lead up to the often epic clashes between Manchester United and Arsenal.

The rivalry reached a peak in 2004 when United ended Arsenal’s 49-game unbeaten streak with a 2-0 win at Old Trafford.

After the match both coaches and players exchanged words before a slice of pizza was flung into Ferguson’s face — the incident has been referred to as ‘Pizzagate’ or the ‘Battle of the Buffet.’

Previously there was even a physical altercations on the sidelines: see Wenger and Jose Mourinho in 2014.

But if there was a bromance blossoming on the touchline at the Etihad Stadium on Sunday, the players on the pitch certainly hadn’t received the memo during a gripping 2-2 draw in a game where Liverpool twice came from behind after Kevin de Bruyne gave City an early lead and Gabriel Jesus put the home side 2-1 up.

Liverpool’s players in particular seemed intent on riling up their opposition and making this affair as fiery as possible.

Referee Anthony Taylor certainly played his part in stoking the increasingly frenzied atmosphere, as he let a number of fouls go unpunished.

Notably, Fabinho was perhaps lucky to stay on the pitch after planting his studs onto Bernardo Silva’s ankle while lunging for the ball.

The stewards certainly had their hands full, too, ushering out a number of Liverpool fans who had appeared in the home end after Diogo Jota and Sadio Mane provided the visitors’ equalizers.

On one occasion, two stewards had to fend off the advances of one City fan that aimed a wild haymaker at the Liverpool supporters being escorted away.

On the pitch, the quality on display remained almost impossibly high throughout, as Klopp and Guardiola constantly flitted around their technical areas, shouting instructions into their players’ ears anytime one of them was within earshot.

De Bruyne in particular was a phenomenon. If Karim Benzema staked his claim to being the world’s best footballer against Chelsea in the recent Champions League quarterfinal, Sunday’s game allowed the Belgian to stake his own claim for that title.

Not only was De Bruyne the orchestra for everything good that City produced, he was also the engine of the team. Even as the clock ticked deeper into injury time, the Belgian international was always the first City player hunting down the ball when Liverpool had possession.

It’s hard to say which team will leave Sunday’s game the happier with the 2-2 draw. City was probably superior overall so will feel frustrated not to have earned the win, but still walks away with its point lead at the top of the table intact.

Liverpool, meanwhile, will know it was outplayed in the first hal and will be relieved to have salvaged a draw, and need a slip up from City if Klopp’s side is to have any chance of clinching the league title.

A thrilling draw was a just result for two teams that have not only been almost inseparable this season, but over the last four. In its previous 145 matches, City has amassed 339 points, just one more than Liverpool in that same period.

The managers unsurprisingly ended the game in amicable fashion, exchanging a meaty high five and a bear hug.

Despite neither set of players giving an inch on the pitch, it remained cordial once the full-time whistle had blown.

The Brazilians on both sides — Roberto Firmino, Fabinho and Alisson with Liverpool and Jesus and Ederson with City — exchanged pleasantries in the center circle, as De Bruyne seemingly received plaudits from a number of players in red.

In the post-match media conference, Guardiola was asked by The Athletic whether he set his team up to play more like Liverpool.

“Yes,” was his response. “I always try to imitate the best teams.”

Okay, Pep, we get it. You like each other.