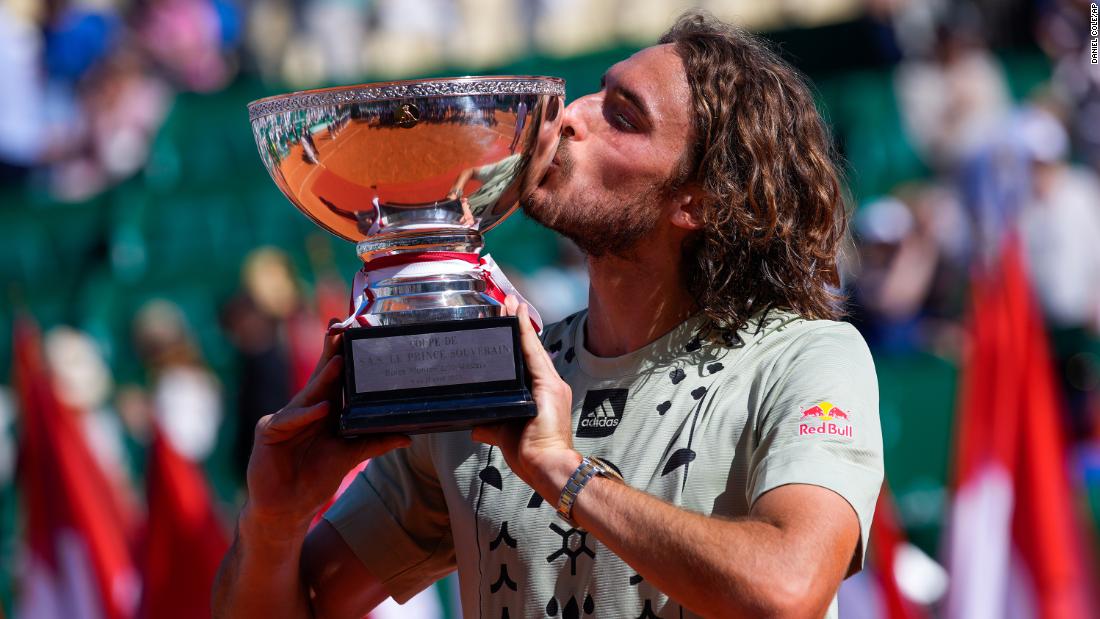 The Greek world No. 5 triumphed 6-3 7-6(3) to claim his second ATP Masters 1000 crown despite a valiant performance from the Spaniard, ranked 41 places lower.

In doing so, Tsitsipas joins an esteemed group of five players to have defended the Monte-Carlo title: Rafael Nadal, Juan Carlos Ferrero, Thomas Muster, Björn Borg and Ilie Năstase.
Seeded third heading into the tournament, the 23-year-old saw off rival and second seed Alexander Zverev on Saturday to reach the final.

His eighth career singles title, Tsitsipas will hope to use victory in his favorite stomping ground as a springboard to leapfrog the German’s world No. 3 ranking.

Having played to empty seats last year as a result of the pandemic, Tsitsipas relished the opportunity to win in front of fans at the first event he ever attended as a six-year-old.

“This has been an incredible event,” Tsitsipas said on court as he was presented with the trophy.

“I had the chance to win it last year without a crowd and I can say, for this one, I don’t think I have experienced a more special event so far in my career.

“This place holds a special event in my heart.”

The deal was sweetened by the presence of a Greek contingent in the stands, who Tsitsipas singled out in his acceptance speech.

“I would like to thank my compatriots that came to support me with their Greek flags, it slightly make it feel a bit more like home, just a little bit, so thank you for that,” he added.

Gracious in victory… and defeat

The Greek was also full of praise for his Spanish opponent, with Davidovich Fokina falling narrowly short after enjoying a stellar week in Monaco.

Ranked 46th in the world and unseeded for the tournament, the 22-year-old took the biggest possible scalp in defeating world No. 1 Novak Djokovic during the round-of-32, triumphing 6-3 6-7(5) 6-1.

Another eye-catching victory over American Taylor Fritz followed in the quarterfinal, and Tsitsipas lavished compliments on the Spaniard after the match.

“You’re someone that is making me better, I hope I’m the same,” Tsitsipas told Davidovich Fokina on court. “I would like to congratulate you on your hard work.

“Congrats to Stefanos, he played better than me today,” Davidovich Fokina said.

“He has a great team and he’s doing very good. Soon, the revenge. We will see together many times for sure a lot of battles, I hope.

“When I was a kid, I was watching on TV all the finals, and I was thinking to come play one day here in the final and I make it and I hope to be next year here.”