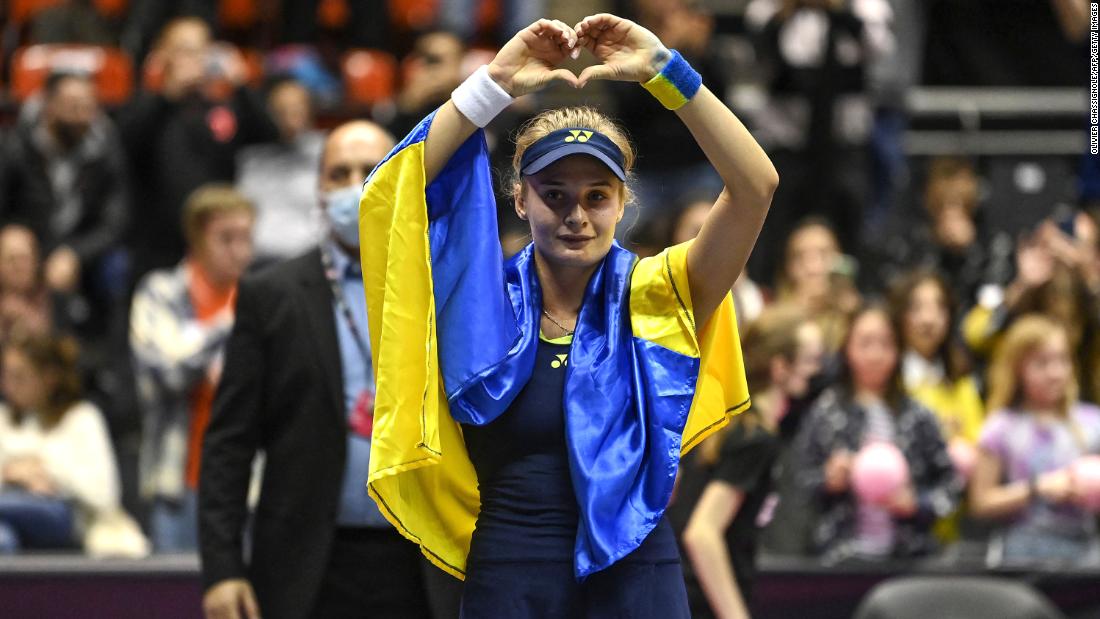 In Asheville, North Carolina, the Ukrainian women’s tennis team is in the midst of their match against Team USA for the Billie Jean King Cup qualifiers. Meanwhile, bombs rain down on their hometowns as war rages on in Ukraine.

“I feel like we have two different realities right now. The tennis court, an amazing atmosphere, amazing arena here. And then on the other side, we have people dying every day,” Katarina Zavatska told CNN Sport.

Despite a valiant recovery from 2-0 down, a stunning fightback ultimately fell just short as Team USA edged Ukraine in the deciding doubles game to take the tie 3-2 on Saturday.

Yastremska, ranked 93rd in the world, had beaten world No.14 Jessica Pegula before Zavatska pulled off an even bigger upset to defeat Shelby Rogers, ranked 155 places above her to draw Ukraine level at 2-2.

However, a 7-6(5) 6-3 doubles victory for Pegula and Asia Muhammad over Kichenok and Yastremska saw the US progress to the finals in November.

Less than three months ago, both Kichenok and Yastremska were far from the tennis court, fleeing the Russian invasion of Ukraine.

On February 25, Kichenok left Ukraine with her parents. She drove for 31 hours straight from Kyiv to Chisinau, Moldova — a 500-mile trip.

“Honestly, I’ve never experienced such a fear in my life. My body was shaking for two hours. I couldn’t talk. Like, it was really shocking. And yeah, a couple days I couldn’t eat anything,” Kichenok said to CNN. “Those days were like the most difficult in my life, I can say for sure.”

Lyudmyla’s sister, Nadiia, had left Ukraine early to prepare for Indian Wells Open and found out about the war on the news.

“I knew my sister’s there in Kyiv, my mother is there in Kyiv, my dad is in Kyiv. And it was just — until they arrived to Moldova — just two days of hell,” Nadiia told CNN Sport. “I mean, I’ve never experienced anything like that. This fear is just hard to express. It was pulling me apart. I had constant panic attacks.”

Yastremska crossed the Danube River into Romania from Izmail with her younger sister the same day the Kichenoks left Kyiv. But unlike Lyudmyla, the Yastremska sisters had to leave their parents behind.

“That day I’m going to remember for all my life when I was leaving, especially when we crossed the border,” Yastremska told CNN. “You see your parents on the other side of the river and you just didn’t realize till the end how this happened, how these things can happen in 2022.”

Playing tennis and being at war

At first, it was hard for Lyudmyla to play tennis. When she arrived at Indian Wells in California, she struggled to reconcile the peace she saw on the court with the war being waged on her home.

“My first day on site, that tennis center was shocking. I was shocked how people can still laugh. They were laughing, just living a normal life,” Lyudmyla said. “I didn’t understand how is it possible because my mind was still there.”

Yastremska has also struggled with maintaining her focus on the tennis court. Over time, playing has gotten easier, but most of her thoughts are still with Ukraine.

“Well, I’m not going to lie even to myself. It’s very hard. I’m trying to pretend like I’m pretty strong and I can play and stuff, but it’s not true. It’s very hard,” she explained.

Savchuk describes it as a “parallel life.” When she looks around her, she sees people living normally but her heart remains in Ukraine where war rages on.

Nadiia though has found some solace on the court. Playing tennis forces her to put her phone down for a couple of hours and distract herself from the constant news of war in Ukraine.

Like Nadiia, Zavatska has also derived some comfort from tennis. She’s grateful for the opportunity to play tennis, considering the dire situation in her home country.

Finding support on the court

The players are doing everything they can on and off the court to support their families and friends back in Ukraine. Zavatska uses the money she earns playing tennis to support her family because, right now, no one else has a job.

“It’s a lot of things. You have to, you have to pay the bills, you have to think about others, you have to help others,” she explained. “It’s not a pressure, but it’s something where I feel like I can do and what I’m doing every day.”

Yastremska donated all her prize money from her run in the Lyon Open to relief efforts in Ukraine and has been using her own charitable foundation for humanitarian aid. While Yastremska wants to go home and see her parents, she knows she can be more helpful by using her platform as a tennis player.

But the Ukrainian players are certainly not alone in their endeavors. Team USA showed their support for their opponents with a dinner on Thursday ahead of their first matches. At the dinner, Team USA gifted each member of the Ukrainian squad a blanket decorated with both the US and Ukrainian flags and the message: “We stand with you.”

A month ahead of the match on March 18, the USTA announced that 10% of the ticket revenue from the event would be donated to the Ukraine Crisis Relief Fund by Global Giving and that local sponsors of the event would also make donations.

On April 7, the USTA also announced that Billie Jean King would attend the match along with her partner Ilana Kloss. King and Kloss have also made a $50,000 donation to the Ukraine Crisis Relief Fund.

When the war broke out, both Nadiia and Zavatska were surprised and amazed by the power and unity they saw in their country and their people.

The entire Ukrainian team is empowered by the strength they see in their home country and that’s the one thing they want the world to know about the nation: its strength.

“I thought I always had a fear, but comparing to those people [back in Ukraine], they don’t have a fear. They go just for everything. They’re ready for everything,” said Yastremska.