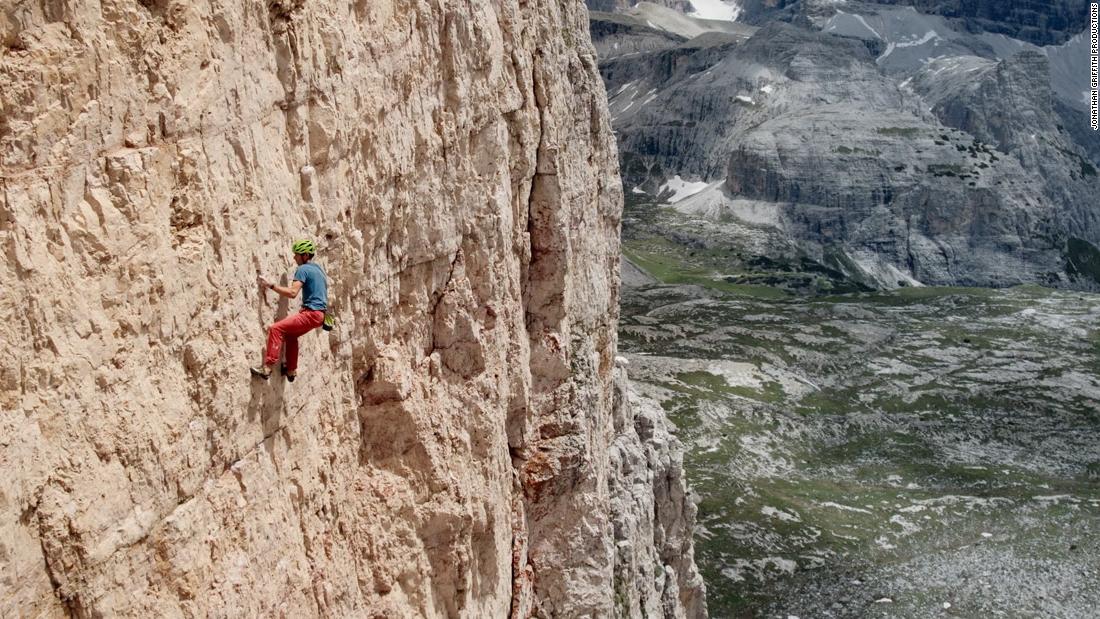 Honnold is the star of a new two-part virtual reality (VR) series which follows him as he demonstrates his skills on unforgiving mountains in the Dolomites, Italy, and in his familiar stomping ground of the US.

Audiences, who require a Meta headset to watch the series, get to see Honnold shimmy up rock faces using just his hands and feet. Look down, and viewers get a very real sense of just how far he is off the ground.

“I’d never done anything in VR, so it seemed like an opportunity to do something new and interesting,” Honnold told CNN Sport, speaking about the making of the ‘Alex Honnold: The Soloist VR.’

Honnold was joined on the adventure by a number climbers, as well as series producer Jonathan Griffith.

Griffith had already demonstrated the art of VR in a stunning project focused on Mount Everest, but the opportunity to work with the world-renowned Honnold was an exciting prospect.

Griffith had worked with plenty of professional climbers but was impressed with how methodical Honnold was, which helped the producer feel more comfortable filming the sometimes death defying routes.

On occasion, Honnold is hanging on to the rock face with one hand, at other times he’s seen hanging upside down with nothing between him and the ground.

While viewers can enjoy watching stunning sunsets and the beautiful orange light they throw across towering mountains, the series also shows Honnold climbing in the mist and cloud.

At one point, viewers are seemingly standing in the clouds as mist rolls in with Honnold climbing in an almost dream-like setting.

The show allows for a new appreciation of the strength, flexibility and mental fortitude which has made Honnold such a name.

“They’re very thoughtful human beings,” Griffith told CNN Sport when asked what it was like working with free soloists — those who climb without ropes.

“And when they go and solo something, they don’t just turn up and go crazy on it. There’s an awful lot of planning and training and everything else that’s gone in before they even set foot on the solo.

“So when you watch people like Alex solo, he’s always in control. He’s never panicking and terrified. I mean, that really would be terrifying to watch. But he’s so calm on the rock when he’s soloing.

“He just exudes confidence and chill when he’s soloing, so you never panic.”

‘Sharing with my family is the most important thing’

Griffith had his work cut out trying to capture Honnold and world-class alpinist Nicolas Hojac — who helped guide the team through the Dolomites.

The equipment needed to shoot in virtual reality isn’t light and was hauled up and down the rock faces wherever they went. The crew would then hide behind corners or rocks so viewers are left with an unspoilt view of Honnold climbing in these astonishing settings.

The camera itself, which weighs around 5.5 kilos, is actually made up of eight different cameras, allowing Griffith to shoot in 3D.

Then comes the rigging system which aims to get the camera as far away from the rock face as possible while still keeping the very expensive equipment safe and secure.

Griffith said it took the team over a year to mastermind the complex rigging system which can be set up while hanging off the side of a mountain.

But the outcome, Honnold says, was worth the extra effort.

“I’m not normally that impressed by soloing footage because, in general, the memory of the experience of something is more powerful than watching it on film,” he says.

“But the VR experience is pretty close.

“Sharing with my family is the most important thing, having people close to me actually understand what we’re doing and where we are and what it feels like.

Given his standing, Honnold is asked to feature in numerous projects around the world but, it seems, working in VR with Griffith has captured his imagination.

The pair both seem excited about collaborating again and Honnold, named as a producer in the series, has ideas about what could come next.

“I’ve already floated some ideas to Jonathan,” he laughed.

“I’m very proud of the final result. I think it’s great. You know, honestly, if anybody would have us, I would happily do it again.

“The whole experience was great and I got to do a month of great climbing. I’m very, very pleased with the whole thing and I would happily do more of it.”

Griffith, who spent hours painstakingly going through the footage in post-production, said he’d also be keen after taking a break from such an intense and time consuming project.

“I feel like it’d be really hard now to better it because my brain is just like tons of sponge cake after that project,” Griffith said.

“But I know, in about two months’ time, I’ll look back on it and I’ll think ‘we should have done that better and that could have been better’ and I’ll get totally psyched to do another one.”