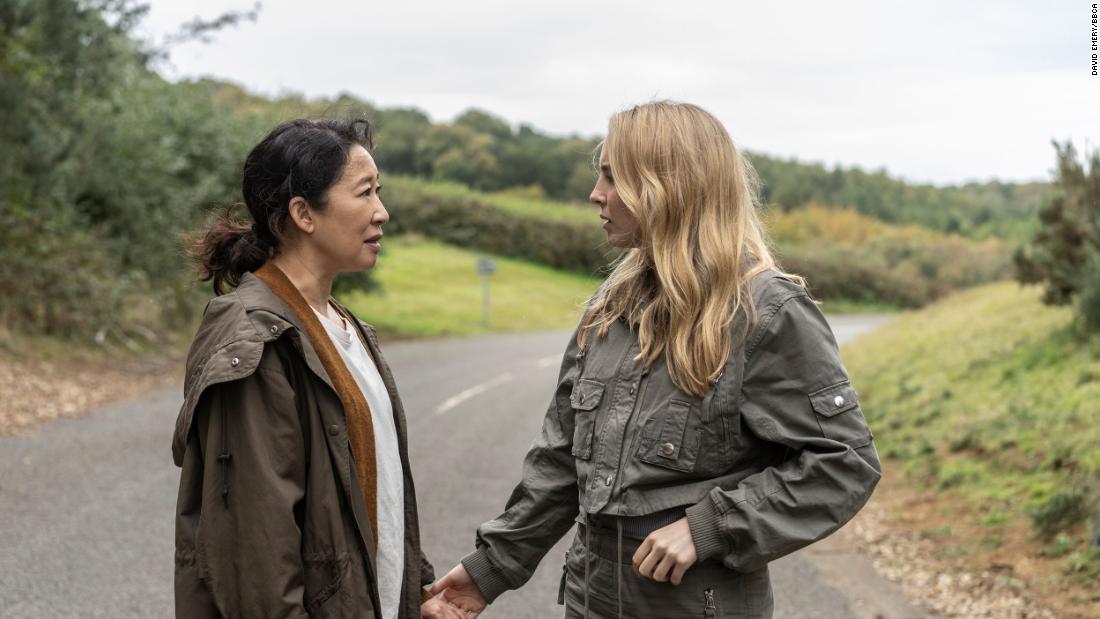 On the surface, it wasn’t a wholly inappropriate conclusion for a gory British spy thriller known for its violent delights. But for viewers all-too-familiar with the pain of watching a queer character meet a tragic end — a trope referred to as “Burying/Bury Your Gays” — it felt like a shot to the back.

Not every gay death is an example of this trope. But given recent strides for representation and inclusion in entertainment and mounting existential threats to LGBTQ+ people in real life, it feels especially old fashioned. It feels especially dangerous.

Jodie Comer, who played charming psychopath Villanelle, defended the end of “Killing Eve” by calling it “inevitable.” Sandra Oh, who played Eve, said it was “true to the show.” (Though, notably, not true to the book series that inspired the series, in which the pair end up together, alive).
While few expected a perfect ending, many saw Villanelle’s death as another sordid entry in the “Bury Your Gays” trope because, like other television and film moments counted among the offenders, an LGBTQ+ character was killed off in dubious narrative fashion, and in a way that uncomfortably centered on her sexuality.

There is a difference between a typical death and one that adheres to harmful “Bury Your Gays” narratives. While there are no hard rules, but the themes are easy to pick out.

In the most infamous examples, the fated characters tend to be fan favorites. They tend to have a following, in part because of the relatability of their queerness or queer-coding (a term for when a character isn’t openly queer but is presented in a way that sends signals to queer viewers). They tend to be part of a couple, a “ship,” in fan terms (short for “relationship”), that people emotionally invest in and root for. And, like in “Killing Eve,” it is not uncommon for their demise to happen shortly after a big, queer romantic revelation.

In 2016, viewers were so angry after a queer main character was killed off the CW’s “The 100” — she was shot and killed moments after consummating her love with another woman — the show’s creator and other TV writers publicly pledged to create more fulfilling stories for LGBTQ+ characters as a form of damage control.
In 2020, a long-simmering bromance boiled over in the final season of the massive CW hit “Supernatural” when an angel named Castiel finally confessed his love for Dean, one of the heterosexual brothers at the center of the tale, and then was immediately sucked into “Super Hell,” as some viewers eloquently put it.

The feelings of betrayal would be easy for creators to disregard with a simple, “You can’t please everyone,” if not for the parable buriedin the subtext: Love — queer love — must be immediately punished by suffering.

“What’s damaging about this is not necessarily the isolated incidents, but rather how many there are,” Raina Deerwater, the entertainment research & analysis manager for GLAAD, tells CNN. “Whether it’s intentional or not, more recent moments recall a deeply homophobic history and relay the idea that queerness is punishable.”

These deadly patterns were once the legal norm in entertainment.

In the 1930s, efforts by the Supreme Court, local governments and conservative censorship groups led film industry leaders to establish the Motion Picture Production Code, or the Hays Code. The Hays Code effectively forbade depictions of homosexuality, which was considered a form sexual deviancy.

There were some exceptions. The code mandated that “the sympathy of the audience shall never be thrown to the side of crime, wrongdoing, evil, or sin.” So, characters could be gay, but only if they were portrayed negatively and received some sort of punishment.

For two decades, bound by these rules, gay characters on screen were evil, conniving, and ultimately doomed. Even when the code was relaxed in the 1950s, queer characters were still largely tragic figures, often succumbing to suicide or mental illness. (The American Psychiatric Association deemed homosexuality to be a mental illness until 1973, and homosexual acts weren’t decriminalized on a federal level until 2003.)
Characters of color have historically been condemned to similarly tragic fates; disproportionately hemmed into narratives that revolve around suffering or subjugation.

In fiction, then, to be queer and otherwise marginalized is to suffer on multiple fronts.

Queer characters are already rare in popular media. Queer characters who are also people of color, or some other underrepresented identity — fat, disabled, neurodivergent, trans — are few and far between.

The solution, Deerwater argues, isn’t to cocoon queer characters in bubble wrap or limit their stories to rainbows and sunshine. Complex stories that end somewhere on the vast spectrum between perfect happiness and tragedy are part of reality, too.

A number of newer shows, many geared toward a young adult audience, show a fresher side of queer storytelling. The CW’s “Batwoman,” Showtime’s “Yellowjackets,” Netflix’s “She-Ra: Princesses of Power” and HBO Max’s “Our Flag Means Death” all depict queer romances in ways that feel satisfying and uncontrived. The characters pine, they fight, they get together, they fall apart. In the long run, their queerness may be one of the most unremarkable things about them.

GLAAD’s 2022 media survey reveals about 12% of regular characters on scripted TV series are LGBTQ — a record high. From that pinnacle, it’s easier to see the next summits rising up ahead: More trans representation, say, or more queer people of color. More disability representation, more shows with a variety of queer characters rather than one or two isolated tokens.
The climb toward better representation is not an easy one. At a time when record numbers of anti-LGTBQ+ bills threaten to drag back hard-won social progress across the US, harmful old media tropes are an unnecessary weight.

Fiction can shape the future, and every time a popular queer character is eliminated in a way that feels inexorably tied to their queerness (even if they are a murderous psychopath), it echoes the dangerous promises of systemic prejudice and oppression.

If the people who create our fiction can’t imagine a world beyond that, then what chance does reality have?