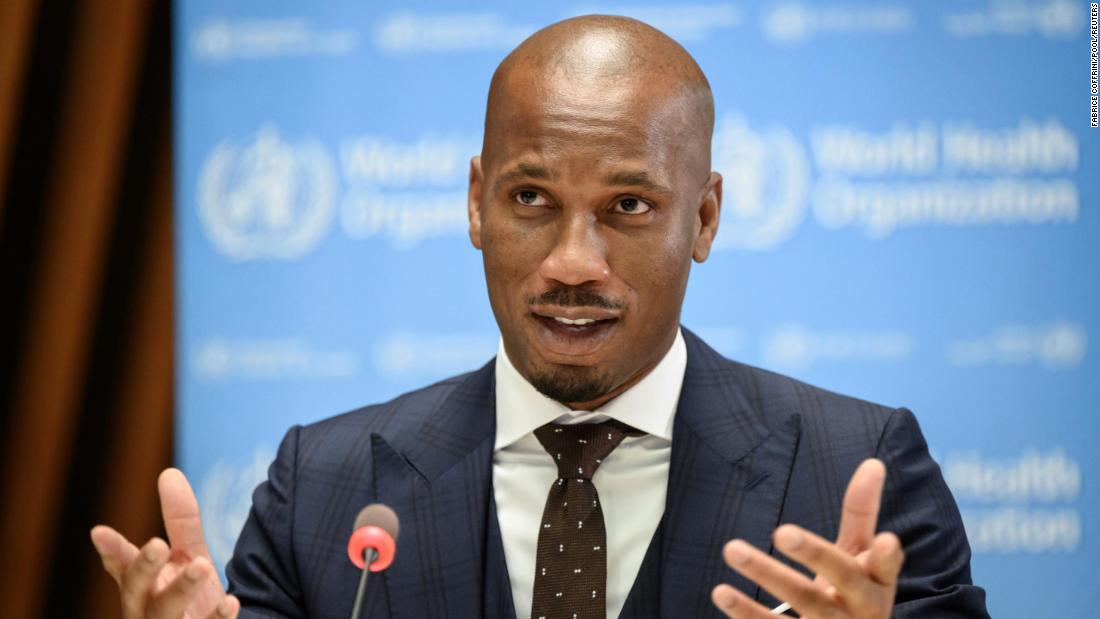 In March, Chelsea owner and Russian oligarch Roman Abramovich announced he planned to sell the club in the best interests of “the fans, the employees, as well as the Club’s sponsors and partners.”

Abramovich’s decision to sell the club came after he declared he gave “stewardship” of Chelsea to trustees of the club’s charitable foundation.

Afterward, the European Union placed Abramovich on its list of sanctioned individuals, while the UK government sanctioned him as part of its efforts to “isolate” Russian President Vladimir Putin following Russia’s invasion of Ukraine.

Abramovich has always denied being linked to Putin and rejected claims that any of his activities merited government sanctions.

Three final bids are under consideration to take ownership of the club, and Drogba — who scored over 100 Premier League goals for Chelsea — wants the new owners to prioritize matching the fans’ high level of expectations on the pitch.

“I think for the new people coming in, I don’t know what lessons to give them, but as an ex-player of the club, as a Chelsea fan, we just want them to carry on the vision and the passion of the fans because the fans are, they’re still here and also the people who have been working at the club, have done a great job,” Drogba told CNN Sport’s Amanda Davies.

Drogba became a fan favorite at Chelsea for being the talismanic striker in Jose Mourinho’s transformative first spell at the club.

After signing in 2004, he scored numerous key goals for the club, including the equalizer and the winning penalty in the 2012 Champions League final, as well as winning four Premier League titles, four FA Cups and three League Cups in his two stints at the club.

The 44-year-old says seeing the club “suffering” under the sanctions placed on it is hard.

“We’re talking the club where I played for nine years and where I won so many trophies, I made so many friends. I’m in the administration, players, the staff, the managers, the owner, everybody, everybody,” he explained.

“And to see the club suffering from these sanctions as a result of the crisis in Ukraine is a pity because I believe football has nothing to do with this.

“I sometimes question the decisions, the sanctions of the club, not letting the club operating at its full capacity is a big mistake.

“When you, when you sanction a club like that, you want to sanction maybe Roman Abramovich and his supposedly relations with Mr. Vladimir Putin, but I think you are creating more damage to the club’s people, the workers, who are English as well, who are European as well who live for the club. You are sanctioning the fans who travel every day for many, many years to make this club alive.

Drogba himself is making steps into his next role in football and was speaking ahead of a potential momentous day.

The former Ivory Coast international is one of six candidates in the running to be next president of the country’s football federation (FIF).

A process that was originally scheduled to take place in September 2020 but has been delayed for numerous reasons, the candidates will finally face a vote on April 23.

Ahead of the vote, Drogba told CNN that he is “really confident” of being voted to a position where he hopes to “unite around a vision of a football that brings us together and leads us to victories.”

Drogba — who earned more than 100 caps for the Ivory Coast national team and played in the 2006 and 2010 World Cups — believes that a more organized national set up can lead to more success on the pitch.

“I’ve been around many, many countries, many continents, and I’ve seen a lot, a lot of African talent everywhere I’ve been,” he said. “Just look at the France national team who won the World Cup (in 2018).

“I would say 70-80% of them are not born in Africa, but originally from Africa, from the parents or they’re born in Africa. And then they went to France, like at a very young age. We have those talents here.

“What we don’t really do is to put a team around them to let them understand that they have the qualities. It’s just a question of organization.

Drogba says he faced opposition to standing for election, saying his presence was “disturbing” the “system (that) was in place for more than 25 years.”

Beyond reorganizing the national team system, Drogba also points to revolutionizing the woman’s side of the game in the country, as well as players being paid on time, if he was to be elected.

“We don’t have a women’ league. The women’s league is played in two weeks,” he said.

“You have to know that here the players are paid less and $25-30 a month when they are paid. And so what do they do?

“And this doesn’t sound logical to me, and that’s one of the reasons why I come into the game and I surprised everyone.

“And they’re not ready for my candidacy because obviously the population is behind me.”