Tyson Fury vs. Dillian Whyte: 94,000 fans to watch the biggest heavyweight fight of the 21st century 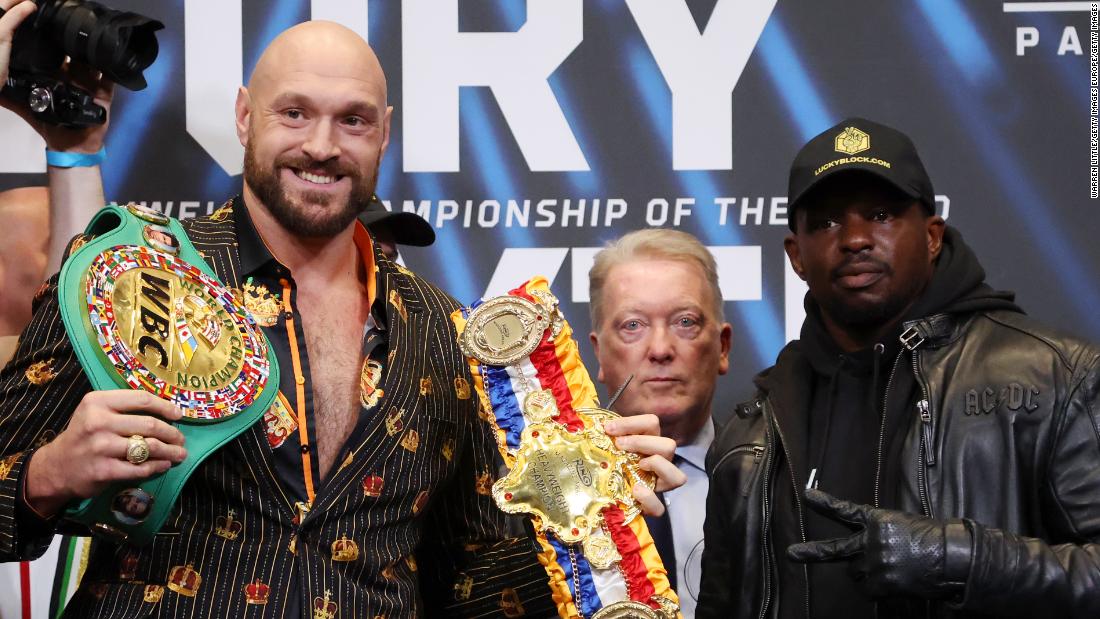 The bout will set the record for the largest attendance for a fight in the 21st century and the largest in Europe — quite the stage for these two British boxers.

In recent years, the build up to certain heavyweight bouts has been dominated by acrimony between the opposing fighters, but this one is altogether different.

There is an obvious mutual respect between Fury and Whyte; indeed, at Wednesday’s press conference, Fury alluded to their days together a decade ago when the pair would go head-to-head in sparring at training camps.

Much has changed since Fury and Whyte were those fledgling fighters — “a great journey,” as Fury called it — and the two are now the main attraction in one of the biggest nights in boxing history.

One man who knows the Mancunian well is former heavyweight champion Joseph Parker, who has been helping Fury prepare for Saturday’s fight.

“It’s going to be a tough fight, a good fight,” Parker told CNN Sport. “Both guys have been preparing very well … someone is going to get knocked out.”

That “someone,” he specifies, is Whyte. “Tyson is going to knock him out in the middle rounds, between five and nine,” Parker adds with assurance.

Heavyweight boxing has been blessed with numerous memorable fights in recent years, with Fury involved in many of the best, and Parker believes Saturday’s fight is “right up there.”

“It ranks right at the top.” he says. “Obviously the biggest crowd [in Europe] and you’ve got two top heavyweight fighters going head-to-head.

“It’s breaking a lot of records and I think everyone is excited by the buzz it’s [the fight] has been getting.”

READ: ‘He’s not the greatest,’ says Dillian Whyte of Tyson Fury
The fight has also generated additional interest as it’s taking place against the backdrop of the US Department of State offering rewards of up to $5 million for information leading to each of the arrests of three Irish “transnational organized criminals,” notably Daniel Kinahan, who has wielded significant influence in the boxing world in recent years.

Kinahan’s links to boxing come through his former ties to the agency MTK Global, an organization whose most prestigious client is heavyweight champion Fury. On Wednesday, MTK Global announced it had ceased operations.

“As a business we have faced unprecedented levels of unfair scrutiny and criticism since the sanctioning by the US Government of Daniel Joseph Kinahan,” said MTK Global in a statement.

“It is a matter of public record that Mr Kinahan’s involvement in MTK ceased in 2017, and despite repeated reassurances in this regard, unfounded allegations about his ongoing association with us and our fighters persist.

“Since leading promoters have now informed us that they will be severing all ties with MTK and will no longer work with our fighters, we have taken the difficult decision to cease operations at the end of this month.”

Fury hasn’t fought on British soil since his 2018 wins over Sefer Seferi and Francesco Pianeta.

Since then, he’s fought Deontay Wilder in the US on three occasions, drawing once and winning twice, to win and then retain the WBC heavyweight title.

It says something of Fury’s magnetism and extraordinary popularity among British boxing fans that the 94,000 tickets for Saturday’s bout sold out in a matter of hours when they were released back in March.

The opportunity for tens of thousands of fans to see Fury fight in the flesh wasn’t one they were going to pass up.

In the years since his last fight in Britain, fans have either stayed up until the early hours to watch his fights or, in the case of some 20,000 die-hards, traveled to Las Vegas to see them in person.

But perhaps the reason this fight has so captured the imagination of the nation is down to the fact it is looking increasingly likely that it will be Fury’s last.

At 33 years of age, having reached boxing’s summit on more than one occasion during his illustrious 14-year professional career, the Manchester-born fighter says he will be hanging up his gloves after Saturday’s bout.

When Fury first made the claim at the fight’s unveiling press conference in March, most took his words with a pinch of salt. There is seemingly still so much for Fury to accomplish; a hotly-anticipated British clash against Anthony Joshua or a world heavyweight championship unification fight against Oleksandr Usyk following the Ukrainian’s dismantling of Joshua back in September.

At Tuesday’s open workout next to Wembley Stadium, however, Fury reiterated that claim with an increased fervor.

“I know nobody believes me because they all think I’m after money or whatever else,” Fury told Top Rank. “I’m walking away. I’ve got nothing to prove to nobody, I’ve done what I’ve had to do and that’s it.

“I was always planning to walk away and here we are, walking away. The great Julius Ceasar once said: ‘There will always be somebody else to fight.’ There are a million young guys coming up.

“You can’t go on forever, just like Wladimir [Klitschko] couldn’t and Joe Louis, Mike Tyson, and Lennox Lewis before me. Every good dog has its day.”

Additionally, Parker told CNN he believes Fury is “very sincere” when he speaks about his impending retirement.

But to say that the anticipation around this fight was solely down to Fury would be doing a sizable disservice to Whyte, who most recognize as a dangerous and serious challenger.

Even forgetting his power and skill, Whyte’s hunger alone makes him a formidable foe. This opportunity for a shot at a world title has been long-awaited — and is well-deserved — and the 34-year-old is ready to take it with both hands, with multiple reports claiming this has been by far the most intense training camp of his career.

Curiously, though, Wednesday’s press conference was the first time these two fighters had come face-to-face in the build up to this fight. In fact, according to Fury, it was the first time “in years” they had seen each other in person.

Whyte had refused to take part in any promotional work — even failing to turn up to last month’s launch press conference — over a reported dispute of his share of the purse, among other issues.

“There’s two sides to every story,” he told the assembled media on Wednesday.

“You lot hear one side because they say a lot of things. Because I don’t say anything, they say you’re scared or hiding.”

However, the London-born fighter says the hype around this fight is as much down to him as it is Fury.

“Three great fights against Deontay Wilder and none of them have been completely sold out,” Whyte told Sky Sports.

“Tyson Fury is not this massive giant superstar everyone says he is, he’s not. The fight at Wembley is sold out because it’s Tyson Fury and Dillian Whyte, not Tyson Fury and someone else.”