‘My heart is torn’: As war rages on at home, these young disabled Ukrainian swimmers are stranded in Turkey 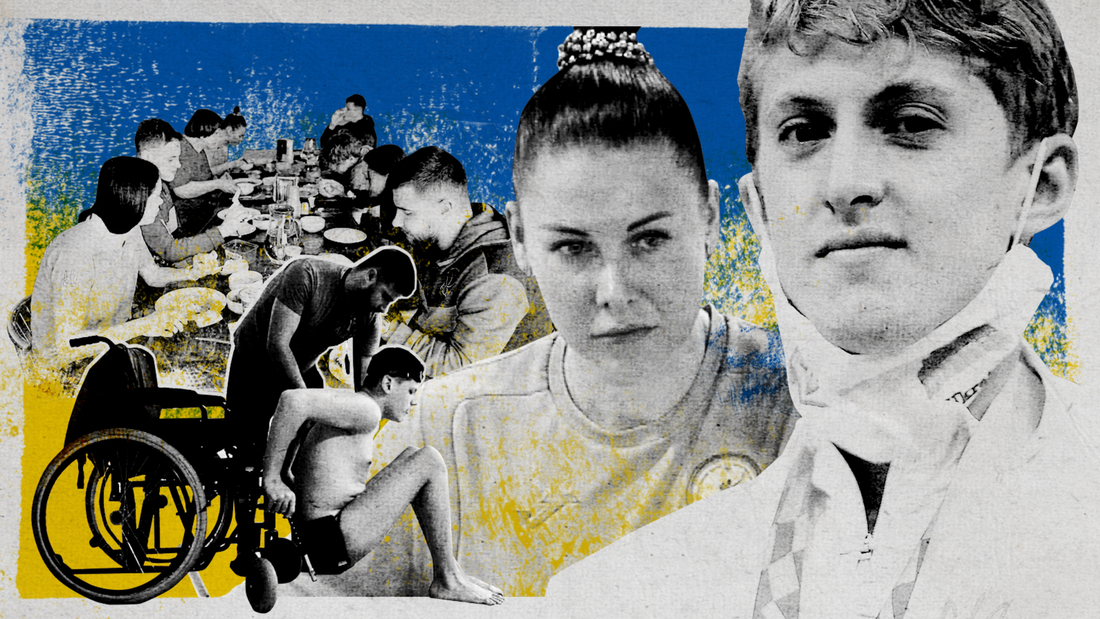 The camp of seven budding athletes arrived with their three coaches in the town of Silivri, just outside of Istanbul, to take part in a two-week training program.

While one young swimmer has traveled to Poland with his mother, they have been in Turkey for two months now, and many of their family members are still marooned in Ukraine.

Team member Victoria Kharchenko, who has cerebral palsy, says her parents find comfort in the fact that she is safe.

“They’re happy … we don’t need to stay in the air raid shelters, and do not hide,” the 16-year-old athlete tells CNN’s Jomana Karadsheh.

Caught in the crossfire of war

Kyrylo Garashchenko is one of the Ukrainian swimmers stuck in Turkey, and he is struggling to process what is happening as war rages in his homeland.

“I just try to (not) think about it, because it’s a lot of information about war,” the 24-year-old Paralympian says.

Garashchenko, who is visually impaired, competed at the Tokyo 2020 Paralympics last summer, where he won silver and bronze medals for Ukraine in the men’s 400-meter freestyle event, and the mixed 4×100-meter freestyle relay event respectively.

He hopes to add to his medal count at the upcoming World Para Swimming Championships in Madeira, Portugal in June, but says it’s “very difficult to stay in another country and prepare when (there is a) war in your country.”

Garashchenko, who is the oldest member of the team, hails from Zaporizhzhia — a southeastern Ukrainian city that has been caught in the crossfire of the war amid stalled evacuation attempts and previous occupation by Russian forces.
Ilia Sharkov, who has cerebral palsy, tells CNN it’s difficult to focus on his ambition of becoming a Paralympic swimmer when his parents live in the Russian-occupied city of Melitopol, where civilians have seen colossal explosions by Russian forces and the detention of their ex-mayor — who Ukrainian officials say was eventually freed.

To call and see their son, Sharkov’s parents must bike 50 kilometers (31 miles) from their home for internet access.

So 15-year-old Sharkov asks CNN to send his family a message: “My dearest father and mother, I love you so much.”

“I wish you happiness and health. Say ‘hello’ to my grandparents and my aunt.”

Sharkov’s teammates and their families are part of the roughly 12 million people who have been displaced due to the ongoing war.

Of that, there are about 4.9 million refugees and 7.1 million people internally displaced in Ukraine, Stéphane Dujarric, spokesperson for UN Secretary General Antonio Guterres, said on Monday during a news briefing.
Likewise, nearly two-thirds of Ukrainian children are also displaced due to the war, according to figures from UNICEF.

Coach Iryna Paveleva says that initially, the team had the opportunity to bond during the first two weeks of their trip to Turkey because they stayed in a house together in Silivri.

“We really became like one family … cooked food together, rested together, spent some time together,” she says. “This made us not just coaches and athletes, but more like kindred spirits.”

“Every day we thought about our families, about our children who are in Ukraine, about our parents and it was … this is probably such a shock state for us, and the children supported us so much. We could not even believe that children at such a small age can provide us with such moral support.”

But as the war in Ukraine has worsened, so has the young athletes’ welfare.

Their coaches previously sought out the support of child psychologists, although they can no longer afford their services.

Speaking about the young swimmers, Paveleva says: “They lack affection. we give them affection, warmth, and they give it to us probably even more.

“In the evening they don’t let us go, and ask to hug and kiss us.”

Nearly half a million children face serious risks to their mental and physical health due as a result of the conflict in eastern Ukraine, according to a UNICEF statement from early February.
“This trauma risks destroying a generation,” Sima Bahous, executive director of the UN gender equality and empowerment agency UN Women said in a statement in April.

As Paveleva juggles the needs of the young swimmers, she is also thinking about her own daughter, who lives with her elderly grandparents in Ukraine.

She tells CNN that her mind is split between making the journey back to Ukraine to take care of her family, and honoring her commitment to the young swim team in Istanbul.

Even if the team wanted to try to reunite with their families in Ukraine, such a journey would be risky — especially with the challenge of disability.

There are about 2.7 million people with disabilities in Ukraine, according to the European Disability Forum, a pan-European NGO.

Figures from Inclusion Europe, another NGO, estimated that there are around 261,000 people in Ukraine with intellectual disabilities that make them extremely vulnerable to the conflict.

“Every day my heart is torn two ways, between my family home and these children,” Paveleva says.

A home away from home

In the meantime the team has found a temporary home in Kasimpasa Sports Club, a Turkish professional football club based in Istanbul.

They have access to free accommodation and are served hot meals everyday, although increasingly rely upon charity to sustain themselves while training at a local public pool.

The group had arrived in Turkey with enough clothes for a short trip during colder months, but as the weather is getting warmer in Istanbul they need lighter clothes.

Earlier this month CNN came across a social media post published by an Istanbul resident, helping collect aid including clothes, shoes and snacks for the team.

After CNN’s report aired on Monday and was shared on social media platforms, several Istanbul residents including Ukrainians, Russians and others have offered to help and support the young athletes.

Some want to help send them clothes, snacks, money and books. Others offered to treat the team to a day out in Istanbul, or yoga and art sessions to help keep their minds off their ordeal.

Mykyta Dudchenko is a 15-year-old swimmer who has cerebral palsy. His aunt, Yana Protsenko, started an online fundraiser in February to generate donations for Dudchenko and his teammates, who have been sent clothes and fresh fruit from benefactors.

“Their spirits are not broken, and they want to continue training for their mental health and their dreams,” Protsenko said on her GoFundMe page, a fundraising site where she launched her efforts.

“They are far away from their families, friends, and their own country, and no one knows when they meet again,” she added.

For Dudchenko, the most challenging part of the day is speaking to his mother, Viktoria Dudchenko, on the phone.

“Are you sleeping well? Are you eating? You’ve lost weight my son,” she says to him over the phone. “I worry about you.”

“We hope the Ukrainian armed forces will throw the enemy out soon, and you’ll come back, and we will hug you,” she adds.