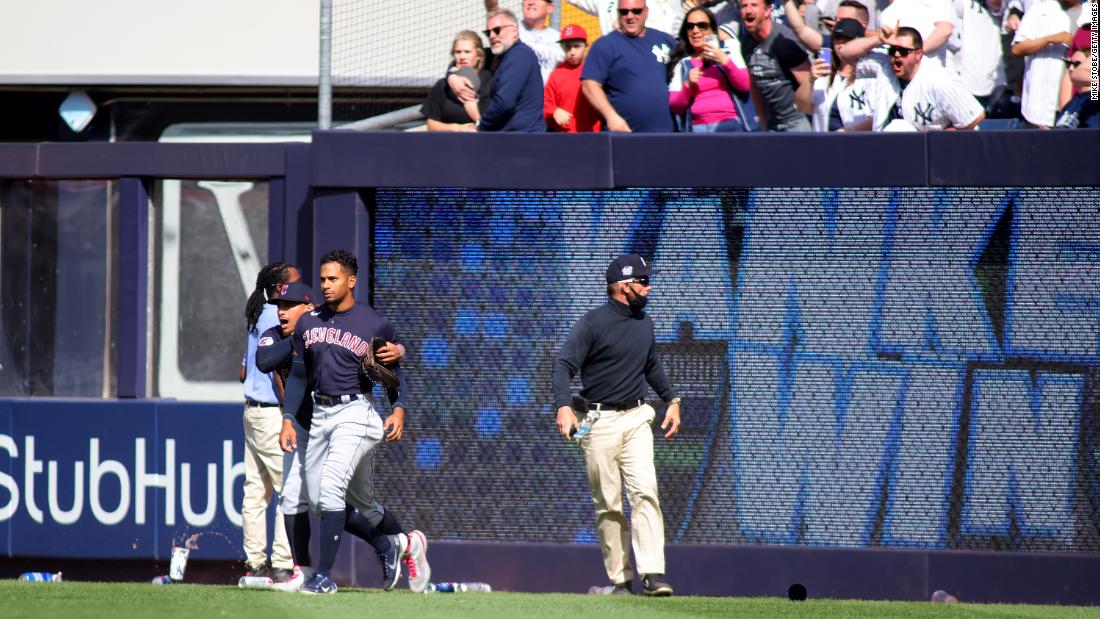 “Obviously there’s no place for throwing stuff onto the field in that situation,” Yankees manager Aaron Boone said in a postgame news conference.

“We certainly don’t want to put anybody in danger,” he said. “Love the intensity, but we can’t be throwing stuff out on the field.”

Tensions rose toward the end of the game. Cleveland was up 4-3 with two outs in the ninth inning when New York’s Isiah Kiner-Falefa hit a double off Cleveland’s Emmanuel Clase, tying the game and sending left fielder Steven Kwan into the wall as he chased the ball.

While a trainer went out to check on Kwan, outfielder Myles Straw was seen climbing the fence and confronting jeering Yankees fans.

“I think Myles was sticking up for his teammate,” Cleveland manager Terry Francona told reporters after the game. “The kid’s out there bleeding and we’re checking him for concussion, and I think emotions probably got a little out of control.”

On the next play, Gleyber Torres hit a single to win the game, and the unruly group of Yankees fans were seen throwing trash, including beer cans, onto the field. Ballpark officials and both dugouts took to the field to ease tensions.

Cleveland right fielder Oscar Mercado later told reporters he caught a beer can thrown at him. He said he wanted to see the fans in question “held responsible” but appreciated Yankees players coming out to tell them to knock it off.

“Regardless, I don’t think people can throw stuff at our players on the field,” Francona said. “That’s never going to be OK.”