‘Under the Banner of Heaven’ flies high, while ‘Shining Girls’ doesn’t 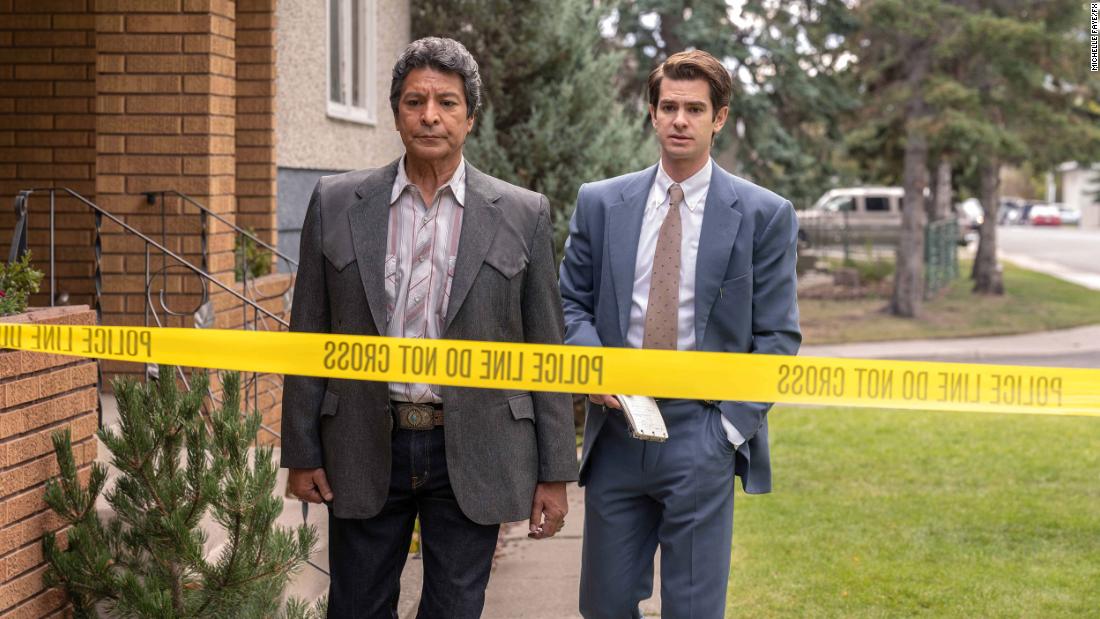 Playing like a cross between “True Detective” and “Big Love,” “Under the Banner of Heaven” begins with the gruesome murder of a woman (Daisy Edgar-Jones) and her child, exposing the kind of dark secrets that small communities elevated to true-crime status invariably seem to contain.
Adapted from Jon Krakauer’s book by Dustin Lance Black (“Milk”), the seven-episode series stars Andrew Garfield — coming off “Spider-Man: No Way Home” and his Oscar nod for “Tick, Tick … Boom!” — as Jeb Pyre, the detective who catches the case, which leaves widowed husband Allen Lafferty (Billy Howle) as the prime suspect. But the investigation finds more insidious roots that hint at a larger conspiracy, one that involves the sprawling Lafferty family’s embrace of fundamentalist principles and the sordid practices related to them.

Pyre, meanwhile, is a family man and member of the church, whose faith is tested by the grim nature of the crime and defensive response from local officials. His situation is balanced by his grizzled partner (Gil Birmingham), an outsider more than willing to play bad cop if that is what’s required.

The framing is a little flabby, as the flashbacks slowly putty in how the outspoken woman might have become a murder target. Nor does it help that the narrative flashes way back to the story of church founder Joseph Smith and those origins — an element of the book that, as presented in this format, somewhat distracts from the more contemporary plot, as if the story has taken an abrupt detour into a History channel docudrama.

Still, the central mystery provides a powerful hook, and the material is elevated by an inordinately good cast, with Sam Worthington, Wyatt Russell and Rory Culkin as Allen’s older siblings, with Allen chillingly saying, “I couldn’t hear the holy spirit in the same way my brothers could” after telling Pyre, “You might not be as good a Mormon as you think.”

“Under the Banner of Heaven” isn’t quite a great show, but it’s a solidly good one, which is more than can be said for “Shining Girls,” which mostly squanders a cast headlined by Elisabeth Moss, who doubles as its producer.

Based on Lauren Beukes’ novel, the project features Moss as Kirby, a newspaper archivist who survived a brutal attack but finds that her own reality keeps changing, as if the playing field is being reset. Her search for answers prompts her to team up with a reporter (“Narcos” star Wagner Moura, underemployed), seeking to somehow connect a trail of victims scattered across decades.

Jamie Bell co-stars as the mysterious time-traveler, while Phillipa Soo (“Hamilton”) is another potential victim. Yet the explanation for this science-fiction-style spin on a serial-killer story is left rather vague despite the obligatory flashbacks — it’s unclear what the rules are — not that those details make a whole lot of difference as the project kicks into thriller mode down the stretch.

Moss is obviously a draw, but even she can only do so much with thin and confusing material. While “Shining Girls” seems potentially intriguing at first glance, by the time one has watched to the end of its disappointing eight episodes its light is flickering, and for viewers, it’ll be too late to hit the reset button.

“Under the Banner of Heaven” premieres April 28 on Hulu.

“Shining Girls” premieres April 29 on Apple TV+. (Disclosure: My wife works for a division of Apple.)