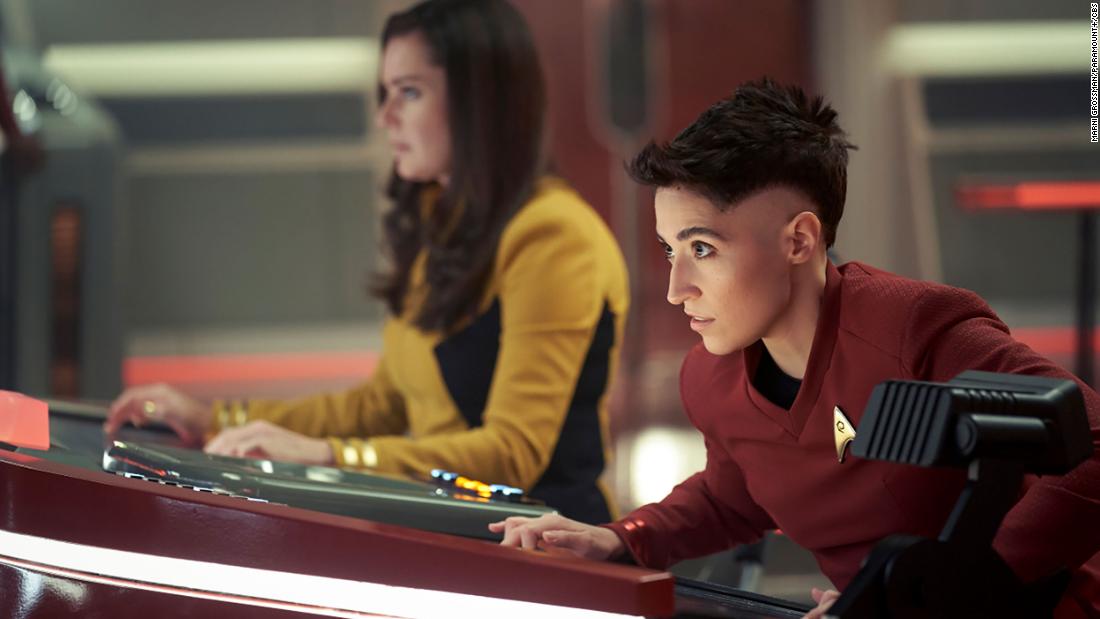 “It wasn’t until I got older and more mature that I began to appreciate the depth and the intellectual side of ‘Star Trek,'” says Roddenberry, who was 17 when his father, Gene, died.

Roddenberry is now all aboard “Star Trek: Strange New Worlds,” which premieres May 5 on Paramount+. A prequel to the original series that aired in the 1960s, it’s based on the years that Capt. Christopher Pike, a fan favorite who appeared in the original series, led the USS Enterprise.

Such a idealistic worldview may be a tough sell to today’s audiences, battered by hateful politics, violence, war and dire warnings about a rapidly warming planet. But it’s a change that Roddenberry, an executive producer with the new show, applauds.

“Saying nothing bad about the other shows, but this is the one I’m most excited about,” says Roddenberry, CEO of Roddenberry Entertainment, which develops sci-fi graphic novels, podcasts, television and film projects.

“It’s going to go back to the formatting of the original series. It’s the kind of thing we need to get out there to give us hope,” he adds. “I understand that this is just a TV show, but it inspires countless people to live better lives.”

What we can expect in the new series

Akiva Goldsman, the show’s executive producer, says the new series will be different and yet the same. Fans should expect more stand-alone episodes, more of the original series’ optimism and mind-bending twists reminiscent of “The Twilight Zone.”
Another wrinkle is the new show’s focus on some of “Star Trek’s” iconic characters. The show will examine the evolution of such characters as Spock and Uhura before they became mythic figures, Goldsman says.

“Our Uhura is young. She starts off as a cadet,” Goldsman says. “Where does she come from? What decisions did she make to allow her to be in Starfleet and become the heroine we know her to be?”

Another big change is in the captain’s chair. The character of Captain Pike is much different than Kirk, Goldsman says.

“Jim Kirk is a young boy’s fantasy of a ‘Star Trek’ captain,” Goldsman says. “He’s brash, impulsive — he knows the rules but doesn’t follow them. He’s a swashbuckler. Pike is a thoughtful man of reason who builds consensus.”

There are countless debates in the Trekkie universe about what television version of “Star Trek” is better, and whether subsequent series departed too much from the optimistic tone of the original. That optimism is reflected in the voiceover monologue by Captain Kirk at the beginning of each episode. He says the goal of the Enterprise is to “seek out new life and adventure,” and “explore strange new worlds” — not to conquer civilizations or force inhabitants to accept certain beliefs.

By contrast, subsequent versions of the show, like “Star Trek: Deep Space Nine,” featured some characters who were morally compromised or sometimes made decisions that contradicted their values.

Ben Robinson, co-author of “Star Trek — The Original Series: A Celebration,” says he hopes that a return to the franchise’s “original recipe” will preserve the hopefulness of the first series while offering complex, characters with moral struggles.

“I am looking for the original series, with a 21st century budget,” Robinson says. “If they can combine sophisticated stories with beautiful special effects and the 1960s ‘Right Stuff’ energetic storytelling, then I’m going to be over the moon.”

Why hopeful storytelling is never outdated

One of the unstated questions in the new series is one you won’t see on many of the show’s discussion boards: Will Star Trek’s optimism and emphasis on inclusivity feel outdated in today’s cynical world?

It’s hard to have faith in humanity by looking at news headlines. Racial, ethnic and political divisions seem as deep as the outer reaches of space itself.

Then again, feel-good, inclusive TV series such as “Schitt’s Creek” and “Ted Lasso” found huge audiences in the pandemic, a trend many attribute to audiences being starved for hopeful stories.

“Dark times require hopeful storytelling,” says Goldsman. “Optimism and belief in a better future is necessary for a lot of us.”

Goldsman says it’s a myth that the original “Star Trek” aired in an gentler era that was much different than ours. He cites 1968 as an example.

“We were at war,” he says of the US’s involvement in Vietnam. “The civil rights movement was still in its own intense moment of conflict. Bobby Kennedy and Martin Luther King Jr. were killed, not to mention the looming nuclear threat. The country was quite factionalized. The ’60s were a tumultuous time.”

“Star Trek’s” futuristic world allowed it to address some of the most explosive issues of that era in a way that no other show could, says Robinson, the author. The composition of the Enterprise crew was itself a call for tolerance, he says.

Consider: The US was embroiled in a cold war with the Soviet Union, but one of the Enterprise’s main officers was Russian (Chekov). The country had only 20 years earlier ended a brutal war with Japan, but the ship’s helmsman was Japanese (Sulu). Black people couldn’t vote in many parts of the country, but a Black officer — and a woman — (Uhura) was the ship’s communications officer.
Spock was the ultimate model minority on the Enterprise. He was an outsider who endured prejudice. Black and biracial people identified with him (there’s a beautiful story about the actor Leonard Nimoy writing a letter to a biracial girl who felt rejected). One Star Trek fan called him the “Blackest person on the Enterprise” because he “never let ‘the man” see his emotion and “was cool like the best jazz musicians.”

“It’s metaphorical storytelling that allows you a way of taking science and fantasy to look at your own society,” Robinson says. “He [Roddenberry Sr.] talked about race by having a Vulcan instead of a Black guy.”

It’s a minor miracle that Star Trek’s creator was so hopeful about humanity. He saw and experienced so much tragedy during his lifetime. Roddenberry Sr. was born in El Paso, Texas, and almost died as a toddler when his house caught fire. A passing milkman rescued him.

He had more close calls as an adult. He was a pilot for the US Army Air Corps who flew combat missions in the South Pacific during World War II. And he was a crew member of a Pan Am flight that crash-landed in the Syrian desert, killing 14 people. A later stint as an officer with the Los Angeles Police Department exposed him to the seamier side of life.

And yet despite all that, Roddenberry imagined a compassionate and harmonious future world that was much different from the one he lived in.

How can someone who’d seen so much tragedy be so optimistic?

Robinson, the author, pointed to a quote from musician John Lennon.

“Lennon said the reason I go on about peace and love so much is because I’m really angry,” he says. “Maybe you look for what you need for yourself. Gene was a troubled soul for sure.”

Roddenberry converted his pain into a vision of the future that still inspires millions more than 50 years later. Phrases such as “Live long and prosper,” “Beam me up, Scotty” and “warp drive” are now part of popular culture.

And so is “Star Trek’s” humane message, which lives on in the new show.

“If people say, ‘Why is ‘Star Trek’ still around?’, I will tell you why,” Roddenberry Jr. says. “It’s because it’s the idea of appreciating all of the things that are different and not just tolerating them, and that it’s the differences that we’re going to grow from.”

The response to “Star Trek: Strange New Worlds” will reveal whether that vision still resonates with people, or whether the barriers of cynicism and hate are now too high for even the USS Enterprise to steer through.