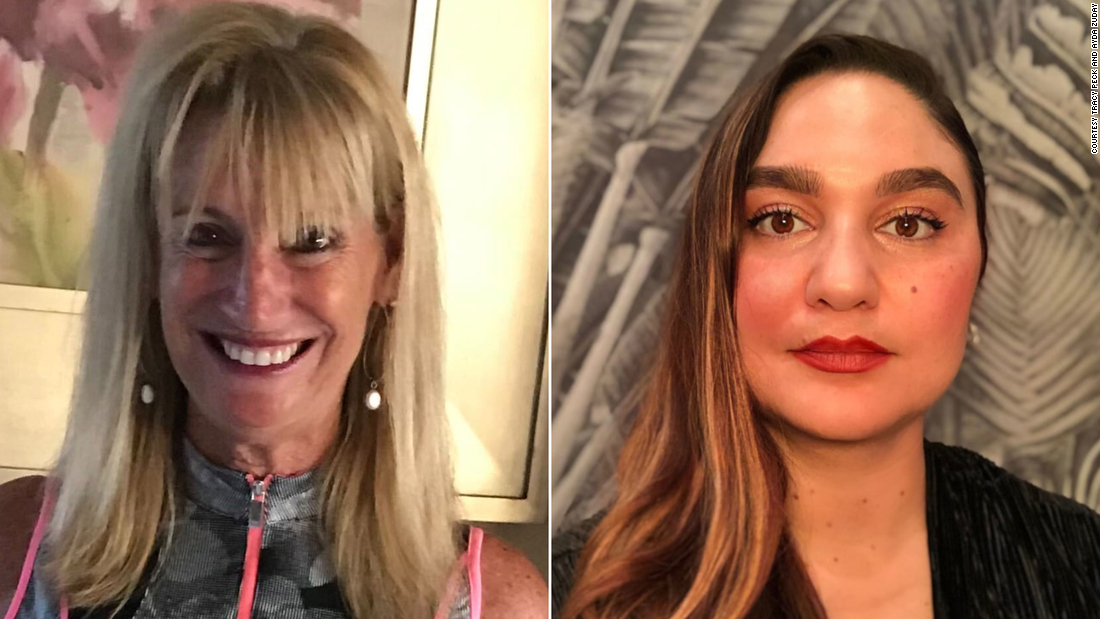 (CNN) — Tracy Peck was running errands Saturday when she got a series of texts and calls that shocked her — first from her tennis coach, then from her best friend.

“Have you seen the CNN story?” both of them told her. “That has to be you.”

At first, Peck brushed it aside. She was driving and had no idea what they were talking about. Then she pulled over and opened the link they’d sent.

A picture of a letter in her handwriting popped onto Peck’s iPhone screen. As soon as she saw it, she says, memories from a plane ride 23 years ago came rushing back.

She remembered sitting next to two sisters fleeing the former Yugoslavia. She remembered how young and frightened the refugees seemed, how they reminded her of her own daughters and how their experience fleeing war was heartbreaking and unlike anything she’d ever dealt with.

She remembered reaching into her purse before they got off the flight, pulling out an envelope, writing them a note and placing her dangly earrings and a $100 bill inside.

Peck had no idea then how much that envelope would come to mean to both girls. And until she read the CNN story Saturday, Peck says she had no idea that one of the sisters, Ayda Zugay, had been searching for her for nearly a decade.

Tracy Peck, left, had no idea that Ayda Zuday, right, had been searching for her for nearly a decade.

Tears streamed down the 70-year-old massage therapist’s face as she read the sisters’ descriptions of how the gift had changed their lives. For years Peck, who lives in suburban Minneapolis, says she’d worked to teach her children to be kind, telling them you never know how your actions might affect others. She never imagined she’d experience such a stunning example of how truly important an act of kindness can be.

She wasn’t sure how to reach the sisters, but she knew she needed to try.

Friends and family helped with a whirlwind of tweets, emails and texts, and less than a day later, Peck and the sisters reunited on an emotional Zoom call.

She told them she’d been forever changed by hearing this latest chapter in their story.

“It warms my heart beyond anything I’ve ever experienced in my life,” she said.

This childhood photo of Ayda Zugay and her sister, Vanja, was taken after they came to the United States. Tracy Peck says she remembers meeting them on a flight from Amsterdam to Minneapolis.

How they found each other

Ayda Zugay couldn’t believe her eyes. There, smiling in the center of her computer screen, was Tracy — the woman who she’d been trying to find for so long with only an envelope, a first name and her own memories to help her.

Zugay remembered the woman who sat next to her and her sister had been carrying a tennis racket and talked about playing in Paris. And she knew she could never forget the beautiful act of generosity welcoming her and her sister to the United States. She was excited so many more people now knew the story, too — and especially thrilled to see many people tweeting that they wanted to be more like Tracy.

This 1999 photo shows Tracy Peck (circled in red) on a group trip with other Minnesota women to play tennis and watch the French Open.

The CNN story circulated rapidly online, reaching more than 2 million readers. After it published, Zugay says she was amazed to get messages of support from as far away as Angola, Brazil and India. On social media, many said they were inspired by Tracy’s generosity and offered suggestions of new search avenues to find her.

What about trying to get a passenger manifest from US Customs and Border Protection? Or a DNA sample from the envelope? Or getting the US Tennis Association to publicize her search to their members?

Zugay felt inspired to keep going with her search. But in the end, she didn’t need to turn to the ideas amateur sleuths had sent on social media to find Tracy. Instead, two of Tracy’s close contacts came to her.

First Zugay saw a tweet from one of Peck’s daughters, alerting her to the handwriting match. Then a tennis coach reached out.

That coach, Susan Allen, also recognized Peck’s handwriting. But even more than that, the story made sense.

Asked by CNN to provide an example of her handwriting, Tracy Peck rewrote this version of the 1999 note. Peck, 70, says her handwriting is so distinctive that it’s a running joke with her friends — not to mention she’s known for using emojis and always signing her name with a heart.

“Knowing Tracy,” she told CNN, “that is exactly what Tracy would do.” Allen says she’s known Peck for years as a generous person who doesn’t think twice about helping others.

But Allen expected more proof would be needed to show that Zugay and Peck had been on the same plane. Allen reached out to her fellow coach, Deanne Sand Johnson. Together, they scoured their records to help.

Back in May 1999, their company Love / To Travel gave women in Minnesota a chance to travel internationally to play tennis and watch tournaments. They led a group of 18 women — including Peck — to Paris that month to watch the French Open.

Johnson kept a scrapbook documenting the trip. One page featured a team photo. Another included a receipt from a travel agency with the group’s itinerary. The second leg of their return journey was a flight from Amsterdam to Minneapolis on May 31, 1999 — the same date and route Zugay recalled flying.

This receipt shared by one of Tracy Peck’s tennis coaches shows the itinerary for their group’s 1999 trip. They were on a flight from Amsterdam to Minneapolis on May 31.

Allen started a group text putting Peck and Zugay in touch. Then she shared the images.

“The pictures are so surreal to see!” Zugay wrote. “This is so beautiful!”

Allen was thrilled. “I am taking deep tennis breaths I am so excited,” she wrote.

Zugay, who lives in Boston, suggested a Zoom reunion the next day.

“So excited that I can’t even type!” she told the group.

She was increasingly convinced she’d found the mystery woman she’d been searching for, but still she didn’t know what to expect.

Before the call, she went to a park to calm her nerves. She realized something she’d needed for years finally was within reach.

They shared an emotional reunion over Zoom

“Hello beautiful ladies!” Peck cried gleefully as the Zoom call began. Zugay noticed she was wearing dangly earrings, just like she had been the day they met on the plane.

“It’s been more than 20 years,” Zugay said, holding up the envelope.

A page from Johnson’s scrapbook shows the receipt and photos of the tennis tour group as they prepared to leave Minneapolis in May 1999.

Peck told the sisters how vividly she remembered what it felt like when she met them.

“It just touched my heart so much that I just felt compelled that I had to help you in some way,” she said.

Zugay’s sister, Vanja Contino, chimed in from her Connecticut home.

“Your generosity is still in me,” she said, “because I’ve been paying it forward ever since.”

Zugay told Peck things she’d wanted to share with the note’s author for years — how thankful she was, why the gift had meant so much, how rare she now knows such welcoming messages are, how they’d used the money to scrape by eating pancake mix and Coca Cola for an entire summer.

She admitted she’d been nervous about the Zoom at first, then realized that suddenly she was feeling stronger.

“You know those huge doors that they have in old places across the world? It felt like that big, heavy door just got shut. And I’m finally able to move forward and thrive. … And it just makes me so happy,” Zugay said. “Thank you for reminding me to be strong.”

Peck said she was the one who was grateful. At a time when there’s so much pain and suffering in the world, she hopes others will take more time to give back.

On the 1999 trip to watch the French Open, Tracy Peck (right) and her teammates met tennis star Monica Seles.

“I just want to encourage everybody in the world to just be kind. What does it hurt? Except it helps everyone. Smile, make eye contact, help anyone that’s in trouble or in danger. And I just don’t know why anyone wouldn’t do that,” she said. “So, I’m very, very thankful that I have found you girls, that you have found me.”

“Yes, we did,” Zugay laughed. It still felt strange to say it out loud.

“You did, after all that long time,” Peck said. “And we have a lot of catching up to do.”

They hope to meet up in person someday

Together, Peck and the sisters marveled at all the factors that led to them being seated in the same row that day, how many people had worked together to share the story and how social media helped them reconnect so quickly over the weekend.

Peck, shown here with members of her tennis tour group near the Eiffel Tower, says she isn’t sure now which of her friends was sitting in the row near her on the flight back to Minneapolis. Zugay remembered another person named Tracy, and helping someone with knitting. Peck was the only Tracy in the group, but coaches say at least two others were knitters. Zugay hopes she’ll also have a chance to speak with whoever it was someday.

Crossing paths that day, and again finally 23 years later, felt meant to be.

They talked about the possibility of meeting up in person someday. Maybe they could even spend a Memorial Day weekend together in the future, marking the anniversary of when Zugay and Contino arrived in the United States.

Peck promised the sisters that whenever they visit, she’ll make them the best pancakes they’ve ever had.

A recent photo shows sisters Vanja Contino and Ayda Zugay. “You both are remarkable young women,” Tracy Peck told them in their recent Zoom reunion. “I’m so thankful I was sitting next to you on that airplane…and so proud of you both for what you’ve become and how your life has turned out here.”

Peck already had five children — three daughters and two stepsons. She feels that now she has two more.

They may have been strangers 23 years ago when Peck wrote that note on the plane. But now, Peck says, they are family.

She was only in Paris for three days. She met the love of her life on the Metro