Brazil has a towering new statue of Jesus 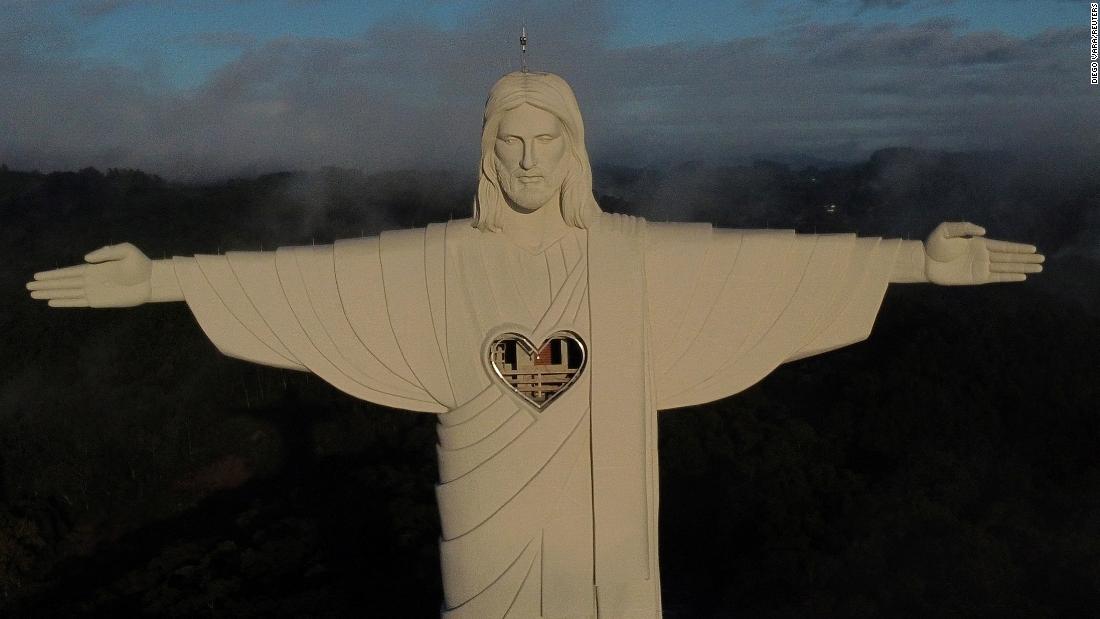 (CNN) — The Brazilian town of Encantado has a towering new statue of Jesus Christ that rivals the height of Rio de Janeiro’s famous “Christ the Protector” statue.

Made of steel and concrete, the statue is 43 meters (141 feet) tall, 4.9 meters taller than Rio’s structure, according to Friends of Christ Association (AACristo), the local organization responsible for building the statue.

The structure was designed by sculptor Genésio Gomes Moura and his son, Markus Moura. It’s set to be the third-tallest statue of Jesus in the world, after a 249-foot monument currently under construction in Mexico and a 172-foot figure in Poland.

Brazil is building one of the world’s tallest statues of Jesus in Encantado, Rio Grande do Sul, standing 43 meters (140 feet) tall.

In a statement on the Cristo Protetor de Encantado’s official website, AACristo says the statue was completed in late April, but a surrounding tourist complex is still in the works and won’t be finished until early 2023.

An elevator inside the statue is also still to be installed, according to Brazil media. Once completed, the elevator will take visitors to a lookout point at the height of Christ’s heart, rewarding them with spectacular hilltop views.

“It will be a glass opening from where people will be able to film and photograph the valley,” head project supervisor Artur Lopes de Souza explained on the AACristo website.

The project is expected to cost around $353,000 in total. AACristo is asking for donations to finish the project.

For now, visitors can go and admire the soaring statue up close — visits are permissible on Saturdays and Sundays, according to the Cristo Protetor de Encantado website

The hope is the new statue will boost tourism in the town of Encantado and the surrounding area, which is close to Brazil’s borders with Uruguay and Argentina.

The Christ the Redeemer statue has overlooked the city of Rio de Janeiro for almost 90 years and remains one of Brazil’s most famous tourist attractions.

Top photo: a drone image of the new statue in Encantado, Brazil, taken on April 29, 2022 with a drone. Photo credit REUTERS/Diego Vara