‘Babysitting’ the next generation of New Zealand’s endangered sea lions 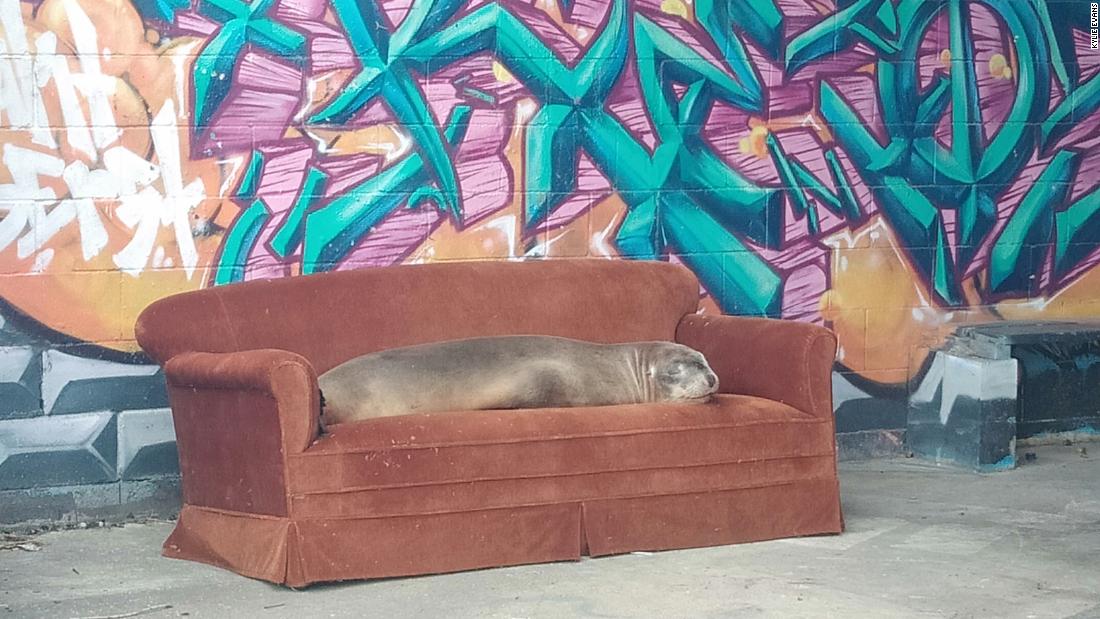 (CNN) — Like many teenagers, Hannah Yeardley, a 17-year-old living in Dunedin, New Zealand, babysits in her spare time. The only difference is that it’s not children she’s looking after, it’s sea lion pups.

From December through February, during the breeding season and while the newborns are at their most vulnerable, Yeardley wanders down the white sands of Long Beach on her weekends and school holidays, checking in on sea lion families nesting in the area. She’s volunteering for the New Zealand Sea Lion Trust, an organization working to protect the endangered species.

Around the Otago peninsula on New Zealand’s south island, sea lions are living cheek by jowl with their human neighbors. Local residents are stepping in as “babysitters” to help keep the newborn pups safe.

Her favorite sea lion is Zoe, a female of about the same age as her, with a dark patch around the eyes and a distinctive scallop shape in her flipper.

“She’s just turned 17,” says Yeardley, whose birthday was in March. “It’s very cool seeing her every year, and going on that journey with her, (watching her) having pups.”

It has been a bumper year for sea lions on the Otago Peninsula, a finger of land that sticks out from the city suburbs of Dunedin into the Pacific Ocean and is home to the biggest sea lion population on mainland New Zealand, according to the country’s Department of Conservation. Twenty-one pups were born, making it the most successful breeding season for the endangered species in almost 200 years.

Sea lions are returning to New Zealand’s mainland after being hunted to near extinction.

Babysitter Hannah Yeardley hopes that by looking after New Zealand sea lion pups she can help the population grow.

Sea lions flourished along New Zealand’s coasts until commercial hunting, which began in the early 19th century and continued through to the mid 20th century, brought the animals close to extinction. Remnant populations survived hundreds of miles south on sub-Antarctic islands, such as the Auckland Islands and Campbell Island, where the majority of breeding still occurs today.

Then, in the early 1990s, a lone adventurous female ventured back to the mainland and gave birth to a pup on St Clair beach. She became known as “Mum” and a statue of her now sits proudly on the esplanade above St Clair.

“This one female was responsible for bringing back a population of sea lions to Otago,” says Jim Fyfe, biodiversity ranger for the coastal Otago district of New Zealand’s Department of Conservation.

In a stroke of luck, Mum’s first three pups were female, which got the population off to a good start, explains Fyfe. “By 2000, we were having two or three pups being born, then by 2010, six to eight pups were being born, and in the last few years, we’ve had 18 to 20. It feels like we’re on that little exponential curve at the bottom of population growth,” he says.

But sea lions have returned to a very different habitat to that of 200 years ago — roads, cars, motorbikes, humans, dogs and all sorts of potential hazards are now prolific in the region. This presents huge challenges in keeping the population healthy and happy.

Eager to find a shelter away from adult male sea lions — which weigh up to a hefty 450 kilograms and have been known to trample pups while on the search for a mate — mothers often head inland to nest, but this only brings them closer to human threats.

They’ve been found nesting in backyards, dog kennels, outbuildings and the local golf course, says Fyfe, sometimes causing trouble with human neighbors. He recalls one young female that spent around three months sleeping under a house, until the owners got fed up and evicted her because “the house got a bit smelly.”

“Their night-time habits of coming in at two o’clock in the morning and mooing for their pups can make them an annoying neighbor,” he adds.

But for all their bad habits, sea lions are the ones in mortal danger. This year, a three-month-old sea lion pup was struck and killed by a vehicle on an Otago Peninsula road, and motorcycle tracks were recently spotted beside a popular “nursery” area where many mother sea lions and their pups have settled.

The Department of Conservation and the New Zealand Sea Lion Trust, with its army of “babysitters” such as Yeardley, try to manage these threats. The organizations keep track of females and their pups, cordoning off areas where they might be nesting, and putting up signs warning passersby and asking for all dogs to be kept on a lead. Sometimes, if sea lions have chosen to nest in an exposed area, Fyfe and his team will create a simple shelter to help protect the pups, and last year, they closed a road in Dunedin for a month to keep a sea lion family safe.

“The seasonal breeding cycle is a critical point for (the sea lions)” says Fyfe. “We ask for people’s patience, it’s not a permanent thing.”

But as the sea lion population continues to grow, this personalized service may become less viable. Instead, Fyfe hopes technology will provide a solution. He was involved in a research project, published last year, that uses algorithm-based models and GIS mapping to identify critical habitat and could help rangers prioritize areas for protection.

“They’re not actually going to bite you”

Ultimately, one of the simplest solutions for protecting sea lions from human threats is educating people on how to respond to them.

“If people get too close to sea lions when they’re active, the sea lions have a bluff charge … and people tend to sort of turn on their heels and run away,” says Fyfe. “Running is the wrong thing to do. They’re not actually going to bite you — 99 times out of 100 they would stop and sniff you. So just try and stay calm and keep walking out of the area.”

Fyfe hopes that as locals get used to the presence of sea lions on their beaches and around their homes, they will learn to coexist. “People don’t need to be afraid, they’re not an aggressive animal,” he says. “They’re more playful and curious.”

Fortunately, raising awareness and interest in the animal is not hard. “They’re their own best marketing tool, (because) on the whole, they’re super cute,” he adds.