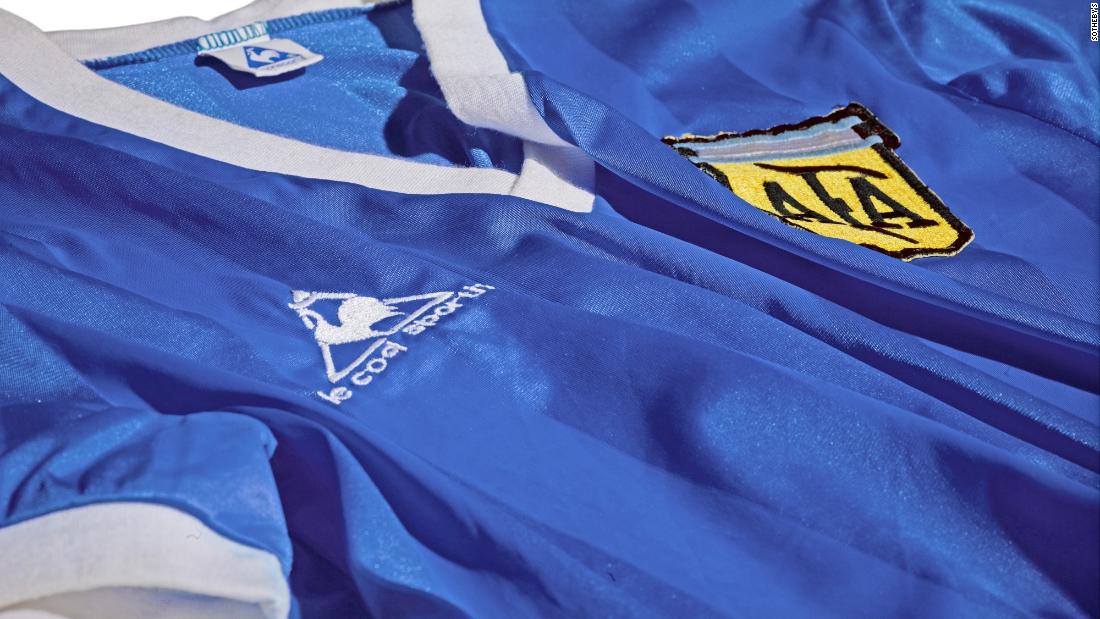 It had previously been in the possession of former England midfielder Steve Hodge, who exchanged shirts with Maradona after Argentina’s 2-1 quarterfinal victory.

During the game, Hodge unintentionally flicked the ball into the air for Maradona to score the infamous ‘Hand of God’ goal.

A few minutes later, Maradona scored the “Goal of the Century” — as it was later voted in a FIFA poll — receiving a pass near the halfway line, before weaving his way towards goal, evading a series of England players and tackles and then slotting the ball past Peter Shilton.

“This historic shirt is a tangible reminder of an important moment not only in the history of sports, but in the history of the 20th century,” Brahm Wachter, Sotheby’s Head of Streetwear and Modern Collectables, said in a statement.

READ: How Diego Maradona redefined football in the space of less than five minutes

“In the weeks since we announced the auction we have been inundated by sports fans and collectors alike, with a palpable excitement in the air for the duration of the public exhibition — and this unfiltered enthusiasm was echoed in the bidding.

“This is arguably the most coveted football shirt to ever come to auction, and so it is fitting that it now holds the auction record for any object of its kind.”

According to Sotheby’s, the previous auction record for an item of sports memorabilia was the original autograph manuscript of the Olympic Manifesto from 1892, which sold for $8.8 million in December 2019.

The previous record for a match-worn shirt was held by Babe Ruth’s Yankees road jersey, which sold for $5.64 million in 2019.

*Individualization of the Sotheby’s shirt to the shirt worn at the time Maradona scored the infamous goal was undertaken by the pre-eminent sports memorabilia photo-matching firm, Resolution Photomatching and was subsequently reviewed by Sotheby’s Chief Science Officer, who physically examined the shirt to confirm the matched features,” added the auction house in its statement.