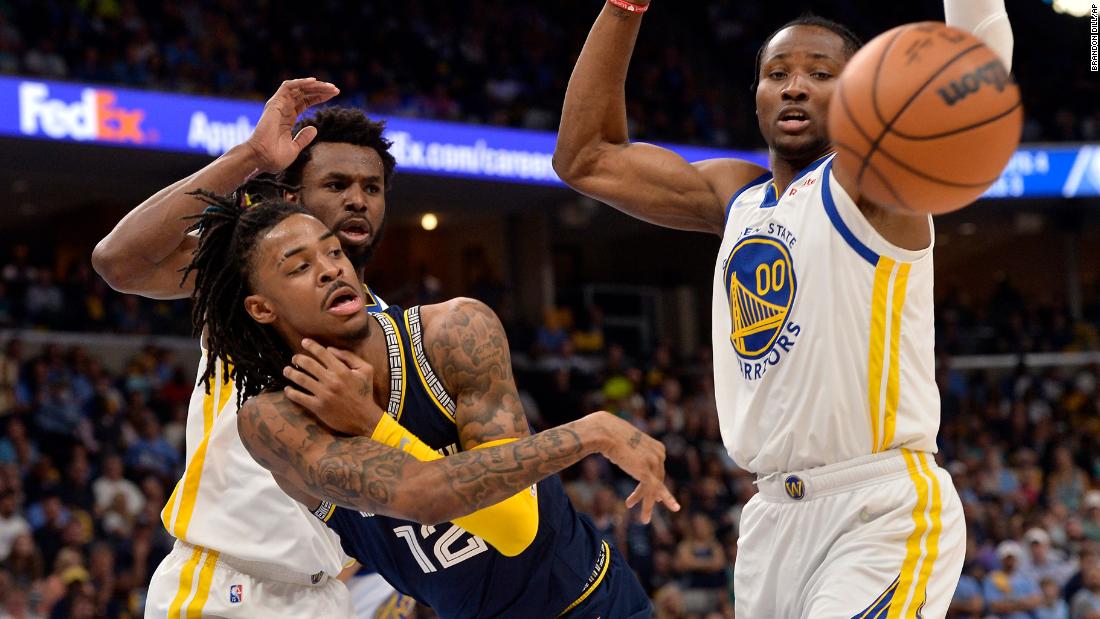 The game was knotted up heading into the fourth quarter, 77-77, when Morant took over. The 22-year-old scored Memphis’ final 15 points as he helped take control of the game late on to stamp his mark on the affair.

But he finished the game with blurred vision after being poked in the eye in the third quarter. On the TV broadcast, Morant could be seen saying, “I can’t see.”

After the game, he explained that he was still struggling with his vision. “I still can’t [see],” Morant told the media. “I can see on the middle. I can’t see on the outside. I got punched trying to get the rebound.”

Morant added: “I got another good eye over here — 20-20 vision right here. Thank God for my right eye.”

While Morant’s performance had the world agog with wonder, Warriors coach Steve Kerr was focused on an incident early in Game 2.

Kerr insisted that Grizzlies forward Dillon Brooks “broke the code” after he hit Gary Payton II in the head from behind as Payton II was going up for a lay-up just under three minutes into the game. The Warriors guard suffered a fractured elbow after the incident.

Brooks was then ejected after being assessed a flagrant foul-2 — described in the NBA rulebook for contact deemed to be “unnecessary and excessive” — on Payton II.

Kerr called the play “dirty” in a mid-game interview, when asked about the physical nature of the game.

“No, that wasn’t physical, that was dirty,” Kerr said.

“There’s a code that players follow where you never put a guy’s season-slash-career in jeopardy by taking somebody out in mid-air and clubbing them across the head and ultimately fracturing Gary’s elbow,” he added.

The sides will next meet in Game 3 in California on Saturday, with their best-of-seven series now tied at 1-1.

Celtics fight back in Game 2 to level series against Bucks

Meanwhile in the Eastern Conference, the Boston Celtics comfortably beat the Milwaukee Bucks 109-86 in Game 2 to level the series at one game apiece.

Jaylen Brown finished with a game-high 30 points — with 25 of those in the first half — to go along with five rebounds and six assists.

“We knew we had to come out and play like our season was on the line and we did that,” Brown said postgame.

“It’s the playoffs. Survival of the fittest. Every game counts.”

Jayson Tatum continued his great play in the playoffs with 29 points and eight assists, while Grant Williams came off the bench to pitch in 21 points and five rebounds for Boston.

Two-time MVP Giannis Antetokounmpo struggled in the first half — finishing the game 11-for-27 from the field — as the Bucks failed to contain a red-hot Celtics team, although the ‘Greek Freak’ finished with 28 points, nine rebounds and seven assists.

Game 3 for the teams is on Saturday in Milwaukee.