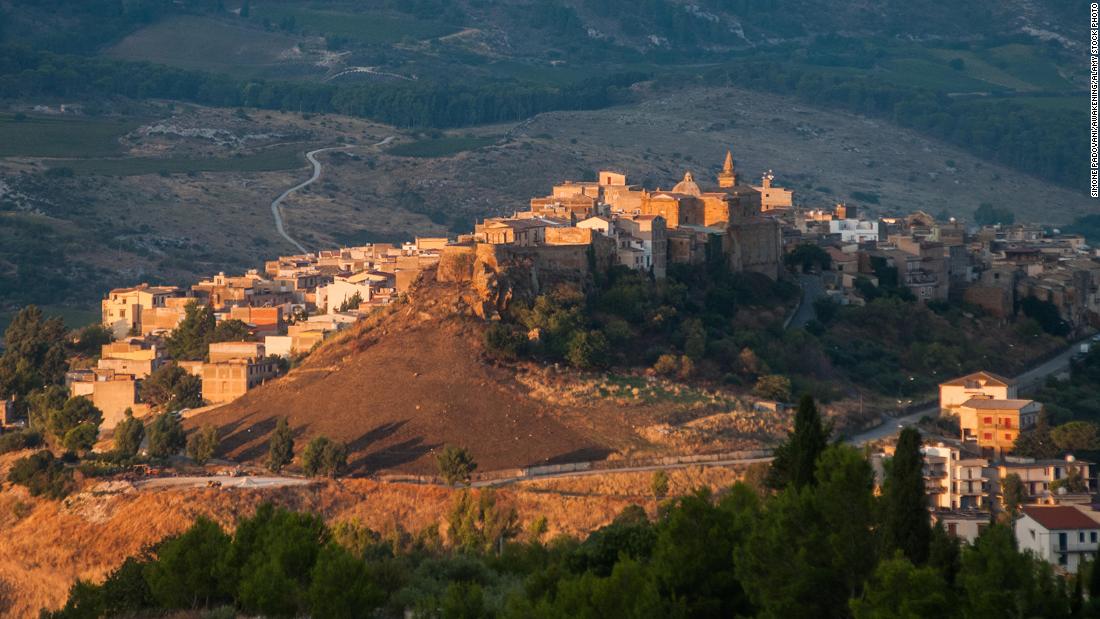 Editor’s Note — Sign up to CNN Travel’s Unlocking Italy newsletter for insider intel on Italy’s best loved destinations and lesser-known regions to plan your ultimate trip. Plus, we’ll get you in the mood before you go with movie suggestions, reading lists and recipes from Stanley Tucci.

(CNN) — There’s a place on the Italian island of Sicily where you’re increasingly likely to hear an American accent wafting down its narrow streets instead of the local language.

Sambuca di Sicilia, which gained a reputation as one of the first places in the country to sell off old houses for next to nothing, is becoming something of an Italian “Little America” after a wave of mostly Americans moved in to snap up bargain properties and breathe new life into the town.

The Sicilian town began attracting overseas buyers in 2019 when it made CNN headlines by selling off 16 dwellings for €1 each, or a little over a dollar. Then again in July 2021 when it offered 10 more old buildings for a symbolic €2 each.

By the time the second application deadline closed last November, the town hall was again flooded with hundreds of requests from interested buyers. Houses were eventually auctioned to the highest bidder, for between €500 and €7,000 ($540 and $7,560).

Nearly all the new buyers are from North America, says deputy mayor Giuseppe Cacioppo. Some bought their house site unseen while others defied Covid travel restrictions and flew over to take a look.

“Let’s say that almost 80% of people who wrote to us, applied and took part in this second auction either come from the States or are American,” Cacioppo says. “There’s a lot of interest from American buyers, and luckily it isn’t waning. The pandemic has been a challenge in pulling off this new sale, but we’ve been lucky. All went well.”

So what motivated these new buyers to take ownership of earthquake-damaged properties in deepest Sicily? Surprisingly, many apparently didn’t just want to acquire a cut-price vacation retreat. They also want to help in reviving the village’s buzz and its economy.

‘I’m giving it away’

David Waters says he’ll use crowdsourcing to fund his renovations.

David Waters, an internet businessman from Idaho with a passion for Italian real estate, plans to renovate his newly acquired Sicilian abodes through crowdfunding — and then give them away.

He bought two adjacent buildings by placing winning bids of €500 for each. They’re located in Sambuca’s quietest corner, an ancient district where abandoned houses line the streets.

Waters describes himself as a fan of Italy’s one euro homes project and says he wants to contribute to the revamp of dying, neglected communities.

“I wanted to create a way for the incoming investors to support smaller communities like Sambuca of Sicily,” he says. “I want to make it possible for someone wishing to realize their dream of owning a piece of Italian history to do just that.”

Waters says his crowdfunding campaign will offer reward tiers, ranging from merchandise to overnight stays in the finished home, for those who want to support the local community.

“I purchased two properties in order to have the possibility of starting with a small crowdfunding campaign and stretching to a higher campaign goal.”

He says donations and services will be offered to improve Sambuca’s park, roads and infrastructure.

“We are going to involve the crowdfunding community as much as possible by giving them the power to vote on what we offer within these community services,” says Waters.

Crowdfunding members will take part in the renovation and also be given ticket codes, representing a chance to win his Sambuca properties, based on what tier they’ve chosen to participate in.

Rewards will be fulfilled before the properties are awarded to the giveaway winner, who will be selected randomly by computer.

Although his two-floor properties need a thorough makeover, Waters says he was fascinated by their location and view, and wants to show people how such dilapidated homes can be transformed into “something gorgeous and great.”

One home is tiny, while the adjacent one is spread on 80 square meters and comes with seven rooms.

The draw of Italian cuisine is what pushed Arizona-based chef Daniel Patino, co-founder of a fresh food chain in the US, to take the big step forward and grab a slice of la dolce vita.

Patino snapped up the only available building with three floors and a panoramic terrace by placing a bid of only €2,500 — and winning. He did it all remotely, from the US. A local Sambuca lady contacted him through the town hall and sent over a video and photos of the property, enough to give Patino an idea of what he was bidding for.

“It’s more than an adventure,” he says. “Perhaps a gamble?

“I placed a bid sight unseen after looking at all properties online, but this one in particular just spoke to me. It had an outside little rustic patio. I could not see what the inside was like because it might have been dangerous to walk in, so I guess it will need quite a lot of remodeling.”

Patino doesn’t yet know what exactly he plans to do with it — whether to use it just as a holiday home or also as an Italian branch of his food chain. For now, he says, it’s just a dream come true, and also a walk down memory lane.

“I’ve always loved Italy, when I traveled earlier in my career as a professional chef, I discovered Italy’s food culture and why food is so important to Italians.”

“I also learned what Italian lifestyle is. It’s about living life, not going at a hundred miles an hour like we do in the States. It’s enjoying tranquility, taking time to relax and not always be worried about work. It’s simply the best of all worlds.”

Patino says his wife wasn’t on board at first, telling him “you’re crazy, it can’t be real.”

Now that the property is his, he says he’ll just see where it goes from here.

He might decide to start making some of his fresh salads in Sambuca and adapt American-style healthy food and homemade dressings to antipasto alla Siciliana.

Brigitte Dufour wants to turn two abanoned buildings into a refuge for artists.

Brigitte Dufour, a French-Canadian lawyer and founder of a human rights organization, bought two abandoned dwellings in the historical Saracen district — a small one for €1,000 and a larger home for €5,850. She placed both bids without seeing either one.

“Just to be sure, I was aware the competition was big so I thought placing a bid on two different houses would increase my chances of success,” she says.

Dufour says she wants to help the local community by offering space to artists from all over the world escaping crises.

Her smaller two-floor, 50-square-meter (about 540 square feet) property will serve as an artist residence, she says. It will be a place where artists can express themselves and “take a break from the difficult environment and pressure in their home countries.”

“They can stay for two weeks or a whole month, and be inspired by the beauty of Sicily and Sambuca to create artworks that talk about gender issues, dignity, human rights. They can benefit from using a nice safe place.”

The property is in a good shape with a terrace providing an outside space with a view of the surrounding green hills. Dufour likes the ancient majolica tile painted floors which, she says, give the house a traditional feel. She even found an old garlic braid dangling from a wall when she bought the place.

Dufour says the properties she purchased are in good shape.

“It’s quite better than what I expected, not a ruin,” she says. “Everyone was telling me ‘oh but you’ll get a ruin.’ Instead, it has good walls, but there is quite a bit of renovation to do.”

Dufour plans an eco-friendly restyle and will be seeking advice from €1 house buyers who have already remodeled their homes.

Her second property, measuring 80 square meters (about 860 square feet), will serve as both private residence and extra space for incoming artists.

“I thought it was best to have more than one house to bring in more artists, but then when I visited Sambuca after I won the bids I fell in love with the village and thought I might keep this second home for me and my family.

“My children and my family in Canada, especially my brother and sister, are really quite excited about this,” says Dufour, who particularly loves how the beach is a 25-minute drive from Sambuca.

If the artists’ residence ends up needing more space she will use parts of the second house for it, welcoming artists too if needed once it is renovated.

The second house has a huge open space which she says would be ideal for hosting social events and exhibitions, with vaulted high ceilings and a great panorama. Unlike the first floor, the second level needs extensive remodeling.

“I was unable to see it as it was dangerous to walk inside the rooms,” she says. “It wasn’t clear how solid the floor is. But you can really feel the place.”