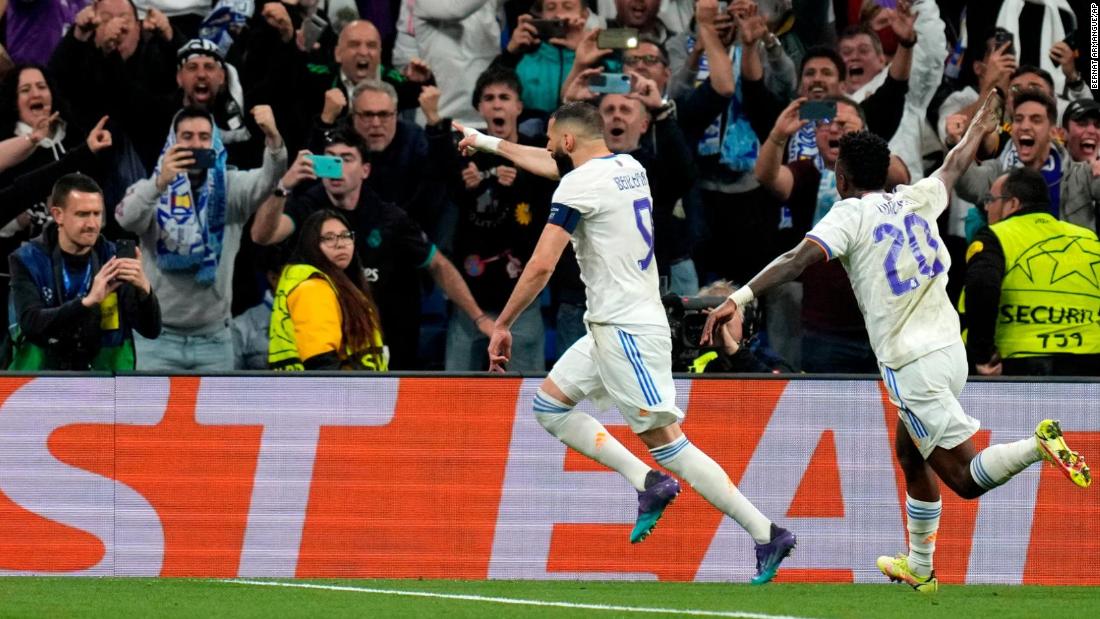 The last time the two teams faced each other was in Kyiv in 2018, when Salah left the field in tears after being injured in a tackle by Sergio Ramos. Real Madrid eventually won 3-1 and lifted their 13th European Cup.

Now, in Paris — after the final was moved from St. Petersburg following Russia’s invasion of Ukraine — the Reds and Los Blancos will meet again.

Real Madrid, having failed to make a single shot on target all evening, were 5-3 down on aggregate as the clock ticked towards 90 minutes on Wednesday.

Then, two goals — one on the stroke of 90 minutes and one in added time — from substitute Rodrygo left the score level on aggregate and dragged the match to extra time.

Carried on by the raucous atmosphere that had sparked around the Bernabéu, Real’s onslaught continued, yielding a penalty in the 95th minute. Karim Benzema stepped up, converted and propelled his side into the Champions League final.

In the quarterfinal, a second-half hat-trick in the return leg from Benzema downed Paris Saint-Germain and overturned a 2-0 deficit on aggregate. In the semifinal against Chelsea, a late goal from Rodrygo forced the tie to extra time before Benzema scored the decisive goal in the 96th minute.

“I cannot say we are used to living this kind of life, but what happened tonight happened against Chelsea and also against Paris,” said Real Madrid manager Carlo Ancelotti, according to the BBC.

“If you have to say why, it is the history of this club that helps us to keep going when it seems that we are gone.

“The game was close to finished and we managed to find the last energy we had. We played a good game against a strong rival. When we were able to equalize, we had a psychological advantage in extra time.”

It was “another mad night,” said Real midfielder Federico Valverde, according to the BBC.

“When City scored, it felt like everything was falling apart — all that effort and fight in every round, it felt lost.

“But the fans were a big help for us to keep fighting to the end. When the goals go in, you think ‘we’re going to win today,'” he said.

And faithful to the chants Real fans chorused around the Bernabéu — “hasta el final, vamos Real” (“Until the end, let’s go Real”) and “sí, se puede” (“yes, we can”) — Madrid’s squad pulled off another miraculous result for the ages.