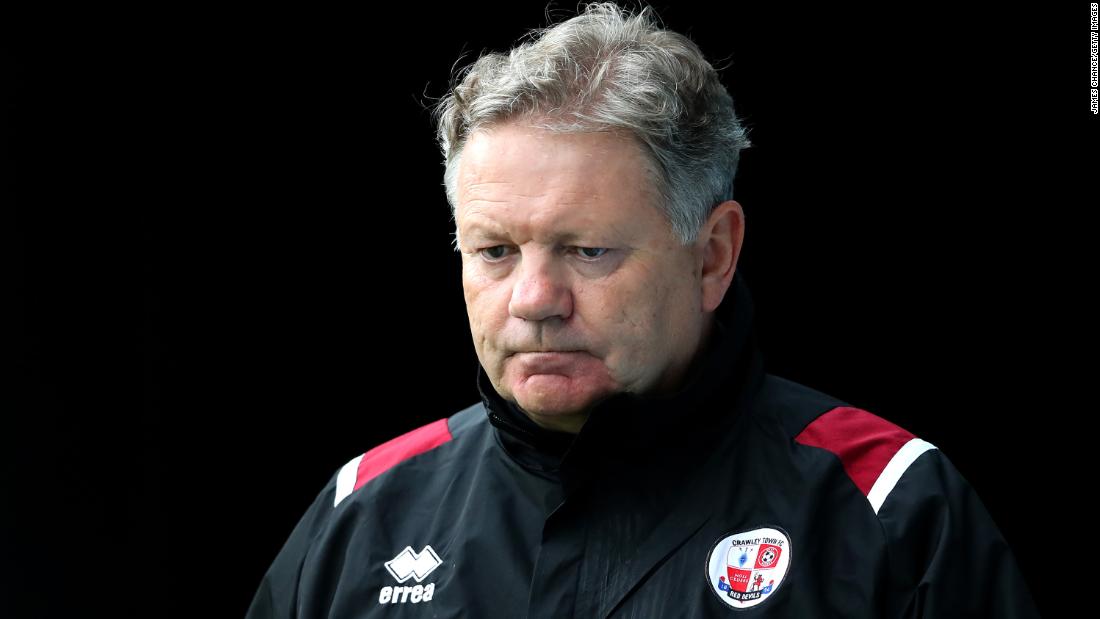 “We’re looking forward to the next era of Crawley Town Football Club,” said Preston Johnson, co-chairman of the club in a statement on Friday.

“We have an opportunity to build on more than 125 years of rich history and take this club to the next level. We’re eager to partner with our players and supporters as we build a team and community that Red Devils fans can continue to be proud of — both on and off the pitch.”

CNN has tried to reach out to Yems through the club but did not immediately hear back.

Previously, the English FA told CNN it was conducting an investigation into the allegations levied against Yems. The FA told CNN on Friday that their position still stands.

In April, the club announced that Yems had been suspended pending an investigation and said racism and discrimination of any kind will not be tolerated.

“Crawley Town Football Club was made aware of serious and credible accusations that first team manager John Yems used discriminatory language and behavior toward our players,” the club said in a statement on April 23.

“We take these allegations seriously and, effective immediately, have suspended him indefinitely as we investigate and consider further punitive action. Let us be clear: Crawley Town Football Club stands behind our players, employees and supporters, and we will never tolerate racism or discrimination of any kind.”

Tony Burnett, CEO of equality and inclusion organization Kick It Out, said: “I want to be clear, these are allegations. But allegations that are extremely concerning, nonetheless.

“If football is going to move beyond incidents like these, we need to empower anyone who witnesses discrimination like this to report it. We need people to feel safe knowing their reports will be taken seriously, and that they have the support of allies in wider football space.”

Crawley Town FC are currently 12th place in League Two and are next scheduled to play on May 7 against Oldham Athletic.

The club said the search for a new manager will begin immediately and that assistant manager Lewis Young will continue to serve as interim manager for the remainder of the season.