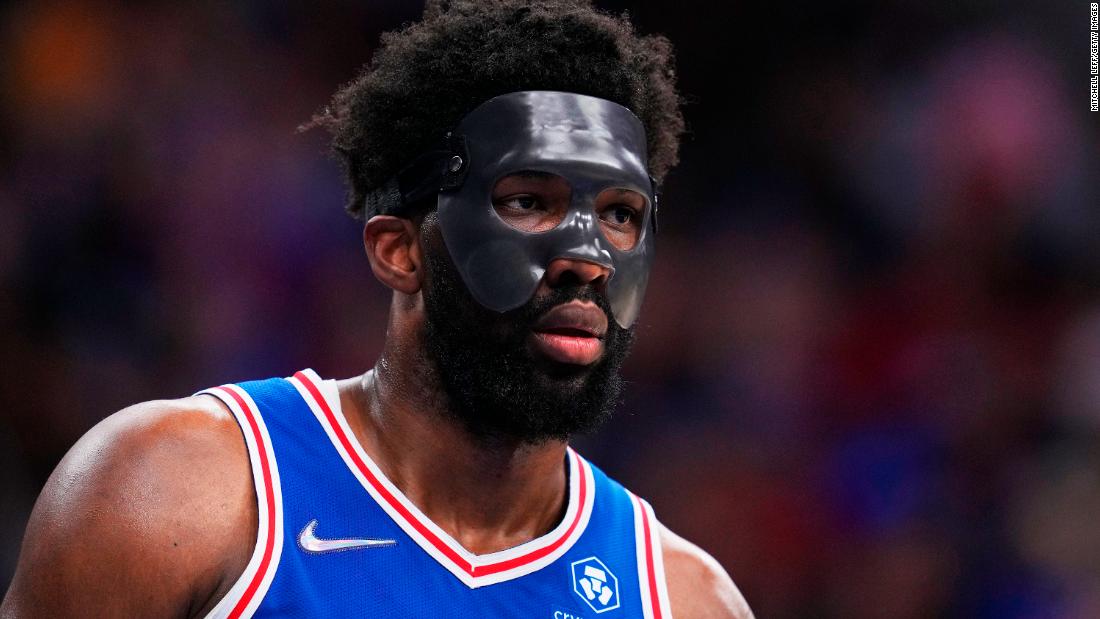 Recovering from an orbital fracture and a torn thumb ligament, the 28-year-old cleared concussion protocols just hours before the Philadelphia 76ers crucial Game 3 clash with the Miami Heat in the Eastern Conference semifinals.

All that was missing was a hero’s cape, as Embiid proceeded to score 18 points to help keep the 76ers’ playoff dreams alive with a 99-79 victory at Wells Fargo Center.

Adding a game-high 11 rebounds and an assist, Embiid’s efforts helped the 76ers tear away in the fourth quarter to cut the Heat’s advantage to 2-1 in the best-of-seven series.

Tyrese Maxey led scoring for the 76ers alongside Danny Green with 21 points, a fitting total given the return of his team’s MVP candidate — Embiid wears No. 21.

“I was so happy to see 21 [jersey] hanging up in the locker room,” Maxey told reporters.

“Just the attention that he demands is great for us, and just a testimony to his will and to his want to win.”

The Cameroonian’s return marked the culmination of a rapid recovery, having only been upgraded from ‘out’ to ‘doubtful’ by the 76ers on Friday morning.

After Wednesday’s Game 2 defeat, 76ers coach Doc Rivers had said that Embiid had “so many steps to go through” before playing any role in Game 3.

“It was a struggle,” Embiid admitted. “Really because of the concussion and dealing with a bunch of symptoms, but I’m glad it went away and I’m glad that I’m back.”

Embiid’s return underlined a bittersweet night for the Miami Heat’s Jimmy Butler, who had said earlier in the week that he wanted to see the 76ers star return so he could face off against his personal MVP nomination.

Butler’s wish was granted and he rose to the challenge against his former team with a game-high 33 points, adding nine rebounds and two assists, but was the leading light in an altogether blunted Heat offense. Tyler Herro was the team’s second-highest scorer with 14 points, with nobody else reaching double digits.

The Heat will have until Sunday to remedy their issues before returning to Wells Fargo Center for Game 4.

“You add Joel to any team; the game, the scout report, it changes drastically,” Butler said. “It’s been like that for his entire career.

“That’s not the reason we lost the game — we didn’t get back, turned the ball over, we didn’t get stops, we fouled, there was a lot that went into that — but he is a big part of it.”

Meanwhile in the Western semifinals, the Dallas Mavericks ended an 11-game losing streak to the Phoenix Suns to drag themselves back into the series with a 103-94 victory.

The Maverick’s dynamic duo of Jalen Brunson and Luka Doncic dazzled with 28 and 26 points respectively, Doncic narrowly missing out on a triple-double with 13 rebounds and nine assists as he continued a scintillating playoff run.

The Slovenian is just the seventh player in NBA history to average 35 points, 10 rebounds and five assists across the first three games of a series, according to ESPN Stats and Info.

“Energy man, I think the energy was insane,” said Doncic. “This crowd gets us going, the crowd was amazing the whole game.

“The energy and the execution we were better, we trusted ourselves, and that’s what we gotta do every game.

“We believe, they gotta win four so it’s not over yet,” Doncic added.

Having struggled to get a handle on the Suns’ evergreen Chris Paul in Game 2, an aggressive defensive performance from the Mavericks spoiled the 37-year-old’s birthday, forcing Paul into seven turnovers by the halfway stage.

“It felt like all seven of them were back to back to back,” said Paul. “If I don’t turn the ball over like that I feel like it’s a different game.”

Jae Crowder’s 19 points led scoring for the Suns, who will have the opportunity to close out the series back in Phoenix should they bounce back with victory to make it 3-1 on Sunday for Game 4.