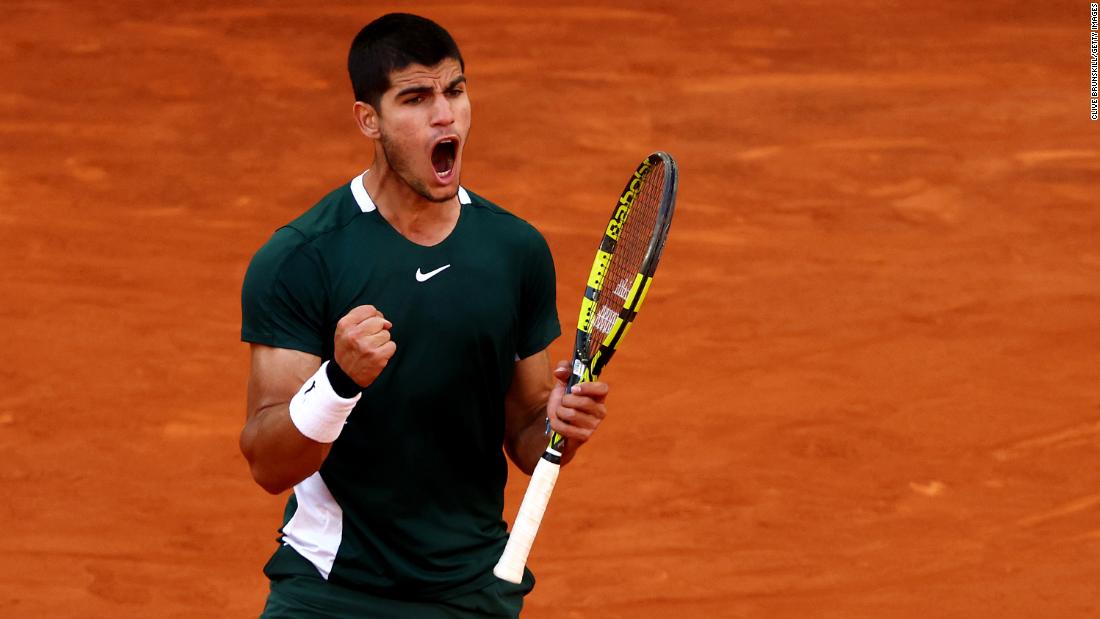 Just 24 hours after defeating compatriot Rafael Nadal, the 19-year-old fought back to beat world No. 1 Novak Djokovic in a sensational three-and-a-half-hour classic on Saturday to reach the Madrid Open final.

Emboldened by a rapturous home crowd at the Manolo Santana Stadium, a 6-7(5) 7-5 7-6(5) victory over the Serb saw Alcaraz become the first player in history to beat Nadal and Djokovic in back-to-back matches on clay.

Having only turned 19 on Thursday, Alcaraz took the match to the 20-time grand slam winner from the outset, a spectacular array of drop shots helping the world No. 9 to take the second set after agonizingly losing the first on a tiebreak.

And just as Real Madrid had done in spectacular fashion against Manchester City in the Champions League last week, the Spaniard completed a stunning comeback, this time triumphing in the tiebreak to spark bedlam among the stands.

Alcaraz then penned ‘Un partido en Madrid es molto longo’ (‘A game in Madrid is a long time’) on a nearby TV camera, invoking a comment made by Real Madrid legend Juanito in 1986 that has since become synonymous with the club’s frequent comebacks.

Feet on the ground

With a match-time clocking in at three hours and 35 minutes, it was the perfect sign-off for Alcaraz, who will become the Madrid Open’s youngest ever finalist when he faces Germany’s Alexander Zverev on Sunday.

Alcaraz’s run in Madrid continues an incredible season for the teenager, after become the youngest ever winner of the Miami Open in April, but the youngster is keeping his feet firmly on the ground.

“I’m not going to tell you that,” Alcaraz replied when asked who the best player in the world was currently.

“We are going to have a great time to enjoy the moment, but tomorrow I’m going to play a final of a really big tournament … tonight I’m going to be very focused to be able to recover and to be as best as possible for tomorrow’s match.”

Alcaraz had received glowing praise from Nadal after his victory in Miami, who predicted it would be the “first of many” for his compatriot, and Djokovic shared Nadal’s sentiments in defeat.

“Great things to come from this talent in the future, good luck in the final tomorrow,” Djokovic tweeted.
The Serb remained world No. 1 for a record-extending 369th week after a second-round win over Gaël Monfils on Wednesday.