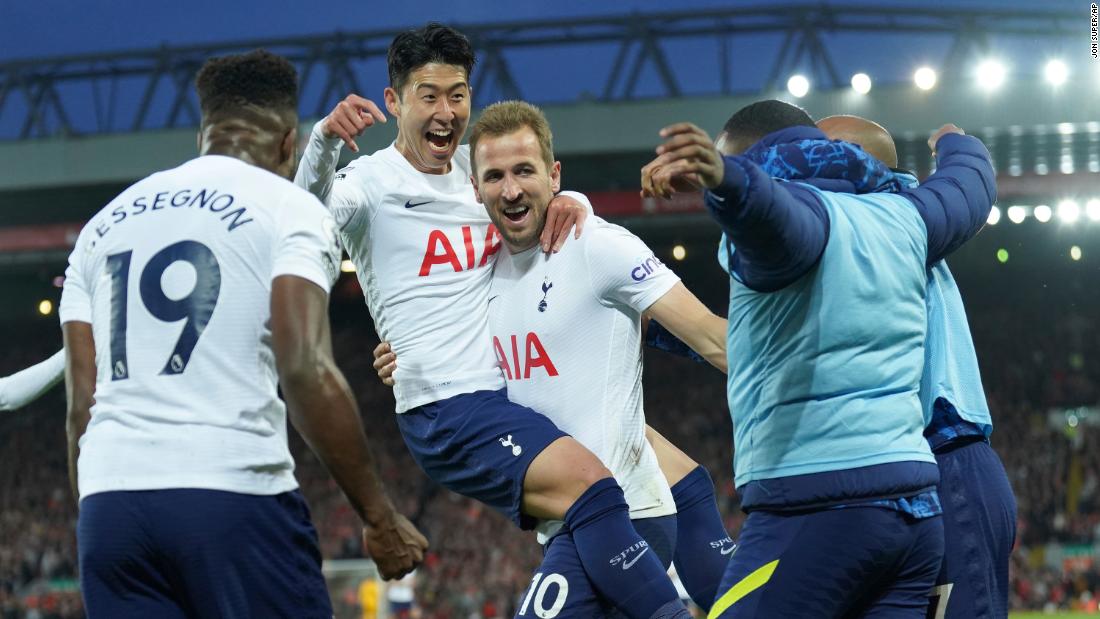 A dogged defensive display earned Spurs a 1-1 draw at Anfield on Saturday, a result that took Liverpool top of the Premier League on goal difference. Yet come the final day of the campaign, it may well be looked back on as the day that the title slipped away to Manchester City.

With Liverpool already needing City to drop points in their last four games, victory at home to Newcastle on Sunday will see City take a three-point lead at the summit as it looks to defend it’s crown.

Should it be successful, Liverpool’s dreams of becoming the first side ever to win the Premier League, Champions League, FA Cup and League Cup will be extinguished.

Arriving on the back of 13 wins in their last 14 league games — the only exception a 2-2 draw at City — Liverpool was firm favorite to overpower a Spurs side battling to reach the top four, but despite dominating possession, found themselves frustrated by a resolute wall of white.

Spurs’ Italian coach Antonio Conte has forged a glittering career from a combination of defensive solidity and counter-attacking dynamism, a philosophy that reaped its reward 10 minutes into the second half on Saturday.

His 20th league goal of the season — the only player to reach the milestone without penalties — the South Korean superstar has again dazzled for Spurs this year despite a mixed season for the team.

A deflected strike from the in-form Luis Diaz 15 minutes from time looked set to tee up an inevitable Liverpool onslaught and goal; yet Spurs held firm, and could even have snuck a dramatic winner with better decision-making late on.

“To have a good result was positive,” Conte told reporters after the game, with Spurs now a point behind rivals Arsenal in fourth.

“On the other hand, I think maybe we have to be a bit disappointed. I have seen, in the eyes of my players, disappointment because we had the chance to win the game.”

Reflecting on “one of the toughest games” he’d ever played, Son explained the need for a more defensive approach.

“Liverpool is one of the best teams in the world at the moment, so sometimes we need to defend,” Son told BT Sport.

“We did well today, this was our game plan.”

The assessments of Son and Conte marked a stark contrast to those of Liverpool boss Jurgen Klopp, who slammed Spurs’ approach.

Citing the away side’s 35% possession, Klopp said the approach was “not me.”

“I am sorry, I am the wrong person to ask [about Spurs’ defending] because I don’t like this kind of football,” Klopp said.

“We play a world class team, they sit back … the game plan works for these games, but they are still 5th.

“They obviously work for everything, time wasting, these kind of things … smart, but it makes it not easier for us.

“Absolutely fine, it’s just I can’t. I respect everything they do. But it’s not me,” Klopp added.

Klopp and Liverpool will now hope Newcastle can take something from City on Sunday before they travel to Aston Villa on Tuesday.

An FA Cup final and a Champions League final later this month leaves Liverpool with the chance to achieve a historic treble regardless of the Premier League.

“If you ask me, my favourite situation would be if it stays like this, on the same points total because City and us lose the rest of the games in the Premier League,” Klopp said.

“That would be great. But we all know this is not going to happen.”