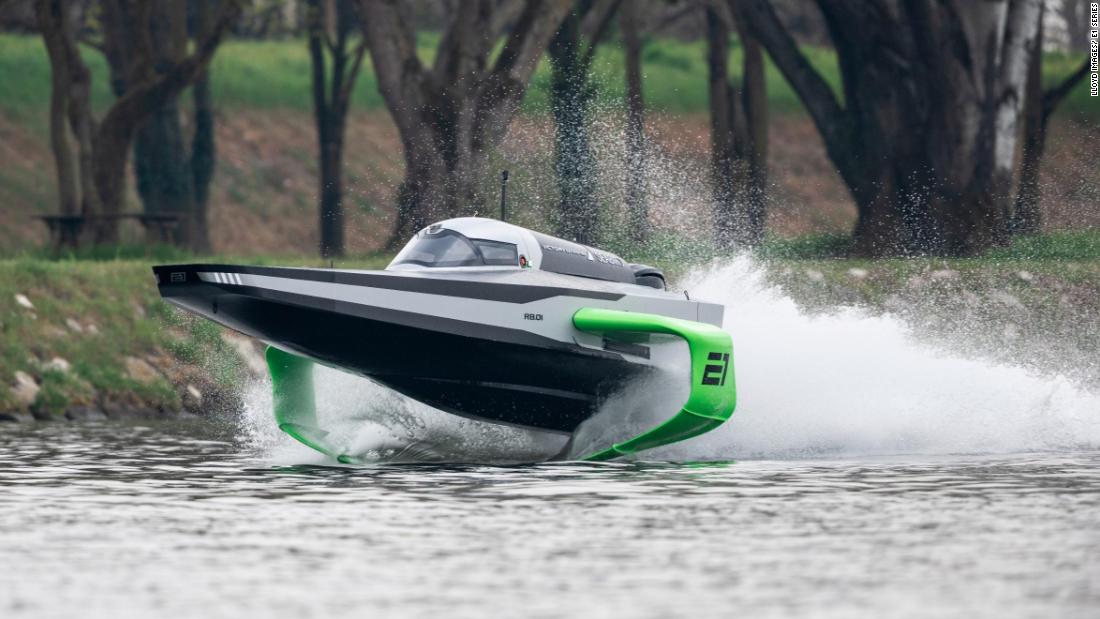 It’s called the “RaceBird” — a single-seater electric powerboat, with two bright green hydrofoils that allow it to glide above the water — and it’s the first prototype racecraft for the soon-to-be-launched E1 Series.

E1 is the brainchild of serial sports entrepreneur Alejandro Agag, who, having pioneered electric motorsport with both Formula E and its off-road counterpart Extreme E, is now looking to the rivers and oceans around some of the world’s biggest cities.

The idea emerged during the first lockdown of the pandemic, while the Spaniard was taking a walk by the River Thames with former F1 engineer and future E1 CEO Rodi Basso.

“I think the transition to cleaner mobility in the streets, off-road, in the water, (is) all part of the many solutions that together will have to be applied to try to mitigate the big challenge of climate change and global warming,” Agag told CNN.

Just as Formula E took electric racing to the streets of cities like New York, London and Hong Kong, the E1 Series will take its races to large urban waterways, with ambitions to secure events in the likes of Sydney Harbour, the canals of Venice, and off Sugarloaf Mountain in Rio de Janeiro.

But with a target launch date of Spring 2023, the focus is on the technology and the boat, ensuring that by the start of the championship, they have a race craft that doesn’t just float, but also “flies.”

Alongside Agag, Basso has brought a wealth of engineering experience to the table having previously worked at McLaren and Ferrari, as well as NASA, while Sophi Horne, the founder of boat maker SeaBird Technologies, joined the crew to draw up the designs for the RaceBird.

She told CNN that, despite its resemblance to an A-Wing starfighter from “Star Wars,” the inspiration for the boat came from closer to home.

“It’s very heavily inspired by natural, organic lines,” she explained. “I was spending a lot of time at my summer house in Sweden, and you see a lot of birds flying in what I call ‘glide mode’ — when they’re right over the surface of the water.”

That inspiration turned into the hydrofoils, similar in concept to those used before in electric surfboards, which allow the body of the RaceBird to lift around a meter off the water as it accelerates.

While the foiling system helps with the futuristic look of the boat, it also serves a technical purpose, reducing the water resistance, so that the speed can increase to 50 knots (58 miles per hour) with a battery range of 40 minutes.

In only eight months, Basso and Agag assembled a team of collaborators from various backgrounds, including battery developers Kreisel and boat specialists Victory Marine, to build the vessel.

“By the first test in March 2022, there were a lot of emotions and anxiety,” Basso said. “Having worked in racing for more than 20 years, I know that a racing vehicle is like a bottle of wine: you don’t know how it is until you open it up.”

By all accounts, the test went as well as could have been expected, with the RaceBird reaching 40 knots (80% of its ultimate target speed) on the first attempt, and, crucially, successfully lifting off the water as intended.

For Agag, it was a welcome surprise, having experienced a far more challenging first test session for Formula E back in 2013, when the car was only able to operate on 20% of its intended battery power.

“The first prototype in Formula E had a lot of glitches and problems,” he recalled. “Now, technology has advanced so much from Formula E that we’ve taken a lot of that experience and translated it into our prototype for E1.”

Another thing the Spaniard has carried over from Formula E is the “race to road” philosophy, which has seen manufacturers carry technological innovation from their race teams over into their road car operations.

One of the key motivations for starting the E1 Series, Agag said, is to help the marine industry catch up when it comes to sustainable transport.

According to the International Maritime Organization, the shipping industry accounts for around 2.5% of the world’s greenhouse gas emissions. While some shipping companies are looking to replace fossil fuels with biofuels, hydrogen, or liquified natural gas, the transition has been slow.

“I think the marine industry is where the car industry was about 10 years ago,” said Agag. “Of course, the challenges are different — batteries are well-suited for cars, especially in cities, but a big ship cannot be moved by a battery.

“But for small boats, we believe batteries are a really good solution. That’s why we’re pushing our RaceBirds to showcase a solution for the marine industry.”

In April, the first E1 team was announced — Venice Racing Team. Agag expects each of the teams to be linked to a host city in a bid to drum up local support, alongside sponsors for each team.

But it may prove difficult to match the success of Formula E. Where that could draw on motor sports’ global following, powerboat racing has a much smaller fanbase.

In the short term, Agag says that he would consider it a success if the E1 series is still going in five years. But in the long term, he said the goal is to see a wider adoption of electric boats around the world.

“At the moment there is very little space for electric boats,” said Agag. “But I think that’s going to change. We would like to be an agent for that change.”