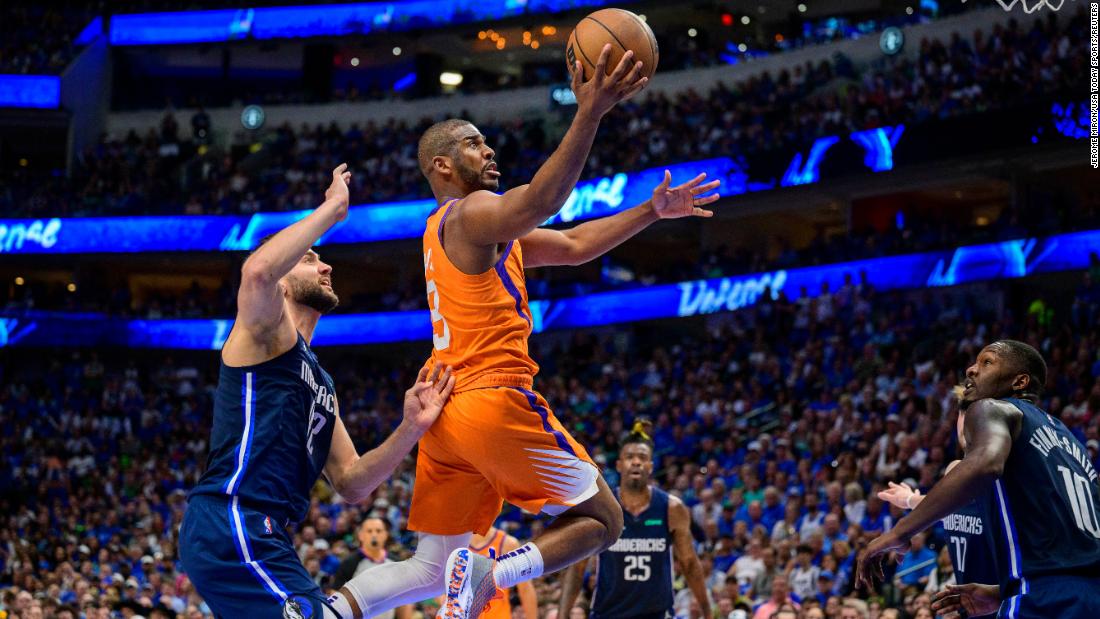 The game was overshadowed by an incident involving Suns guard Chris Paul’s family: ESPN reporter Dave McMenamin reported from a source familiar with the situation that Mavs fans allegedly touched Paul’s mother and pushed his wife in front of Paul’s children.

In a video seen on social media, a fan wearing a Mavericks jersey is being escorted out of the building with an angry Paul yelling out, “Hey! Hey! Hey! I’ll see you later! I’ll see you later!” It is not clear that the fan was the one who allegedly got physical with Paul’s family.

After the game, Paul wasn’t asked about the incident by reporters but tweeted, “Wanna fine players for saying stuff to the fans but the fans can put they hands on our families….f**k that!!”

In a statement to CNN, the Mavericks said, “The Dallas Mavericks are aware of an incident between a fan and the family of Chris Paul. It was unacceptable behavior and will not be tolerated. The Mavericks, along with American Airlines Center, swiftly removed the fan from today’s game.”

“I can’t put myself in the situations to give [the referees] that ability to do that,” Paul said according to ESPN. “I just got to look at myself and figure out how to be better.”

Consequently, the Suns were without Paul early in the fourth quarter, and the Mavs — led by Luka Doncic’s 26 points, seven rebounds and 11 assists — took advantage of his absence.

Though Doncic shot just 1-for-10 from downtown, the rest of his team compensated, netting 19-for-34 from behind the three-point line while the Suns could only muster 9-for-25.

Dorian Finney-Smith chipped in with a playoff career-high 24 points to go along with eight rebounds for the Mavs, including back-to-back threes midway through the fourth.

It has been a remarkable turnaround by the Mavs, who have rebounded after being blown away by the Suns in Games 1 and 2 of the Western Conference semifinals.

“We understand that it is a series and it’s the playoffs for a reason,” Devin Booker said to the media after the game, after he led the way for the Suns with 35 points and seven assists.

“The best teams in the NBA are here and nobody wants to lose. So just taking that all in, flushing this game and just coming out with the right mentality. If we’re worried about the last couple games the whole time, I think we’re at a disadvantage.”

Game 5 is set for Tuesday in Phoenix.

Meanwhile, in the Eastern Conference, the Philadelphia 76ers overcame Jimmy Butler’s 40-point performance to beat the Miami Heat 116-108 in Philly on Sunday night to knot up their playoff series 2-2.

With MVP candidate Joel Embiid sidelined by an orbital fracture and torn thumb ligament during the first two games, the Sixers toiled to a 0-2 disadvantage in the best-of-seven series.

But Embiid’s return, complete with a protective facemask, has helped buoy Philly. The Cameroonian had 24 points and 11 rebounds, while James Harden played his best game of the series, racking up 31 points, seven rebounds, nine assists and shooting 6-of-10 from deep.

“It’s just James being James,” Sixers head coach Doc Rivers said after the game. “I felt like he was going to have a big game tonight. You can just sense it.”

The 76ers took an eight-point lead into the break, shooting nearly 64% from the field during the first half.

However, Philly was unable to pull away as the team committed 16 turnovers which Miami converted into 24 points.

Butler did his best to keep the Heat in the game with his heavy scoring load to carry the team, but it wasn’t enough for Miami as the rest of the team did little to help.

Further complicating matters for the Heat was guard Kyle Lowry reinjuring his left hamstring, which has made him a doubt for Game 5.

The Heat will hope to sort out their offensive and defensive play for Game 5, which takes place on Tuesday in Miami.