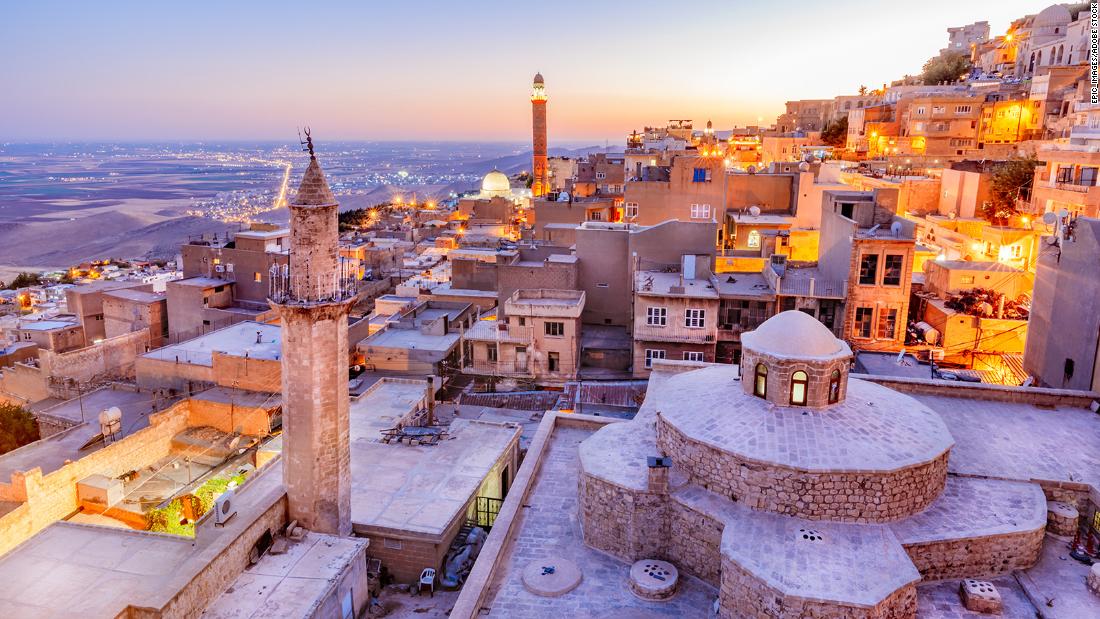 Editor’s Note — This CNN Travel series is, or was, sponsored by the country it highlights. CNN retains full editorial control over subject matter, reporting and frequency of the articles and videos within the sponsorship, in compliance with our policy.

(CNN) — Donkeys meander through narrow streets past doorways and through low arches, suddenly braying around corners at startled tourists while residents continue on their way, unperturbed.

Old stone walls reverberate with the gentle murmur of conversations in Arabic, Syriac, Armenian, Kurdish, Torani, Turkish and Aramaic, an ancient Semitic language once believed to have been used by Jesus.

This is Mardin, a city in southeast Turkey where thousands of years of history are visible around every corner.

Seen from above, Mardin’s shimmering white gold buildings form a line of terraces built on a hill looking across the plains to present-day Syria, but once upon a time the town was part of Mesopotamia, a region bounded by the Euphrates and Tigris rivers.

Located where major civilizations like the Sumerians and Babylonians came to power, Mardin has a complex history.

There’s history and culture around every corner in Mardin.

At one time or another just about everyone owned a piece of Mardin. Nabataean Arabs called it home from 150 B.C.E. to 250 C.E., but by the 4th century it was an important Syriac Christian settlement, established by the Assyrians. Then came the Romans and Byzantines.

In the 11th century, the Seljuk Turks set about making it their own but were thwarted by the arrival of the Artuqid Turkomans in the 12th century.

This dynasty, originally from northern Iraq (Diyarbakır in modern day Turkey), managed to stay in control for three hundred years, until the Mongols took the reins. They in turn were replaced by a Persian Turkoman monarchy.

Surprisingly, when Ottoman sultan Selim the Grim took over in 1517, there was still a Christian population living in the town. Today Mardin has a unique atmosphere and flavor due to this diverse ethnic and religious background.

Despite its ancient credentials, Mardin is a lively and dynamic town where the past lives on in the present.

Take Kırklar Kilisesi, also known as Mor Behnam, one of seven Syriac Orthodox churches. Originally constructed in 569 C.E., the Church of the Forty Martyrs, as it’s known in English, took its name when the relics of 40 martyrs were brought here in 1170.

Architecturally the church is simplicity itself. Outside, an elegant domed bell tower topped with a cross sits in a rectangular courtyard bounded by golden stone walls. Inside, regular services take place, part of an unbroken tradition carried out by Aramaic Christians for more than 700 years.

Queen of the snakes

A few streets away, the Mardin Protestant Church built by American believers more than 150 years ago now has an active congregation after being closed for nearly 60 years, while shop windows are adorned with paintings of the Shahmaran.

The mythical half-snake, half-woman Shahmaran gets its name from Persian. Shah means king (or in this case queen) and mar is snake so the Shahmaran was Queen of the Snakes. According to Anatolian folklore, she lived in Mardin.

The decorations on the Abdullatif Mosque from 1371 contrast dramatically with the austerity of the churches.

Its two large portals are so delicately carved it’s hard to believe they’re made from solid stone. A recessed stalactite carving forms the focal point, with vertical and horizontal patterned stonework surrounds.

The Deyrulzafaran (House of Saffron) monastery is the original seat of the Syriac Orthodox Patriarchate.

The mosque is a sublime architectural example from the Artuqid period, while Zinciriye Medresesi, a religious school dating from 1385, is another. The seminary, also known as İsa Bey Medresesi after the last Artuqid Sultan, has an imposing doorway that contains exquisite masonry technique. The ribbing on the rooftop stone domes makes them appear lighter than air. Pretty gardens lead to a small mosque containing an ornately carved mihrab niche which indicates the direction of Mecca.

Also worth a look is the post office, with good reason. Converted to public use in the 1950s, it came to the attention of domestic tourists in the early 2000s when it was used as the set for the highly popular Turkish miniseries “Sıla.”

The building was originally designed as a private home by Armenian architect Sarkis Elyas Lole in 1890. Steps lead through a small archway onto a grand terrace overlooking the Şehidiye Mosque to the empty plains beyond.

Lole also built the 1889 cavalry barracks that now house the Sakıp Sabancı Mardin City Museum. Displays include lifelike tableaux and contemporary exhibitions giving a clear sense of daily life in Mardin, both past and present.

Over in the Mardin Museum, located in the former Assyrian Catholic Patriarchate from 1895, ancient history is represented through artefacts from Mesopotamia and Assyria, Roman mosaics and Ottoman objects.

Mardin is said to take its name from its hilltop fortifications.

Walk in any direction and the streets of Mardin offer up gorgeous visuals, none more so than Ulu Camii, the Great Mosque. Although founded by the Seljuk Turks, its current form is largely due to Artuqid ruler Beg II Ghazi II.

He commissioned new works in 1176, with more completed by the Ottomans in the 18th and 19th centuries.

The surface of the mosque’s one remaining minaret is embellished with Seljuk, Artuqid and Ottoman inscriptions. This obsession with detail is reflected in tel kare, the filigree silver jewelry sold in many of the shops, although most of the pieces are produced in family-owned workshops in neighboring Midyat.

A few miles outside the city the sombre yet majestic Deyrulzafaran (House of Saffron) monastery and original seat of the Syriac Orthodox Patriarchate, is a must-see. This large walled complex was built on a site dedicated to the worship of the sun.

Although destroyed by the Persians and then looted by 14th-century Mongol-Turkic conqueror Tamerlane, the original underground sanctuary still exists.

Meanwhile, excavations at Dara, an important East Rome military city around 19 miles outside Mardin, have been ongoing since 1986.

The finds have been abundant, to say the least. The most recent was an olive workshop dating from the sixth century. This confirms the city was an important olive oil production and trade center, as well as the site of numerous military conflicts.

Many underground cisterns left over from Mesopotamia’s original irrigation system are open to the public. One is so enormous, locals refer to it as zindan, a dungeon, and tell stories of it being used as a prison. It descends 82 feet underground with access through the basement of a village house, provided you can find the man with the key.

Back in Mardin, another ancient attraction is the castle — during the Roman period the city was called Marida, an ancient Neo-Aramaic word meaning fortress.

The stronghold is very high up above the town and while a path leads almost to the gates, it’s not open to the public. Some might feel the effort (and risk of heatstroke in summer) worth it for the stellar views.

Others might just prefer to stay in town and enjoy a glass of wine. Most of the local winemakers are Assyrians. They follow ancient traditions and use regional grapes to produce wines completely different to those found elsewhere in the country. Definitely a fitting way to salute Mardin’s multicultural mix.