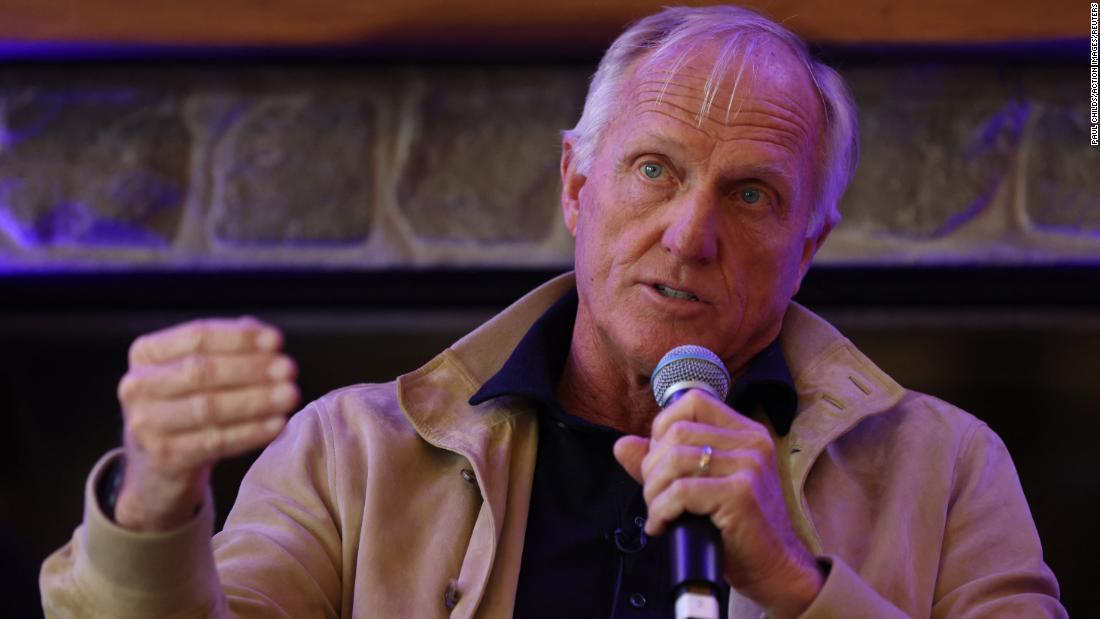 “This whole thing about Saudi Arabia and Khashoggi and human rights, talk about it, but also talk about the good that the country is doing in changing its culture,” Norman said at a LIV Golf event at Centurion Club in St. Albans, England. Norman is LIV Golf chairman.

“Look, we’ve all made mistakes and you just want to learn by those mistakes and how you can correct them going forward,” Norman said, according to news organizations in the UK.

A US intelligence report named Mohammed bin Salman, the Crown Prince of Saudi Arabia, as responsible for approving the operation that led to the 2018 murder of Khashoggi — something bin Salman denies.

The country’s human rights record is also widely criticized: political dissidents, human and women’s rights activists, journalists and online critics have historically been harassed, detained, prosecuted and incarcerated for denouncing the Saudi government, according to Amnesty International and other international human rights groups.

“I haven’t had a personal conversation with MBS, I’ve never met the guy, but at the same time I do read that the Saudi government has made their statements and comments about it and they want to move forward,” Norman said Wednesday.

Norman has previously said that the lucrative Saudi Arabia-backed golf league is a “new opportunity” for players and the sport.

Earlier this week, LIV Golf, which debuts this June, revealed a new $2 billion investment and expanded event schedule on Tuesday.

The lucrative Saudi Arabia-backed golf series says the latest financial commitment “will be used to fund ongoing expansion and prize purses for the new LIV Golf.”

LIV will “back players up”

The PGA Tour, in a memo dated Tuesday, has denied permission for players who wanted to play in the first event of LIV Golf, citing schedule conflicts.

The memo, which CNN has obtained from the PGA Tour, cites that the Saudi Arabia-backed golf series’ opening event in London is the same week as the RBC Canadian Open, a PGA Tour event.

“We have notified those who have applied that their request has been declined in accordance with the PGA TOUR Tournament Regulations,” the memo says. “As such, TOUR members are not authorized to participate in the Saudi Golf League’s London event under our Regulations.”

World No.1 Scottie Scheffler said he had not given the PGA Tour’s decision to deny golfers release waivers much thought.

“If you’re playing here on the PGA TOUR, playing in something that could be a rival series to the PGA Tour, being a member of our Tour, it’s definitely not something where we want our membership to do because it’s going to harm the tournament that we have opposite that and that’s, I’m sure that’s why they were, why they did not release the players,” said Scheffler.

“Because if we have 15 guys go over there and play, that hurts the RBC and the Canadian Open,” added Scheffler ahead of the first round of the AT&T Byron Nelson.

Norman said that LIV will “back up” players wanting to participate in LIV Golf. Asked if his legal team had injunctions in place to protect players in the face of any bans, Norman replied: “Yes.”

“It will be the player’s choice. I’m not going to begrudge any player who makes a decision to play wherever he wants. We’re giving them the ability because we believe LIV is here for a long period of time.

“If you want to go exclusively to the PGA Tour, happy days, go do it. I guarantee that a lot of people will come eventually to play with LIV Golf,” he said.

“I’ve said to the players, ‘we’ve got your back. Simple as that’. We will defend, we will reimburse and we will represent,” he added.