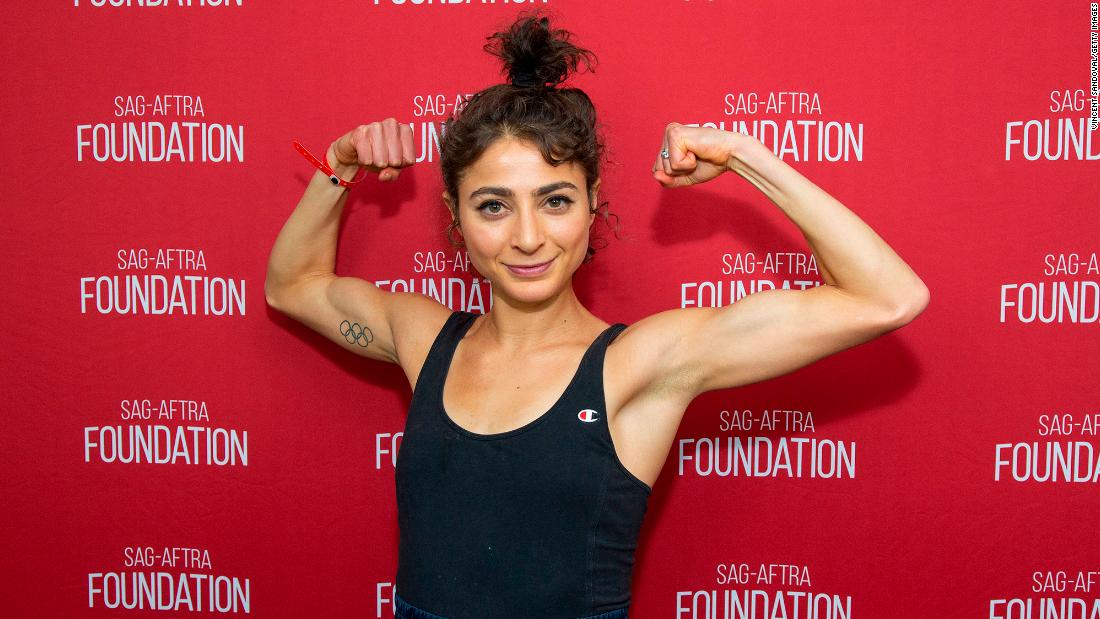 She is not only a professional athlete, but a filmmaker, actress and writer who lives with her husband Jeremy and their pug Bernini in Los Angeles.

Her social media is overflowing with photos of herself sporting colorful outfits from her sponsor, Champion, in scenic places from the mountains of Colorado to the beaches in Greece, each one captioned with a poem she wrote herself.

She comes across as bubbly, positive, creative, energetic … and all of those descriptors are true. Yet Pappas also happens to battle clinical depression.

“Just like when you fall down and break a bone and your bone can heal over time, you can almost fall down and have a metaphorical scratch on your brain,” Pappas tells CNN.

She firmly believes in the concept that mental health and physical health are one and the same.

“It’s really hopeful to think about it that way, because I knew even though I wasn’t going to feel better tomorrow, if I just focused on my actions, my thoughts and my feelings would change over time, just like a bone heals over time but not overnight.”

After losing her mother to suicide when she was four years old, Pappas and her family knew she needed to get help when she was at her lowest. “I grew up really scared that if I was ever sad like her that I would … have to go,” says Pappas.

However, with the right team of doctors and a strong support system behind her, Pappas has been able to navigate her way back from the brink.

“I think the more nuanced discussion here is about how if you’re challenged in your mental health, or if you’re having a challenge mentally, how that can affect your physical health,” notes Pappas. “That piece really interests me and it’s something that I’ve experienced firsthand.”

In her memoir “Bravey,” Pappas opens up about the physical repercussions of her depression, which often had her literally managing on just one hour of sleep a night — an unsustainable feat for anyone, but especially for an athlete running over 100 miles per week.

This cycle ultimately triggered a hamstring injury that sidelined Pappas long term for the first time in her life and sent her spiraling even further.

“I’ve learned that depression is a disease of depletion,” Pappas reflects. “The cells in our body just feel it as stress.”

Back in December 2020, after a year when many found themselves struggling with their own mental health in light of the isolation and loss caused by the Covid-19 pandemic, Pappas released a video with the New York Times that sparked global interest on social media.

In her video — “I Achieved My Wildest Dreams. Then Depression Hit” — Pappas revealed that after the unbelievable high of competing in the 2016 Olympic Games, the comedown left her at her lowest point.

“We might think that depression strikes when bad things happen,” says Pappas in the video, “but for me it happened right after the pinnacle of my life.”

Pappas strongly believes that the same support and treatments used for bodily injuries can be used to mitigate mental health challenges as well.

In addition to doctors and specialists who support athletes’ physical wellbeing, Pappas emphasizes the importance that “we open up the doors for those resources on the mental health side too.”

Those “resources” could be utilized to treat mental trauma as it arises, but they could also go a step further in helping to prevent the most dire mental health scenarios from occurring in the first place.

“The word ‘pre-hab’ is a word that we use with our physical health,” Pappas says. “That’s the things you do to prevent injury, and there are things we could do to prevent a mental health challenge too.”

Just as we go for annual physical exams and dental checkups to catch problems in their early stages, perhaps regular therapy check-ins could ensure athletes stay mentally healthy as well, according to Pappas.

While many programs have introduced sports psychologists to their teams, their impact can be limited by the stigmatization of mental health. Pappas herself admits that it was difficult to come to terms with her own struggles because of what she feared it would say about her.

“I thought that it said something about me that I wasn’t brave enough or ready to share. I thought it was shameful,” she says.

The 32-year-old Pappas, for one, is doing her part. “I’m trying to be more open so that people don’t have to feel that pain to that extent, and they don’t have to make choices that they don’t need to make,” she adds.

Pappas is also striving to be the type of teammate she had by her side during her darkest days.

“I found that the people that were there for me during my mental health crisis had this beautiful balance of letting me maintain my dignity,” Pappas explains. “A good supporter will let you feel helped and dignified at the same time.”

Everyone from her family and friends to her doctors understood the role they played in Pappas’ battle with depression.

As an athlete, Pappas was able to draw on her past experience as a member of a team when she needed to rely on others throughout her mental health journey, asserting “that’s the one thing that team sports really teach you — that belief and trust in another person.”

Belief and trust were two practices Pappas recently put to perhaps the most extreme test when she ran the 126th Boston Marathon as a guide for “Team With a Vision,” an organization that offers support to blind and visually-impaired runners in achieving their racing and marathon goals.

“I was connected with this athlete, Lisa, who has run the Boston Marathon so many times,” says Pappas. “It was so amazing … guiding and being right there with someone every step of the way and calibrating and listening to their needs.”

Her teammate, Lisa, won her division; from viewing Pappas’ social media, they also had some fun along the way — singing, laughing, and high-fiving onlookers as they raced by.

From the outside, it seems like a completely different journey from what Pappas went through when she found herself at the depths of her depression.

But in many ways, a marathon is the perfect metaphor for Pappas’ mental health journey: sometimes long and arduous, with the finish line improbably far off.

“I think if people can just walk away feeling like there is a path forward,” Pappas reasons, “and I don’t know my future, but I do know that I am help-able. That would be the greatest thing in the world.”