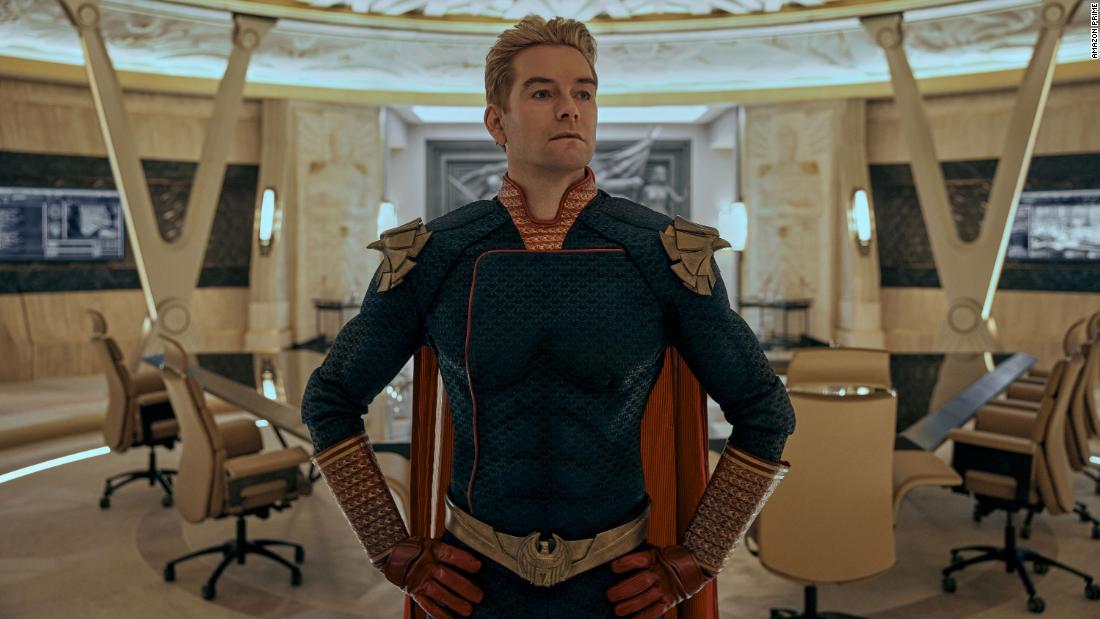 After last season’s ending involving the revelations regarding Stormfront, the show takes a small leap ahead that finds the key players having settled into their respective jobs and lives. Such harmony obviously can’t last for long, with the head of the superhero conglomerate Vought International, Stan Edgar (Giancarlo Esposito), dryly referring to overseeing caped crusaders as “a daycare dealing with spoiled children.”

The children, however, have their own ideas about what’s best, particularly the mercurial Homelander (Antony Starr), a truly terrifying blend of Superman-like powers with rampant insecurity and maliciousness. When he says, “No one can stop me,” it’s enough to send a chill down one’s spine.

Chafing against the restrictions Vought places upon him, Homelander faces a brewing conflict with Starlight (Erin Moriarty), whose relationship to Hughie (Jack Quaid), a member of the group that had been fighting against the Supes, becomes a source of friction and suspicion.

Battling against superheroes, though, creates unique ethical and moral quandaries, which is a major theme of this latest season, testing the Boys and their ruthless leader Butcher (Karl Urban) as to just how far they’ll go in terms of the risk to themselves and to others.

The series also introduces a key new player, portrayed by “Supernatural’s” Jensen Ackles, whose iconic history certainly shouldn’t be confused with anyone from the Marvel universe.

Under showrunner Eric Kripke, “The Boys” has and continues to exhibit a particularly sharp eye for the abuses inherent in superheroes and the worship of them, overlaying that with our current media and political culture. The heroes thus spend their spare hours strategizing with corporate PR, fretting about their popularity ratings and being apprised of how things play with “White men in the Rust Belt” among other demographics.

Vought, meanwhile, serves as an all-purpose stand-in for nefarious corporate greed, with tentacles that range from movies to TV to a theme park known as “Voughtland,” where the song “Everyone’s a hero at…” keeps playing incessantly with a definite “It’s a Small World” vibe.

Somehow, “The Boys” manages to test boundaries in a top-this way that can be insanely violent and bizarrely comical. The show takes detours to contemplate issues like the Black Lives Matter movement or superheroes blaming the media through the prism of this exaggerated world, all while barreling ahead and conjuring a near-constant state of dread about what might happen next.

Although not as widely celebrated as some other big-ticket streaming titles — or even Amazon’s more awards-friendly ones — “The Boys” has turned into a huge anchor for the service, and perhaps its signature show. That seems evident in the company’s eagerness to build off its niche of superheroic cynicism, including the animated series “Invincible” and more recently a spinoff of animated shorts, “The Boys Presents: Diabolical.”
Granted, critics can rightfully argue about whether the show’s determination to keep surpassing itself in shock value — think “Watchmen” on steroids — is destined to yield diminishing returns, if it hasn’t already.

For now, “The Boys” remains creatively fearless and, for those with the stomach for it, a great deal of fun. As creative combinations go, like Homelander, that one-two punch looks pretty near unstoppable.

“The Boys” begins its third season June 3 on Amazon.