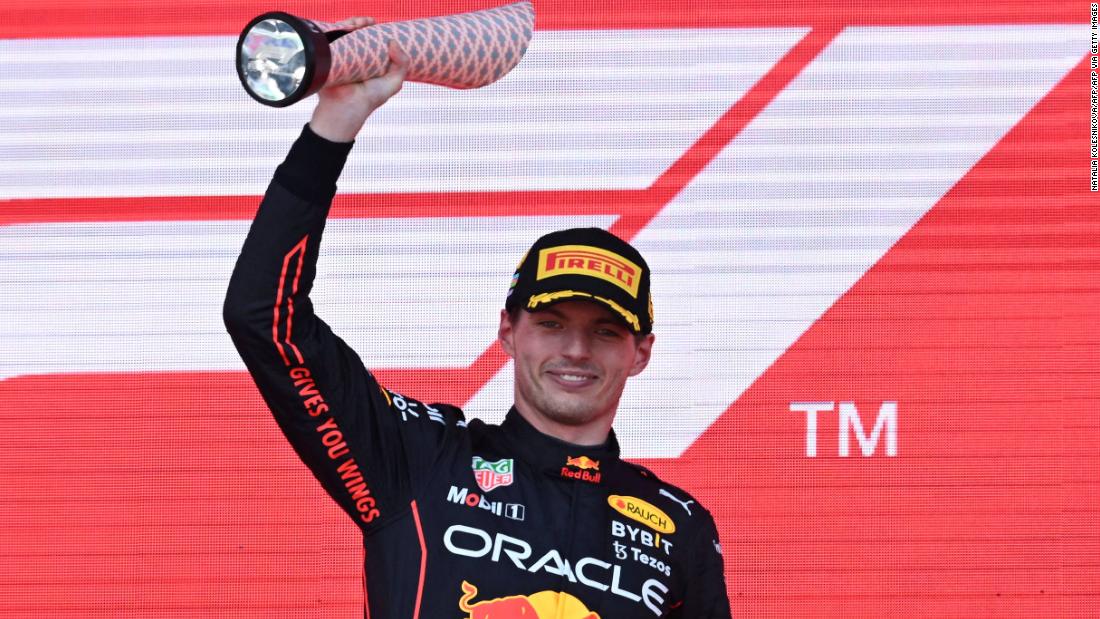 It was a perfect afternoon for Red Bull as the team secured a one-two, with Sergio Perez coming second and also earning the bonus point for fastest lap of the race.

But if it was a dream afternoon for Red Bull, then it was undoubtedly a nightmare for Ferrari, as both of its drivers — Charles Leclerc and Carlos Sainz — were forced to retire with engine failure long before the end.

In total, four cars powered by the Ferrari engine, including Zhou Guanyu’s Alfa Romeo and Kevin Magnussen’s Haas, retired from the grand prix.

It was a particularly impressive drive from Hamilton, who started in seventh and said he was struggling with serious back pain exacerbated by his car’s instability, a car Mercedes team principle Toto Wolff called a “s***box to drive” in his post-race radio message to Hamilton.

Verstappen’s victory means the Dutchman surpasses Sebastian Vettel’s record of most podium finishes in a Red Bull car, with 66 top three finishes in his 126 races with the constructor.

READ: Sergio Pérez to stay at Red Bull until 2024 after signing contract extension

It was also redemption of sorts for Verstappen, who crashed out when leading last year’s Azerbaijan Grand Prix due to tire failure.

“You can never make up what you lost last year,” Verstappen said on Sky Sports. “But today we had incredible pace and we could look after the tires. We were a tiny bit lucky with the retirements but our car was really good today. Overall, really happy with the balance of the car.

“Tire behavior, together with general grip of the car, that’s what you need around here. In the end, to have one-two as the team is a really good day for us

“I think every weekend is a bit different, you really have to be precise and do little things for race management.”

After his retirement, Leclerc said today “hurts” for both him personally and for the team.

“We’ve been fast and we didn’t have particularly big problems in the first part of the season … but we didn’t change massive things, if anything we made things better.”

But there will be little time for Ferrari to fix its problems, as the teams head to the Circuit Gilles Villeneuve for the Canadian Grand Prix next weekend.