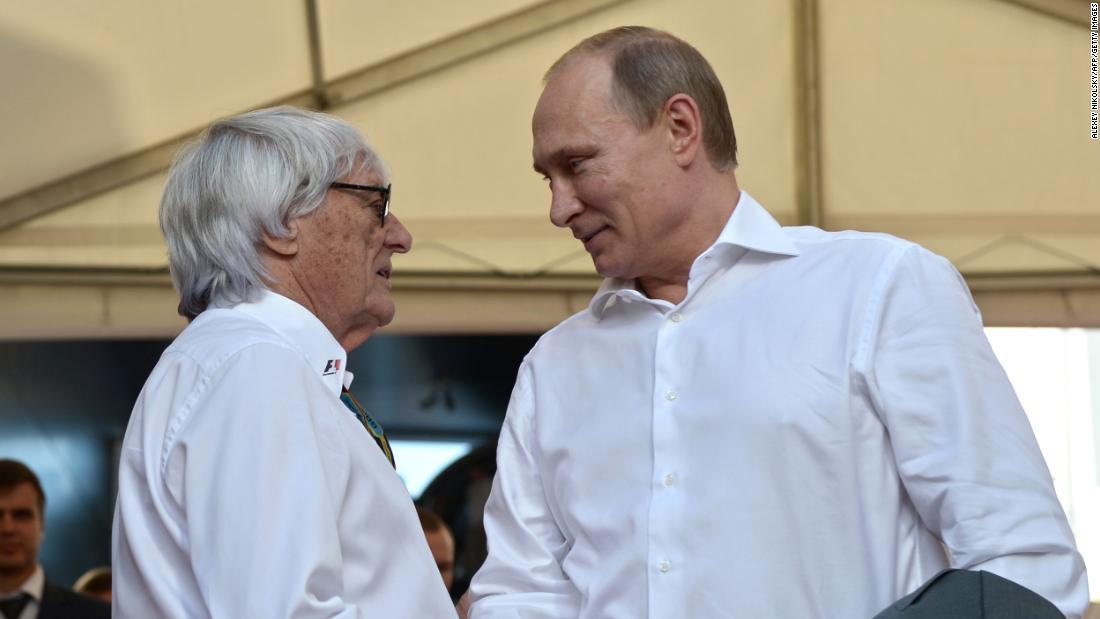 When asked on British TV show Good Morning Britain if President Putin was still a friend of his, the 91-year-old Englishman said on Thursday: “I’d still take a bullet for him. I’d rather it didn’t hurt, but I would still take a bullet.”
Nearly five months after Russia invaded Ukraine, the conflict continues. Thousands of lives have been lost and millions have been displaced, according to the UN, and though Kyiv racked up a series of early victories in the initial aftermath, the tide appears to be turning in the Kremlin’s favor, especially in the east.

“What he’s doing is something that he believed was the right thing,” Ecclestone said of the war.

“Unfortunately, he’s like a lot of businesspeople, certainly like me, that we make mistakes from time to time and when you make the mistake, you have to do the best you can to get out of it.”

Ecclestone, who was replaced as chief executive of F1 in 2017 after nearly four decades in charge, also went on to criticize Ukrainian President Volodymyr Zelensky’s handling of the invasion.

“The other person in Ukraine … his profession I understand, he used to be a comedian — and I think it seems that he wants to continue that profession,” he said.

“I think if he’d thought about things, he would definitely have made a big enough effort to speak to Putin, who is a sensible person, and would have listened to him and could have probably done something about it.”

When questioned on the fact Russia’s invasion of Ukraine had claimed the lives of thousands of innocent people, Ecclestone replied: “It wasn’t intentional.”

And asked whether Zelensky could have done more to stop the war, Ecclestone said: “Absolutely.”

In a statement sent to CNN, Formula 1 said: “The comments made by Bernie Ecclestone are his personal views and are in very stark contrast to the position of the modern values of our sport.”

At the time of publication, the FIA, motorsport’s governing body, had yet to respond to CNN’s request for a comment.

The British billionaire is no stranger to controversy. In 2009, he praised Adolf Hitler for being “able to get things done” — comments he later apologized for — and said that women should dress in white “like all other domestic appliances.”
In 2020, in the aftermath of George Floyd’s murder, Ecclestone told CNN that “Black people are more racist than what White people are.”

Following those comments, F1 issued a statement on its website saying it “completely disagreed” with Ecclestone.

Ecclestone and Putin have long been allies. Their relationship was key in establishing the Russian Grand Prix, which made its debut in Sochi in 2014.

That same year, while at the helm of F1, Ecclestone told CNN that he “completely agrees” with anti-gay legislation introduced by Putin, prohibiting the spreading of so-called gay propaganda to minors, arguing critics had misrepresented Putin.

And in an interview aired on February 25 this year, just a day after Russia invaded Ukraine, Ecclestone described Putin as “honorable.”

“As a person I found him very straightforward and honorable,” he told Times Radio. “He did exactly what he said he was going to do without any arguments.”

On the British morning show, Ecclestone also commented on Nelson Piquet’s use of a racist slur aimed at Lewis Hamilton, for which the Brazilian has since apologized.

Three-time world champion Piquet — who won two of his three world titles while driving for the team that Ecclestone used to own, Brabham — used a Brazilian Portuguese racial slur to describe seven-time champion Hamilton when addressing a high-speed collision involving Hamilton and Max Verstappen during the British Grand Prix last year.

On Wednesday, Piquet addressed his comments, which were made in November last year but only came to light recently, when the interview was released on Monday.

Piquet said the racial slur he used had no racist intent, saying he strongly condemned “any suggestion that the word was used by me with the aim of belittling a driver because of his skin color.”

Ecclestone said he was “surprised Lewis hasn’t just brushed it aside, or better than that, replied.”

He added: “It’s probably not appropriate with us, but probably, it isn’t something terrible that happens if you said that in Brazil.

“But people say things, and people talk about people if they happen to be little bit overweight, or a little bit undersized like me. I’m quite sure people have made remarks about that. If I’d have heard it, I’d have been able to deal with it myself without too much trouble.”

Formula 1, Hamilton’s team Mercedes, and the FIA on Tuesday condemned Piquet for using the racial slur.

Hamilton, who has the most race wins in F1 history, said the “time has come for action” on racism, and responded to Piquet’s comments in a series of posts on Twitter, writing: “Vamos focar em mudar a mentalidade” — Portuguese for “Let’s focus on changing the mindset.”

George Ramsay and Amanda Davies contributed to this report.