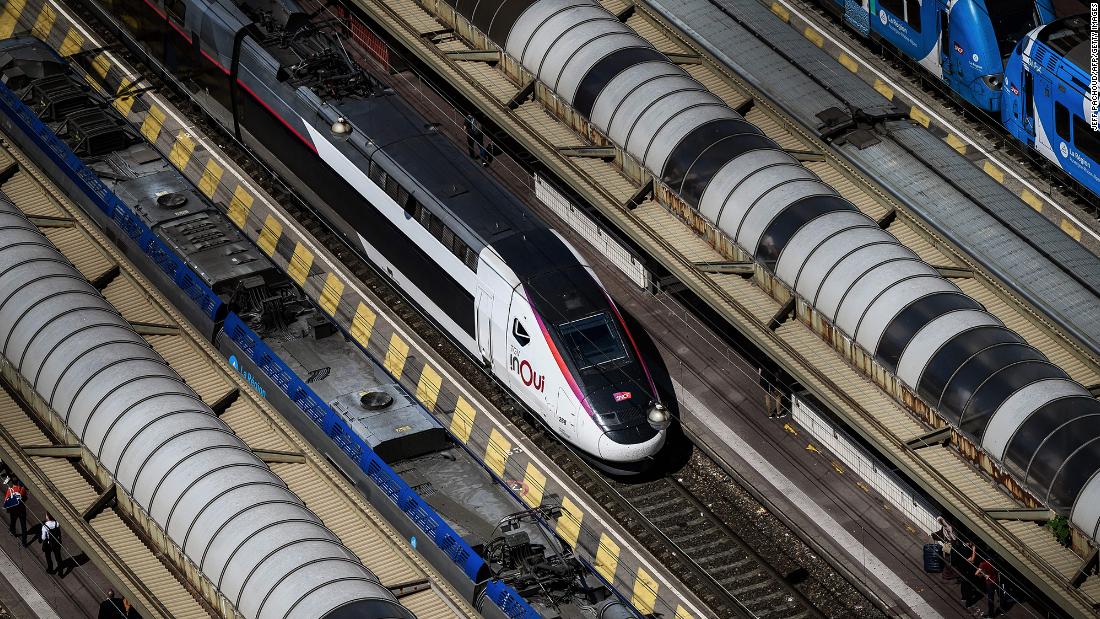 (CNN) — Breakfast in Paris, lunch in Frankfurt and dinner in Vienna — all without the hassle and frustration of flying.

Imagine a network of modern, super-fast and comfortable trains hurtling between every major city in the European Union, providing a reliable, comfortable and sustainable alternative to air travel.

That was the vision outlined by rail industry leaders in Lyon, France, on June 29, amid ambitious European plans to double high-speed rail use by 2030 and triple current levels by 2050.

Only a massive — and accelerated — expansion of the high-speed network can achieve these hugely ambitious targets, but are they a realistic and affordable proposition?

Unlike many parts of the world, Europe already has thousands of kilometers of dedicated high-speed railway.

That’s no surprise. When countries are investing billions of euros in new infrastructure, political pressure to squeeze out the maximum benefit for taxpayers is inevitable.

Building lines across international borders, even within the European Union, creates tension over who pays for what, how the contracts are allocated, conflicting national standards and regulations and a host of other obstacles.

For decades it’s been too easy to kick difficult projects down the road until they become someone else’s problem.

Even where international high-speed lines have been built — often at enormous cost — national loyalties, stifling bureaucracy and high access charges are preventing some routes from fulfilling their potential.

Others, such as Paris-London via the Channel Tunnel and Paris-Brussels-Amsterdam/Cologne are more successful but could — and should — be luring many more passengers away from short-haul air travel.

Now a body of European organizations have committed to a new study highlighting the numerous benefits of an expanded high-speed rail network connecting national capitals and major cities.

Most importantly the group will investigate how to pay for tens of thousands of kilometers of new lines and how a radical transformation of the continent’s rail network can help the EU deliver on its “Green Deal’ objective of carbon neutrality by 2050.

Some of that expansion will come on new routes that are planned or under construction but many more will be needed to facilitate the vision of European leaders.

Alberto Mazzola, executive director of the Community of European Railways told CNN Travel the group wanted a “masterplan” showing the socio-economic benefits of high-speed links between the continent’s major cities.

Spain has invested heavily in its own high-speed rail network.

“While a lot has been achieved so far — Paris-Lyon, Milan-Rome, Barcelona-Madrid and Berlin-Munich are national success stories for rail — much more is needed if the ambitious objectives of the European Green Deal and Smart and Sustainable Mobility Strategy are to be met,” he said. “If we build it, where should it go?”

And that’s where the first round of battles will be fought.

Reaching an agreement on which routes to prioritize, which cities will benefit (and which will miss out) will cause huge arguments between competing interests.

With the shape of the final network likely to have a massive influence on the future development of Europe and its cities over the next 100 years, cities will be desperate to stake their claim.

While some EU officials have hailed the proposals as the future of sustainable travel in Europe, provided operators can make it efficient and cost-effective, others have struck more cautious notes.

Eurostar trains from Paris to London won’t be linked seamlessly to a new high speed north-south line being built in the UK.

“Unfortunately we’ve heard it all before and this sounds like the railways over-promising again. Experience tells us that they can’t deliver this kind of network in the timescales they’re suggesting.”

More than any other country to date, France has invested in new links with its neighbors, building international routes to Belgium, the UK, Germany and Spain.

The Lyon-Turin route now under construction, controversial because of environmental impact and questions over financial probity, will add a fast link under the Savoy Alps between France’s second city and the industrial cities of northern Italy.

Sitting in the center of Europe, sharing borders with nine other nations, Germany will play a major role in any pan-European network. The German government’s “TEE2.0” proposal to reboot the old Trans-Europe Express is an extension of its $88 billion “Deutschland Takt” (regular interval timetable) program, announced in 2019, which aims to provide fast and frequent inter-city rail services between all German towns and cities over a certain size by 2030.

But the biggest benefits could be felt elsewhere, in countries currently without any high-speed railways. The Czech Republic is working with the French railway industry to develop new 350 kilometers per hour (217 mph) lines that will revolutionize journey times between Prague, Brno and Ostrava and deliver much faster international links between Austria, Slovakia, southern Poland and eastern Germany.

Germany has its own Intercity Express (ICE) high-speed train network.

Poland also plans to join the high-speed club with routes planned to radiate from Warsaw to Lodz, Wroclaw and Poznan. Extensions towards Prague and Bratislava are also planned in co-operation with its neighbors, although they are not likely to materialize until the 2040s.

More problematic are busy international routes that cross the Alps or the Pyrenees — natural barriers that have been a challenge to travelers for centuries.

A good example is Munich in southern Germany to Milan in northern Italy. These industrial powerhouses are less than 500 kilometers (300 miles) apart, closer to each other than to their respective national capitals, but separated by the Alps.

Slow rail and road connections mean that airlines pick up most of this short-hop inter-city business, but faster, direct trains could flip that share in rail’s favor.

When it opens in 2032, the 64-kilometer-long Brenner Base Tunnel between Innsbruck, Austria and Fortezza in Italy will cut around 70 minutes off existing schedules.

According to EU statistics, 17 of the 20 busiest air routes in Europe cover distances of less than 434 miles (700 kilometers) — exactly the kind of distances where city center-to-city center trains can offer faster, cleaner and more sustainable journeys — if the right infrastructure exists.

A Paris-Berlin flight generates at least six times the carbon dioxide emissions of a similar train journey, according to a joint report from environmental organizations in Germany, Poland, Spain and France. Flights of less than 621 miles (1,000 kilometers) between and within European countries are estimated to create 28 million metric tonnes of CO2 every year.

And according to Alberto Mazzola of the Community of European Railways, carbon emissions trading could be a key tool in funding the massive investment required to complete a Europe-wide high-speed rail network.

“The EU’s total CO2 emissions are around 3.8 billion tonnes every year — transport accounts for more than one billion tonnes of that. But if we reduce the current carbon allowances for the aviation and road sectors the additional revenue could be used to fund improvements to public transport.”

Excess carbon emissions from airliners, trucks and cars are currently charged at 50 euros per tonne in the EU, but this could soon rise to €80 per tonne. If just 10% of that revenue is re-invested in transport it could add around 8 billion euros a year to the pot for rail upgrades.

“I sense that there’s a real positive willingness to invest in modal shift now, but we need to move quickly,” Mazzola adds.

France’s TGV trains have been delivering high-speed services for decades.

Just as important as civil engineering and sleek new trains, technologies such as digital signaling, automatic train operation, big data and improved ticketing will be critical to improving rail travel and attracting millions of new passengers.

A top priority for the Community of European Railways is the creation of an independent ticketing platform by 2025, bringing together all available fares and timetables across Europe.

By 2030 this information could be integrated with other transport modes, offering travelers door-to-door information and fares for their journey, whether it’s by train, bus, bike or tram — or a combination of modes.

This level of integration is already standard in Austria and Switzerland and, to a lesser extent, Germany, but elsewhere in Europe the quality of information is patchy to say the least.

Despite the best efforts of some governments and state-owned operators, competition on high-speed routes is proving popular with passengers in Italy and Spain, delivering improved services, higher frequencies and lower fares.

Organizations such as ALLRAIL are pushing for similar reforms elsewhere in the EU, but progress is frustratingly slow.

“We want to see high-speed trains with 1,000 seats each connecting places around Europe on a frequent basis,” says Nick Brooks, secretary general of ALLRAIL.

“This will lead to low fares and high revenue. While other competing long-distance transport modes are setting themselves ‘net zero’ emission targets, rail can do it bigger and better. The outcomes of this study must enable high-speed rail to become the backbone of long-distance travel in Europe.”

While sleek high-speed trains steal the headlines and attract investment, many more people will directly benefit from the modal shift possible through better local and urban train services and transferring freight from roads to rail benefits everyone.

However, delivering such a wide-ranging, ambitious and costly package of new rail projects across more than 20 countries with differing priorities and budgets is fraught with difficulty, especially in times as uncertain as these.

Collectively, it’s estimated that European railways lost more than $52 billion during the pandemic. Compensation from the EU and national governments has so far filled only around one-fifth of that gigantic hole.

Equally worrying is the estimated 20% drop in regular weekday commuter traffic, the long-time backbone of railway revenue. Although long-distance and leisure travel has recovered much more strongly, railway managers worry that cuts could become inevitable if they don’t close the gap.

The sheer scale of the proposals also means that it will take many years to deliver the necessary work, even if things go as planned.

Financial support from emissions trading and the EU will doubtless help in many cases, especially in Eastern and Central Europe, but it remains to be seen whether the European Union can follow China’s example in building a hugely ambitious network of high-speed railways in such a short timescale.